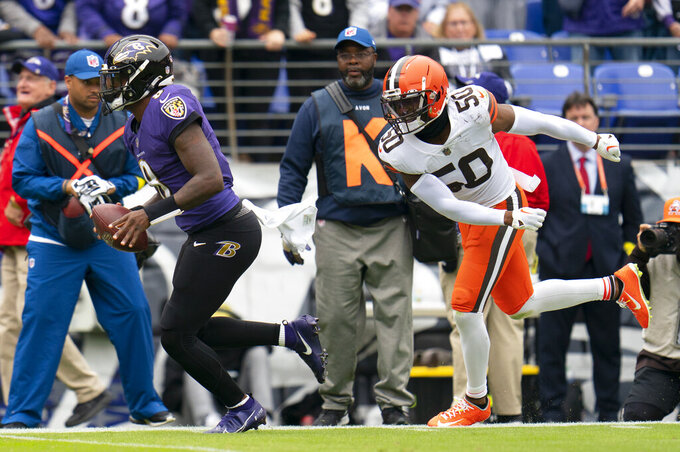 Cleveland Browns linebacker Jacob Phillips (50) tries to push Baltimore Ravens quarterback Lamar Jackson (8) out of bounds on a rushing play during the first half of an NFL football game, Sunday, Oct. 23, 2022, in Baltimore. The Ravens won 23-20. (AP Photo/Julio Cortez)

Coach Kevin Stefanski said Phillips is likely done for the season and will need surgery. He got hurt while making a tackle in the second half of Cleveland's 23-20 loss to the Ravens. The Browns (2-5) have dropped four straight.

A third-round pick from LSU in 2020, Phillips played in just four games last season after he suffered an injured biceps in a training camp practice against the New York Giants. A knee injury limited him to seven games as a rookie.

Phillips had been handling signal-calling duties since linebacker and captain Anthony Walker Jr. sustained a season-ending quadriceps injury in Week 3. He leads the Browns with 46 tackles and has two sacks.

With Phillips out, Deion Jones, recently acquired in a trade from the Atlanta Falcons, is likely to start and handle play calls.

The Browns are hoping to get top cornerback Denzel Ward back to face Cincinnati on Monday night. He's been in concussion protocol for two weeks.