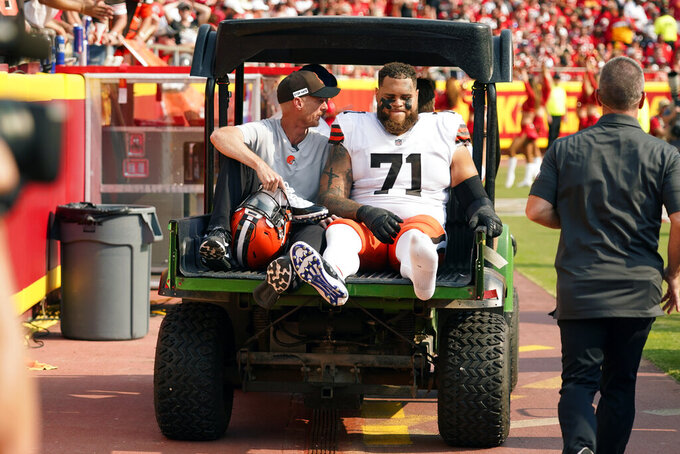 Cleveland Browns offensive tackle Jedrick Wills Jr. (71) is taken off on a cart during the first half of an NFL football game against the Kansas City Chiefs Sunday, Sept. 12, 2021, in Kansas City, Mo. Wills was injured while blocking on a Jarvis Landry touchdown run in the first quarter. Browns coach Kevin Stefanski did not provide a specific timeline on Wills' return. (AP Photo/Charlie Riedel)

Wills was carted off the field after he got hurt while blocking on wide receiver Jarvis Landry's 5-yard touchdown run in the first quarter. The 10th overall pick in the 2020 draft, Wills did not return and was replaced by versatile veteran backup Chris Hubbard.

Browns coach Kevin Stefanski did not provide a specific timeline on Wills' return.

“We'll see how he progresses through the week,” Stefanski said Monday on a Zoom call. “He's day to day.”

It's the second straight time Wills has been hurt at Arrowhead Stadium. He suffered a more serious ankle injury in the Jan. 17 playoff game against the Chiefs on Cleveland's first offensive snap.

Hubbard, who is coming back from a season-ending knee injury, will likely stay in the starting lineup while Wills recovers. The Browns play Houston in their home opener on Sunday.

“I thought Hub had some good moments,” Stefanski said when asked about Hubbard. "We called on him in the past to play right tackle, in this case left tackle. He has played inside for us, That's the nature of this game, that sixth man.

“He performed admirably and if Jed is unable to go he'll be the guy who will be in there.”

Beckham was inactive for the opener, delaying a possible debut after his 2020 season ended on Oct. 25 with a tore anterior cruciate ligament against Cincinnati. Beckham has made a quick recovery following surgery.

Beckham has taken part in team drills for two weeks and he seemed on the brink of his return. The Browns listed him as questionable going into the matchup with Kansas City.

However, after Beckham went through pregame warmups Sunday, the Browns ruled him out.

“I wouldn't call it a conservative approach," Stefanski said when asked if the Browns are being overly cautious with Beckham. "I would say we're trying to be appropriate with all this. Ultimately, he's coming off a major surgery and we're going to work through it day by day.