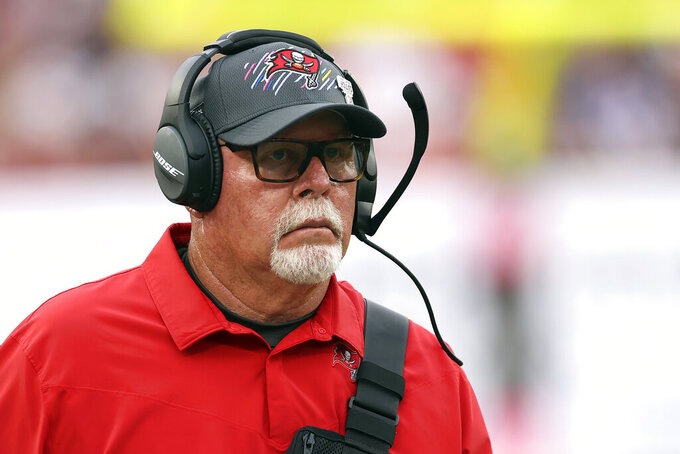 TAMPA, Fla. (AP) — Tampa Bay’s 6-2 record halfway through the NFL season is impressive unless you consider so much more is expected of the defending Super Bowl champions.

Tom Brady has done his part, leading the league with 25 touchdown passes and ranking second with 2,650 yards in eight games. However, the Buccaneers as a team have not been nearly as consistent as they’ll need to be to make another deep playoff run.

Injuries, particularly on defense, have been a factor. So have penalties, which were a focal point leading into last week’s bye.

The Bucs were flagged 11 times for 99 yards during a nine-point loss at New Orleans in their last outing before the bye, prompting a terse answer from Bruce Arians when the coach was asked what his team needed to improve moving forward.

He talked to players about that when the defending champs reconvened for practice Monday.

“No Bucs beating Bucs. That stuff is just old. We can’t have that creeping back up for us to be a team that we want to be,” linebacker Lavonte David said.

“We just can’t go out there and beat ourselves. ... This game is already hard to win, so when you add on penalties and stuff like that, it’s going to be even tougher,” David added. “We’re not trying to put that on ourselves.”

No one's alarmed, though.

As linebacker Devin White noted, the Bucs have only lost two games. They dropped three of four heading into their bye week last season and returned to go 8-0 down the stretch, including three road playoff wins and a rout of Patrick Mahomes and Kansas City in the Super Bowl.

Arians said that underscores that the Bucs have to be prepared to play their best every week.

“That’s one of the things we actually talked about this morning: respecting the process of working. It doesn’t show up on Sunday. It shows up Wednesday, Thursday, Friday,” Arians declared.

“Our expectation is to win every game, but we can only do that this week,” Arians added. “Our expectation right now is just to practice as hard as we can to eliminate the mistakes that we’re making in games and play better each week. No long-term goals other than to make sure today was the best day we had.”

Brady is on course to set personal bests for yards passing and touchdowns in a season, and the Bucs offense continues to put up big numbers despite injuries that have cost Rob Gronkowski and Antonio Brown significant playing time.

The defense hasn’t been as dominant as it was during last winter’s Super Bowl run. However, injuries are as responsible for that as much as anything. If, as expected, cornerbacks Sean Murphy-Bunting, Carlton Davis and Richard Sherman eventually return to bolster the secondary, the Bucs are confident there will be a noticeable change in the results on the field.

Brown has been making the most of the opportunity the Bucs gave him to revive his career after the NFL suspended the receiver eight games for violating the league’s personal conduct policy. He joined the team halfway through last season and played a key role down the stretch. He’s been even better this year, even though he sat out the past two games with an ankle sprain that has him in a walking boot.

Running back Ronald Jones was benched after losing a fumble in the season opener and missing a block in pass protection the following week. And with Leonard Fournette regaining the form that helped establish him as a three-down back early in his career, there haven’t been a lot of opportunities for Jones to crack the lineup. After leading the team with 978 yards rushing a year ago, Jones has 194 yards and one TD through eight games.

Murphy-Bunting (dislocated elbow) and receiver Scotty Miller (turf toe), who have been on injured reserve, have begun their 21-day practice periods and could be activated as soon as this week. Gronkowski (ribs), Brown (ankle), Sherman (hamstring) and Davis (quad) remained sidelined when the Bucs reassembled Monday, however their status will be reassessed later in the week.

17 — One critical area where the Bucs are looking for more production the second half of the season is the pass rush. They have 17 sacks at the mid-point after finishing last season with 48, the fourth-highest total in the league.

The season resumes Sunday at Washington. That continues a stretch in which the defending champions will play four of five games on the road. That doesn’t mean the schedule is especially tough the rest of the way. The Bucs have just two games remaining against teams that currently have a winning record. Both of those opponents — Buffalo and New Orleans — visit Raymond James Stadium in early December.