Cardinals try to improve to 5-0 against skidding 49ers 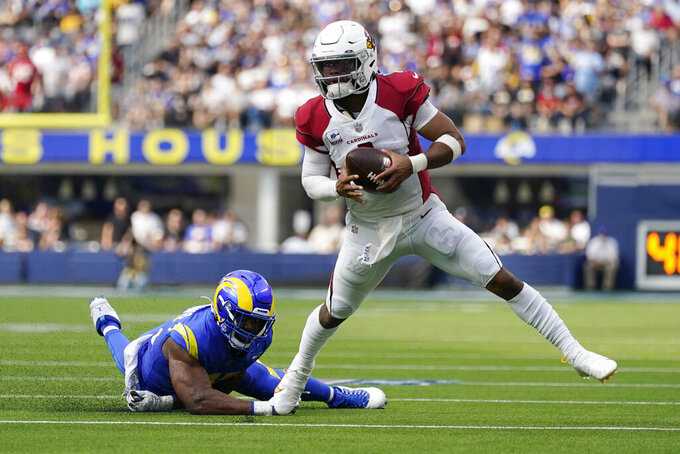 OPENING LINE: Cardinals by 5 1/2, according to FanDuel SportsBook.

TURNOVER DIFFERENTIAL: 49ers minus-5; Cardinals plus-5.

49ERS PLAYER TO WATCH: WR Deebo Samuel had eight catches for 156 yards and a career-high two TDs last week. Samuel leads the NFL with 490 yards receiving. That’s the second most in franchise history to Jerry Rice’s 522 in 1995 and most by anyone in the NFL since Julio Jones had 502 in 2018.

CARDINALS PLAYER TO WATCH: RB Chase Edmonds had 12 carries for 120 yards last week for his second most productive game on the ground for his career. Edmonds is averaging 5.93 yards per carry this season, third best among qualifying running backs.

KEY MATCHUP: The Arizona offensive line will get a test against the 49ers' pass rush. Defensive linemen Nick Bosa (four sacks) and Dee Ford (three) have been a problem for opposing teams all season. Arizona's line has held up remarkably well considering injuries to multiple starters. The Cardinals could get a boost if RT Kelvin Beachum (ribs) is able to return.

KEY INJURIES: San Francisco QB Jimmy Garoppolo will miss the game with a calf injury that knocked him out last week. Rookie Trey Lance will start in his place. ... TE George Kittle (calf) is doubtful. ... RB Elijah Mitchell should return from a shoulder injury that sidelined him the past two weeks. ... Slot CB K’Waun Williams (calf) remains sidelined. ... Arizona CB Byron Murphy (ribs) will miss the game. ... Beachum returned to practice on Wednesday and is questionable for the game.

SERIES NOTES: The Cardinals have won nine of the past 12 in the series, though the 49ers have taken three of the last four. ... The past nine games between the two teams have been decided by 10 points or less.

STATS AND STUFF: Lance was 9 for 18 for 157 yards and two TDs last week. ... The Niners became the first team in seven years to force three-and-outs on the first five drives of a game last week vs. Seattle. San Francisco’s 11 forced three-and-outs the past two weeks are third most in the NFL. ... San Francisco is tied with Jacksonville with a league-low one takeaway this season and has the third-worst turnover margin at minus-5. ... Samuel became the first player since 2018 with two TD catches of at least 75 yards when he added a 76-yarder last week to the 79-yarder he had in the opener vs. Detroit. ... The Niners' first 12 TDs of the season were scored by 12 different players before Samuel broke that stretch with his second and third TDs last week. ... San Francisco rookie RB Trey Sermon rushed for 89 yards vs. Seattle, more than doubling his total of 39 coming into the game. ... Arizona is the final undefeated team in the NFL and has a 4-0 record for the first time since 2012. The Cardinals are trying to improve to 5-0 for the first time since 1974. ... Cardinals WR Rondale Moore and SF's Samuel have the three longest offensive touchdowns this season. Moore has a 77-yard TD while Samuel has the scores from 76 and 79 yards ... QB Kyler Murray is completing 79.4% of his passes over the past three games. He's the first QB in franchise history to complete more than 75% of his passes in three straight games ... Four Cardinals receivers — A.J. Green, Christian Kirk, DeAndre Hopkins and Moore — have at least 200 yards receiving this season. TE Maxx Williams is right behind them with 179.

FANTASY TIP: The Cardinals' defense might be a decent play this week, especially with the 49ers starting a rookie quarterback. Arizona has made a lot of big plays with 10 sacks (tied for 10th in the NFL) and four interceptions (seventh).