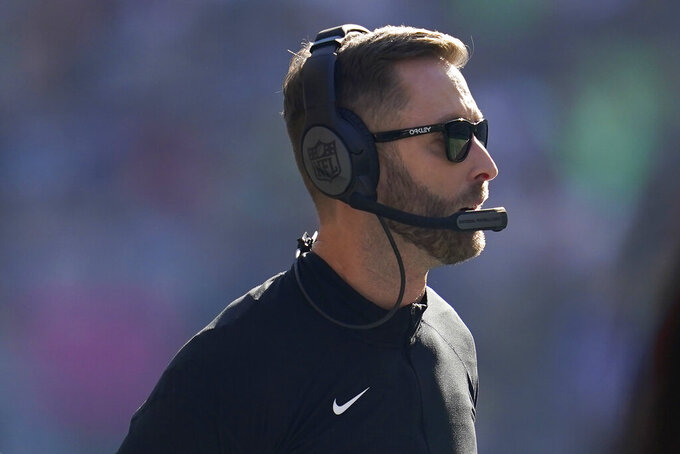 Arizona Cardinals head coach Kliff Kingsbury watches from the sideline during the second half of his team's NFL football game against the Seattle Seahawks in Seattle, Sunday, Oct. 16, 2022. (AP Photo/Abbie Parr)

TEMPE, Ariz. (AP) — Three-time All-Pro receiver DeAndre Hopkins is back on the field after serving his six-game suspension.

That won't fix all of the problems for the Cardinals, but it's certainly a good start.

Arizona's in the midst of a midseason offensive makeover, celebrating the return of Hopkins while also adding receiver Robbie Anderson in a Monday trade with the Panthers. The Cardinals hope the Hopkins-Anderson combo can make up for the loss of leading receiver Marquise Brown, who has a foot injury and will likely miss several weeks.

They also hope the roster shakeup will revive an offense that has been among the worst in the NFL. The Cardinals (2-4) lost to the Seahawks 19-9 on Sunday in a game that they didn't score an offensive touchdown.

“We can't expect (Hopkins) to be the savior,” Kingsbury said. “We're all excited to have him and what he brings, the competitor he is, and all those things, but we've got a lot we've got to get better at.”

It's a quick turnaround for the Cardinals, who host the Saints on Thursday night.

Arizona is 3-9 in its past 12 games dating to last season. The start of that stretch was about the time Hopkins began to struggle with hamstring and knee injuries. He was suspended for the first six games this season after violating the NFL's policy on performance-enhancing drugs.

Hopkins will be expected to produce right away. Kingsbury said the Cardinals can't expect miracles, but it should be a welcome addition.

“He definitely brings a dynamic that any team would want to have," Kingsbury said. "He's a true No. 1, a playmaker that defenses have to be aware of each and every snap, it makes a difference in scheme and play calling.”

Arizona's defense continues to play well. Defensive coordinator Vance Joseph has built a solid group around safeties Budda Baker and Jalen Thompson, linebackers Zaven Collins and Markus Golden, and defensive linemen J.J. Watt and Zach Allen. Many thought the unit would take a step backward after losing Chandler Jones and Jordan Hicks in free agency, but that hasn't been the case.

The offensive line had some trouble keeping Murray upright Sunday, giving up six sacks. C Rodney Hudson (knee) has been out the past couple weeks and LG Justin Pugh suffered a season-ending knee injury on Sunday. The Cardinals have been solid along the offensive line the past few seasons, but need Hudson to return and someone to step up in Pugh's absence.

Collins has taken a big leap in a his second year and is now a mainstay in the middle of Arizona's defense. He had two sacks against the Seahawks and led the team with nine tackles. At 6-foot-4 and 260 pounds, Collins has a unique blend of size and speed that allows him to help the defense in multiple ways.

It's fair to wonder if WR A.J. Green is nearing the end of his career. The seven-time Pro Bowl selection's production has dipped dramatically in his 11th season, with 10 catches for 56 yards in five games. The worst part for the Cardinals is they really could have used production from Green while Hopkins was serving his suspension.

Brown's injury is expected to keep him out of lineup for a least a month. ... The Cardinals are banged up at running back with three of the top four options — James Conner (ribs), Darrel Williams (knee) and Jonathan Ward (hamstring) — nursing injuries. ... Kingsbury was hopeful K Matt Prater (hip) will be ready for Thursday's game. ... Kingsbury said Max Garcia would likely see more playing time at left guard with Pugh out for the season.

30 — The Cardinals haven't scored 30 points in a game yet this season. They hit that mark nine times last season, resulting in eight wins.

It's a quick turnaround for the Cardinals, who host the Saints on Thursday. Arizona is 0-3 at home this season, losing to the Rams, Chiefs and Eagles.