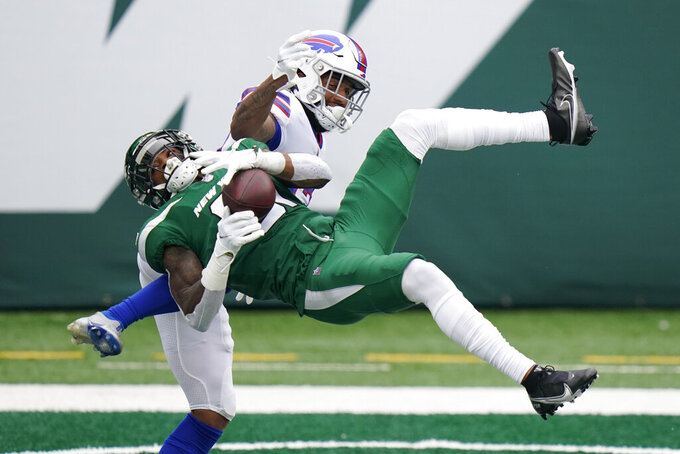 FLORHAM PARK, N.J. (AP) — Cornerback Bless Austin and tight end Trevon Wesco were activated from the injured reserve list Saturday as the winless New York Jets made nine roster moves ahead of their game at Seattle on Sunday.

Right guard Greg Van Roten and safeties Ashtyn Davis and Bennett Jackson were placed on IR after not practicing all week and being previously ruled out for the game.

Austin, who missed three games with a neck injury, is expected to slide back into his starting spot opposite Bryce Hall.

Wesco was sidelined for four games while dealing with an injured ankle.

Van Roten has a toe injury, leaving New York without its starting guards. Left guard Alex Lewis is on the non-football injury list because of a personal issue.

Davis (foot) and Jackson (hamstring) were both injured against Las Vegas last Sunday. That left the Jets thin at the secondary spot, creating an opportunity for Hampton. The former Rutgers standout played in five games last season for New Orleans.

Cager, who had two catches for 35 yards in two games earlier this season, will help offset the absence of Denzel Mims. The rookie wide receiver is out while dealing with a family issue.

Scott, who spent the last two seasons with Baltimore, is likely insurance for Jamison Crowder. The Jets' leading receiver is questionable for the game with a calf injury that kept him out of practice Friday.

Dawkins made his Jets debut against the Raiders and played on special teams.