Chargers finally get fans at SoFi, but many cheer for Dallas 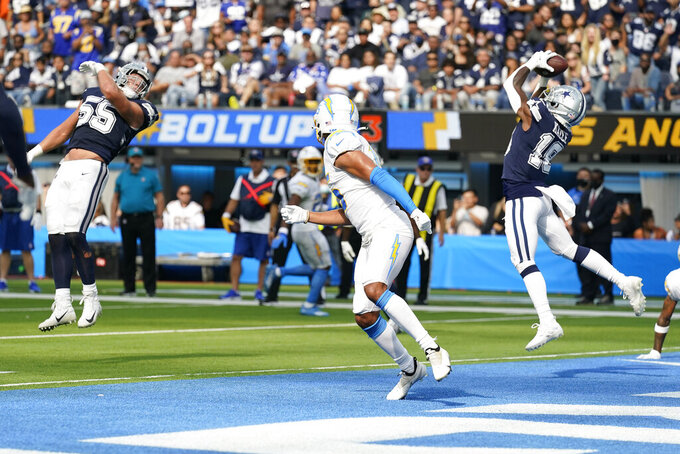 INGLEWOOD, Calif. (AP) — Four years and eight months after the Los Angeles Chargers relocated, they finally got what they sought when they moved up from San Diego to the nation's second-largest metropolis.

For the first time Sunday, the Chargers took the field in their spectacular new stadium in front of fans — a roaring, enthusiastic crowd of 70,240.

But the fulfillment of this star-crossed franchise's quest has come with a twist worthy of a “Twilight Zone” episode, or maybe a rub of a monkey's paw — if that twist was a surprise, that is.

Many seating sections were thoroughly dominated by Dallas' dark-blue and silver color scheme. One lower-bowl area seemed to have more Ezekiel Elliott jerseys than every other article of clothing combined.

“It felt a lot of ways like a home game, definitely a home game,” Cowboys coach Mike McCarthy said.

To be sure, the Chargers had tens of thousands of their own fans in Inglewood. When Los Angeles made a big play, the stadium shook with their cheers.

But when the Cowboys came through, the cheers and shakes were just as big, and probably bigger. When Greg Zuerlein nailed a 56-yard field goal at the gun to end Dallas’ 20-17 victory, SoFi was filled with ecstatic excitement.

The Cowboys are used to zealous road support — they are America’s Team, after all. They also played in the first regular-season game in SoFi history last fall, losing to the Los Angeles Rams before empty stands.

“Oh man, the exact same stadium — just a big difference with the fans,” Dallas receiver CeeDee Lamb said. “They definitely made a difference in different levels of the game. Love the fans. ... Cowboys Nation came out. Felt like a home game. We heard them even more when the Chargers had the ball.”

This has been a regular experience for the Chargers franchise for much of the past decade, and the current players and coaches realize it will continue for the foreseeable future. Their fan base in the Los Angeles area is still in an embryonic state, and teams with generational support have had a massive fan presence for the past decade at the Bolts’ home games in San Diego, Carson and now Inglewood.

Instead of lamenting their predicament, the Chargers choose to enjoy the cheers — no matter which team is receiving them.

“It was loud. It was lit,” Chargers receiver Mike Williams said. “I loved it. I look forward to the rest of the games here. It was a lot of screams for both sides.”

Although only a handful of San Diego Chargers remain on the roster, they played their final years before some truly abysmal home crowds in Mission Valley after the city soured on the Spanos family and its long-struggling team.

Moreover, a stadium packed with visiting fans is a regular reality for any franchise in a sunny climate where fans can plan a weekend vacation around their team's road schedule. Chargers season tickets are a profitable investment for savvy resellers, and Rams owner Stan Kroenke certainly isn't upset to see visiting fans pumping millions into his $5 billion construction project.

The Chargers refuse to complain about their fate, and upbeat new head coach Brandon Staley sees only positives.

“I felt like there was great energy in that crowd,” Staley said. "My focus was on the powder blue. I felt like our crowd came out, and I feel like they’re going to continue to come out because we have a good team. People in Los Angeles are going to see we have a good team. I was proud of our crowd. (Dallas) travels well traditionally, but I didn’t hear them very much. I heard our fans, and I was proud of the energy in that stadium for us.”

Although the Cowboys packed the place, the Chargers' next visitors at SoFi will have even more support.

The Las Vegas Raiders arrive for Monday Night Football in two weeks. The Silver and Black are likely still the most popular NFL team in the Los Angeles area, particularly among Generation X and early-millennial football fans, due to their successful, exciting tenure at the Coliseum from 1982-94.

No matter who's cheering, the Chargers will continue to appreciate every fan they can get.

“It’s always great to have fans back,” Los Angeles quarterback Justin Herbert said. “That’s the aspect of football that you kind of miss. And whether it’s Cowboys fans or Chargers fans, it was a good environment out there.”