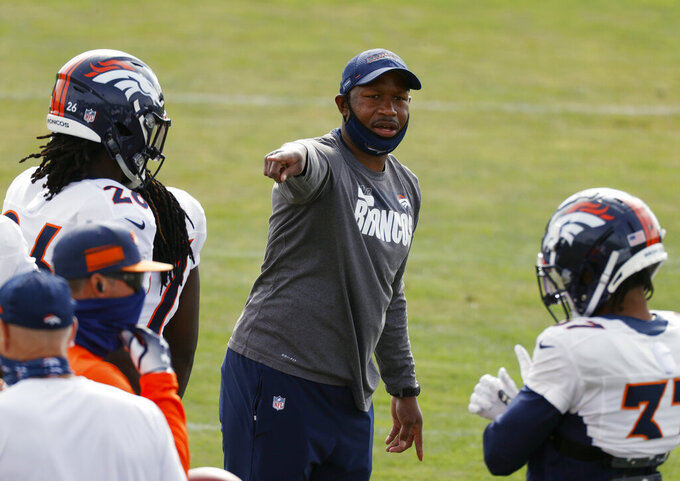 FILE - In this Friday, Aug. 28, 2020 file photo, Denver Broncos defensive backs coach Renaldo Hill takes part in drills during an NFL football practice in Englewood, Colo. Renaldo Hill is getting his first opportunity to be a defensive coordinator, but he won't be thrown into the deep end of the pool yet. Chargers head coach Brandon Staley will call the plays during games, allowing Hill to be able to progress at his own pace. (AP Photo/David Zalubowski, File)

COSTA MESA, Calif. (AP) — Renaldo Hill is getting his first opportunity to be a defensive coordinator, although he won't be thrown into the deep end of the pool just yet.

Los Angeles Chargers coach Brandon Staley will call the plays during games, allowing Hill to be able to progress at his own pace. It is a hierarchy Hill is used to. During his two seasons coaching defensive backs with the Denver Broncos, coach Vic Fangio called the plays while coordinator Ed Donatell handled things during the week.

“I definitely will lean on Staley, and be able to sit back and learn. It still gives you that that growth opportunity,” Hill said Wednesday. “I can move around and assert myself into the front seven, but also still have a footprint on the back end.”

The 42-year-old Hill has eight years of coaching experience after a 10-year playing career with the Cardinals, Raiders, Dolphins and Broncos. He joined the Dolphins staff as assistant defensive backs coach in 2018 after five years at Wyoming and Pittsburgh, before being hired by the Broncos.

Hill and Staley worked together in Denver in 2019, when Staley was coaching outside linebackers.

“We’ll definitely collaborate on those and come up with what's best for the guys, but he’s always been open to listening and receiving ideas,” Hill said. “Staley emphasizes all the time it is a collaboration of voices in the room, and everybody having their opinion in what this defense will look like. When you can listen to those other ideas, it makes everybody feel a part of what we’re doing, we’re having success.”

Hill inherits a unit that has defensive end Joey Bosa and safety Derwin James as its cornerstones, but plenty of questions. Bosa missed four games last season due to concussions and James has played in only five games the past two seasons due to foot and knee injuries.

After four years of running a 4-3 scheme under Gus Bradley, the Chargers will go back to a 3-4 defense. Los Angeles was ranked 10th in total defense this past season, but had six games in which it squandered double-digit leads. The Chargers were also 25th in sacks and tied for 22nd in takeaways.

Hill said he is looking for the defense to have a more consistent pass rush and to better pressure the quarterback. The Chargers were last in blitzing, averaging 6.1 per game while the league average is 11.7.

Ansley, who is likely to coach defensive backs, was the defensive coordinator at the University of Tennessee the past two seasons. Barry has been the assistant head coach/linebackers the past four seasons with the Rams but did coach linebackers for the Chargers from 2012-14. Donatell has been a defensive quality control coach for the Seahawks since 2017.