Colts' adaptability could be key attribute for playoff run 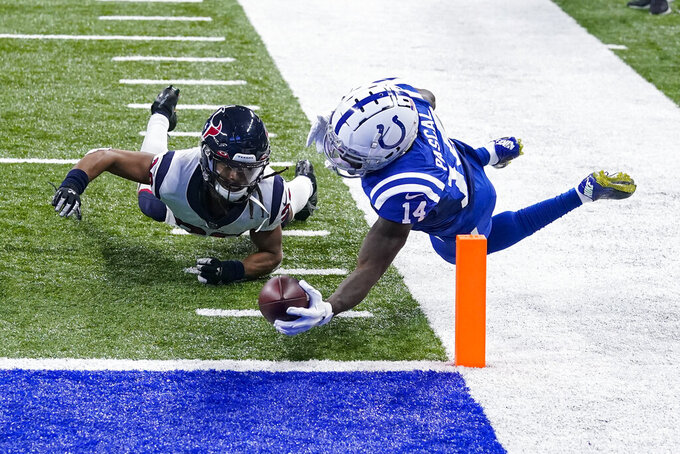 Coach Frank Reich and his players believe their ability to adapt to the ever-evolving circumstances this coronavirus-impacted season is a key reason they’re on the cusp of reaching the playoffs — and capable of making a deep postseason run.

“That’s why I always remind the guys to stay calm because it (a big play) is coming," defensive tackle DeForest Buckner said after a 27-20 victory over Houston. “We always preach on the sideline it’s three-and-out or a takeaway and I always have the confidence in my guys to get the job done.”

Buckner certainly did his part Sunday for the Colts (10-4), making three sacks and forcing one fumble despite playing on a gimpy ankle that limited him to playing 51% of the snaps.

Rookie kicker Rodrigo Blankenship hit the net on a season-long 53-yard field goal early in the fourth quarter to give Indy a 20-13 lead.

Philip Rivers took advantage of a coverage mismatch with a 41-yard pass to a wide-open T.Y. Hilton. That play set up a the tiebreaking 5-yard TD pass to Zach Pascal, his second score of the day.

Then linebacker Darius Leonard delivered the knockout punch when he jarred the ball loose from Keke Coutee at the 2-yard line. Bobby Okereke recovered it in the end zone with 19 seconds left to seal the win.

And while fans cheered those players and plays, the bigger postgame celebration was reserved for a different kind of victory: getting punter Rigoberto Sanchez back less than three weeks after he had a cancerous tumor removed.

“That was awesome,” said Jonathan Taylor, who rushed for 83 yards and one TD. “You saw everyone giving all the defense handshakes coming out and as Rigo was getting introduced, everyone was like ‘Come on, he’s here.’”

Reich has been working to instill this attitude for three seasons. Now that it has taken root, the Colts believe anything is possible as they try to clinch their second playoff appearance in six years.

“What I’m most excited about is in the fourth quarter of that game, when the game is on the line, we made plays in all three phases,” Reich said. “That’s what playing December football — that’s meaningful. That’s what it takes to continue to build the DNA and who we are and where we believe we are going.”

Rivers. When the 17-year veteran changed teams in March, the critics thought Indy made a mistake. Instead, the 39-year-old quarterback has improved steadily. He’s thrown 17 TD passes and four interceptions in the last nine games, has five straight multi-TD games, and no interceptions in December.

Closing out games. While the Colts beat Houston twice in three weeks, they needed late turnovers inside the 5-yard line to seal both wins. Indy should have put away Sunday’s game early after taking a 14-0 lead. The Colts also needed an overtime turnover to beat Green Bay, a game they could have won in regulation.

Sanchez. He was welcomed back with open arms by his teammates and coaches and the crowd of roughly 10,000 roared when he was introduced.

“He could have made a ton of excuses of why he couldn’t have been there, but he was there,” Taylor said. “He fought back and the fact that he came back so quickly, it just shows that his toughness is on another level.”

RB Jordan Wilkins. Reich changes the backfield workload almost weekly. This time, it was Wilkins who saw his touches reduced. He logged just nine plays against the Texans, all on special teams.

Receiver Marcus Johnson left the game early with an injured quad and did not return. Reich said Monday that he had no update yet on Johnson.

7 1/2 — Buckner, Denico Autry and 2014 NFL sacks champ Justin Houston all have 7 1/2 sacks this season. Only Indy and Pittsburgh have three players with that many sacks.

The Colts are in solid playoff position. If they win both of their remaining games, at Pittsburgh and home against Jacksonville, they're in. And if they can snap a six-game losing streak against the Steelers, they could win their first AFC South title since 2014.