Colts welcome Wentz with open arms as workouts wind down 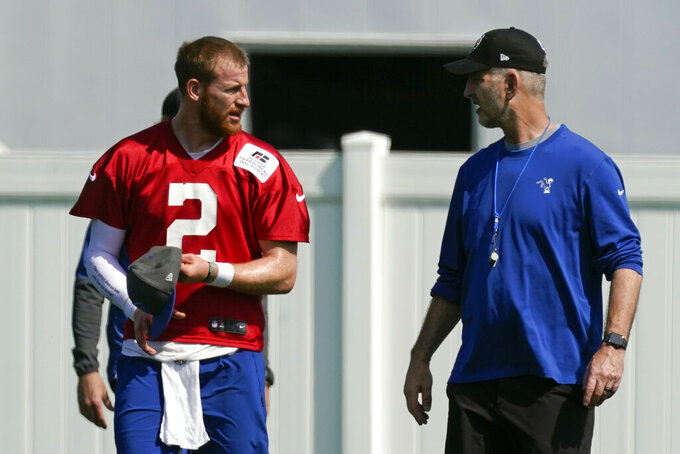 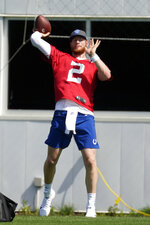 INDIANAPOLIS (AP) — Carson Wentz spent the past two weeks working out in a whole new world.

The quarterback found his way around the Indianapolis Colts complex, talked football with a different set of coaches, got acclimated to calling plays in a new huddle and started relearning coach Frank Reich's offense.

And, perhaps the most important thing for Indy's new quarterback, was bonding with his teammates.

“I think getting to know guys is a big part of camaraderie and chemistry in the locker room and not just how you’re doing but getting to know their family, their life, their faith so we can really trust each other," Wentz said Wednesday. “Everyone’s been awesome, super welcoming. Even after two weeks, I feel a little bit at home."

The eighth and final day of Indy's voluntary workouts is held Thursday. Players then will have eight weeks off before reporting to training camp, presumably in Westfield, just a short drive from team headquarters.

Already, though, Wentz appears to be trying to change the public perception that emerged following a forgettable final season in Philadelphia.

The No. 2 overall pick in the 2016 draft and one-time MVP front-runner fell out of favor last year when he took 50 sacks, threw a career-high 15 interceptions and was benched for the final four games. Reports later surfaced that presented Wentz as so disgruntled he wanted a trade and that he was disliked in the locker room.

Some critics even described Wentz as broken.

He convinced Colts general manager Chris Ballard to send two draft picks to Philadelphia for the former North Dakota State star in February. Since the deal became official in March, Wentz has been a model citizen.

“Carson's done an excellent job both vocally and the way he works," Reich said. “He’s not a shy guy. He's very outspoken. But he came in with good command of the offense and the level of command he has in the huddle, I know guys feel that. Physically, you can just feel his presence on the field. He’s a dominant physical specimen for the position and you can just feel that out there."

Players don't just sense it, they see it in the little things Wentz has done.

Running back Nyheim Hines told reporters he was as impressed with Wentz's strong arm as he was with Wentz's question about his twin sister, Nyah.

Wentz also attended a player-wife get-together at the home of starting center Ryan Kelly, who is working with his fourth different starting quarterback in four years and called Wentz an “awesome" guy.

He's been equally diligent on the field.

Wentz held individual throwing sessions with receivers such as four-time Pro Bowler T.Y. Hilton and Michael Pittman Jr., Indy's top draft pick in 2020, before the workouts began last week. More are on the schedule for June and likely July, leading into training camp.

“It was the first or second time I had thrown with him and we were running post routes and he threw like a 65-yard post route. I said, ‘Oh my goodness, I’ve got to dig down and run for that one,'" said Pittman, who declined to give up his No. 11 jersey to Wentz.

“It’s like ‘Oh my, he’s on a mission.' I think that’s a question for him, but I could tell whatever it is — proving himself, winning a Super Bowl or whatever — he's just laser-focused."

Reich expected nothing less from Wentz, who will wear No. 2 this season.

But there are still some changes Wentz must negotiate.

First, he must master the new terminology of Reich's offense. Then he'll have to adapt to Reich's preferred style — run first, get the ball out fast and on time to avoid pressure and spread the ball around.

If he does, Wentz will have an opportunity to resuscitate his career and perhaps make a long playoff run with all the new playmakers around him.

“There’s just a lot of talent here," Wentz said. “I see it watching the film from last year, how they spread the ball around and get everyone involved and that excites me. I’m going to throw the ball where it’s supposed to go on each play and not just to one guy. That excites me because everyone has a different skillset and everyone’s talented."