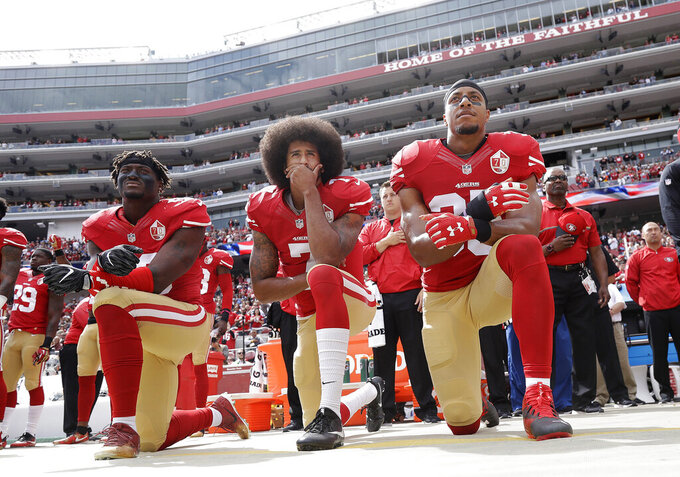 FILE - In this Oct. 2, 2016, file photo, from left, San Francisco 49ers outside linebacker Eli Harold, quarterback Colin Kaepernick and safety Eric Reid kneel during the national anthem before an NFL football game against the Dallas Cowboys in Santa Clara, Calif. There's an exhibit at the High Museum in Atlanta, not far from the Super Bowl stadium, dedicated to Tommie Smith and his courageous stand for social justice at the 1968 Olympics. Talk about symmetry. Smith raised a fist, Colin Kaepernick took a knee, and both paid an enormous price for doing the right thing. (AP Photo/Marcio Jose Sanchez, File) 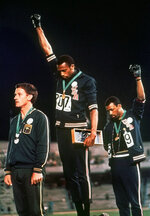 ATLANTA (AP) — "Tommie Smith's gesture continues to resonate. It has inspired similar gestures by men and women for whom Smith's iconic image is a symbol of courage and unity in the face of bigotry and injustice — most prominently, former NFL quarterback Colin Kaepernick, who refused to stand before football games during the U.S. national anthem to protest racial injustice in this country."

— From the exhibit "With Drawn Arms" at the High Museum of Art in Atlanta.

Just a few miles from the stadium where the Super Bowl will be played on Sunday, there's a special display of drawings, paintings and sculptures honoring the legacy of Tommie Smith, that black-gloved warrior for social justice at the 1968 Mexico City Olympics.

As the NFL is wraps up its second full year of blackballing quarterback Colin Kaepernick, it just felt right to visit the High Museum on a brisk Thursday morning to be reminded that Smith and John Carlos, both of whom raised their fists on the Olympic medal podium, endured immense scorn and isolation for their brave gesture.

Of course, the Smith exhibit is not on the extensive list of Super Bowl-related parties, concerts and shilling that have swallowed up large swaths of Atlanta.

The parallels between Smith and Kaepernick are impossible to ignore.

Both were punished. Both were called unpatriotic. Both were dismissed as angry black men who should just play the game and shut up.

Their gestures were peaceful yet powerful.

The fist and the knee.

But, even though history has largely rehabilitated Smith and Carlos for the courageous stand they took more than five decades ago, the NFL insists of making sure that Kaepernick never again sets foot on the playing field.

"I don't think Kaep is going to be signed," said Carolina Panthers receiver Torrey Smith. "If they didn't do it yet, they're not going to do it now. They just want to let this stuff blow over and let their business keep on going without him."

While Kaepernick is sure to win the war, that won't be apparent for years or even decades. The immediate battle — his playing career — is most likely over.

For this, the NFL should carry an everlasting stain.

Back in 1968, International Olympic Committee chief Avery Brundage angrily expelled the Olympic protesters from his games, sending them home to face shunning, abuse and even death threats.

At least Brundage — by all accounts, a generally horrible human being — didn't attempt to sugarcoat his actions. He didn't like what Tommie Smith and Carlos had done, so he punished them with all his might.

We can't say the same for NFL Commissioner Roger Goodell , who continues to stand by the ludicrous notion that Kaepernick's lack of offers is a football decision , reached independently by all 32 teams.

"I've said it many times, privately and publicly, that our clubs are the ones that make decisions on players that they want to have on their roster," Goodell said. "They make that individually. They make that in the best interests of their team. ... Individual clubs make decisions that maybe another club won't do. And they all want to win."

Someone brought up the subject in a different manner, basically asking if Goodell was concerned that the NFL would wind up on the wrong side of history.

(Spoiler alert: It will.)

"If a team decides that Colin Kaepernick or any other player can help their team win, that's what they'll do," Goodell said, sticking to his guns even though his nose was surely growing longer with every word.

But this is the low ground the NFL has chosen to take, and it looks like the league will prevail in ending Kaepernick's career.

"I think everybody understands and realizes what that whole situation is," said retired receiver Anquon Boldin. "Anybody with a decent head on their shoulders would know that he deserves to be in the NFL. He's one of the best 64 quarterbacks in the U.S. For him to not have a job the past couple of years has been a travesty."

The NFL has done a devious, highly effective job of keeping its remaining players in line, essentially buying off their support by aligning with The Players Coalition — a group of current and ex-players that is doing some good work addressing the social issues that Kaepernick drew attention to, such as police brutality and criminal justice reform.

The group split with Kaepernick and his closest ally, safety Eric Reid, and seems to have given up on the idea of getting the quarterback back in the league.

"I don't think there's anything we can do," said Torrey Smith, a leader of The Players Coalition along with Boldin. "You can't force an owner to hire him. All you can do is vouch for him. I vouched for Eric Reid (who did return to the league this past season). And I vouched for Kap."

The group handed out $2 million in grants to six worthy groups during a ceremony Wednesday, an event held right in the Super Bowl media center and publicized by the league's mammoth PR machine.

Not surprisingly, there has been no mention of the Tommie Smith exhibit a few miles away.

The exhibit runs through Sunday.