Column: Footy, anyone? Niche fans cheer on sports from afar 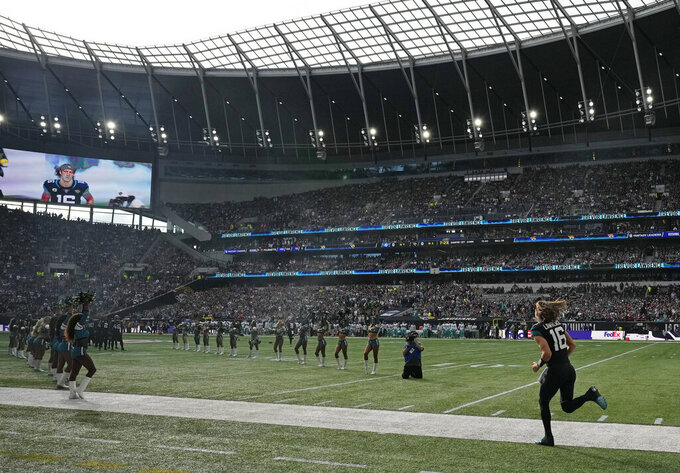 FILE - Jacksonville Jaguars quarterback Trevor Lawrence (16) runs onto the field for an NFL football game between the Miami Dolphins and the Jaguars at the Tottenham Hotspur stadium in London on Oct. 17, 2021. Folks in soccer-mad Britain have a growing hankering for the U.S. brand of football, brought to their world with a big push from the NFL and an increasingly diverse media landscape. “It's a good sport. It's got violence. It's got scoring,” said Joe Vincent, a Welshman who set up the Jacksonville Jaguars fan club in Britain. “Once you've gone to a game, you're hooked.” (AP Photo/Matt Dunham, File)

Early Saturday morning, at half past midnight, a small but passionate group of fans will gather in front of our American TVs to watch the Grand Final, the Super Bowl of Aussie rules football.

Something unites those of us — insomnia, perhaps? — who choose to adopt a sport from the other side of the globe, one that's way beyond the comfort zone of our upbringing.

But niche fans cheer on all sorts of sports from afar, a comforting reminder of just how much the world is shrinking.

“I started watching and really love it,” said T.J. Sherwood, a 19-year-old college student in Tennessee who also happens to be a footy fan.

Sort of like the folks in soccer-mad Britain, who have a growing hankering for the U.S. brand of football, brought to their side of the Atlantic with a big push from the NFL and an increasingly diverse media landscape.

“It's a good sport. It's got violence. It's got scoring,” said Joe Vincent, a Welshman who set up the Jacksonville Jaguars fan club in Britain. “Once you've gone to a game, you're hooked.”

Vincent, a lifelong soccer and rugby fan like so many in Britain, was first exposed to the NFL from playing the Madden video game in 1996. He decided to pick a favorite team.

“I was new to the sport, so I thought it was best to follow one of the new teams,” he recalled. “Carolina and Jacksonville had just started (the year before), so I picked Jacksonville.”

Well, that didn't work out so well.

That's OK, though. The Jaguars now consider London a second home, launching a deal in 2013 that has brought them to Britain for a game every season except the pandemic-marred 2020 campaign.

Jacksonville will return to Wembley Stadium on Oct. 30 to face the Broncos in one of three games set for London. Another will be held in Munich, yet another in Mexico City.

Vincent has been to every Jags contest in London, passing on his fandom to son Evan. Last year the youngster collected a game ball after Jacksonville upset the Dolphins to end a 20-game losing streak, the highlight of Urban Meyer's dumpster fire of a tenure as coach.

“My son was a newborn when the Jaguars played their first game in London,” Vincent said. “Now he's 9 years old, and he's absolutely crazy about the NFL. There's going to be a new generation of fans just from dads taking their kids to the games."

Australian rules football has a much smaller grip on the American sporting public, but more than 30 cities are set to host viewing parties for Saturday's Grand Final, which begins at 12:35 a.m. on the U.S. East Coast because of a 14-hour time difference.

One of those will be in Rome — Georgia, that is, about an hour's drive northwest of Atlanta. The local footy team, the Redbacks, will be setting up at the Cosmic Dog Outpost to watch the Geelong Cats take on the Sydney Swans.

When someone asks Redbacks player Aaron Nobles to explain Aussie rules football, he usually gives this response: “If you combine rugby and soccer and basketball and volleyball, and put it on a cricket oval, that's what you've got.”

Nobles will be watching the Grand Final, even though it won't end until after 3 a.m. and he's got to be at work at 10 in the morning.

The time difference works much better for NFL fans on the other side of the pond.

The 1 o'clock NFL games on the East Coast begin at 6 p.m. in Britain.

“The Premier League is finishing up at 6 in the evening, so you can flick over to the NFL and you've got the rest of the evening covered,” Vincent said.

Sherwood, a student at Cleveland State Community College, became a fan of the AFL about four years ago. This past weekend, he played his very first game after joining a fledgling squad in Chattanooga.

Not one to follow the crowd, Sherwood has little interest in the popular American games, which he calls “start-and-stop sports.” He prefers rugby and Aussie rules football.

My first exposure to Australian footy came in the 1980s during the early days of ESPN, which looked Down Under in its desperate quest for programming.

It seemed so strange, this non-stop game played on an oval field (actually, it's a cricket pitch) with rough-and-tumble players who weren't wearing helmets or a lick of padding. Of particular amusement to American fans were the umpires, decked out in white jackets and broad-brimmed hats, who signaled for goals (worth six points) and behinds (a single point).

My reunion with footy came during the 2007 world aquatics championships after an hour-long train ride from Melbourne, Australia, to interview American swimmers training in Geelong, a low-key city of roughly a quarter-million along the Victorian coast.

As luck would have it, the pool was at Kardinia Park, also site of the stadium that is home to the Cats. The team happened to be playing what we in the U.S. call a preseason game. When work was done, there was still time to catch the match.

The game was thrilling, even with only a scant notion of what was actually happening. Thankfully, there were plenty of gracious fans willing to provide a rudimentary lesson or two. And when the final horn sounded, the loudspeaker blared the Cats' hokey but endearing theme song, “We Are Geelong (the greatest team of all).”

Back in the States, I followed the Cats religiously that season as they stunningly romped to their first Australian Football League premiership since 1963, the year I was born.

Geelong has remained a powerhouse club, earning a trip to the finals (known in the U.S. as the playoffs) for 15 of the last 16 seasons, though they haven't won it all since 2011.

On Saturday, before some 100,000 at the hallowed Melbourne Cricket Ground, they'll try to snap their title drought against the Swans.

I'll be watching in America.

I won't be alone.