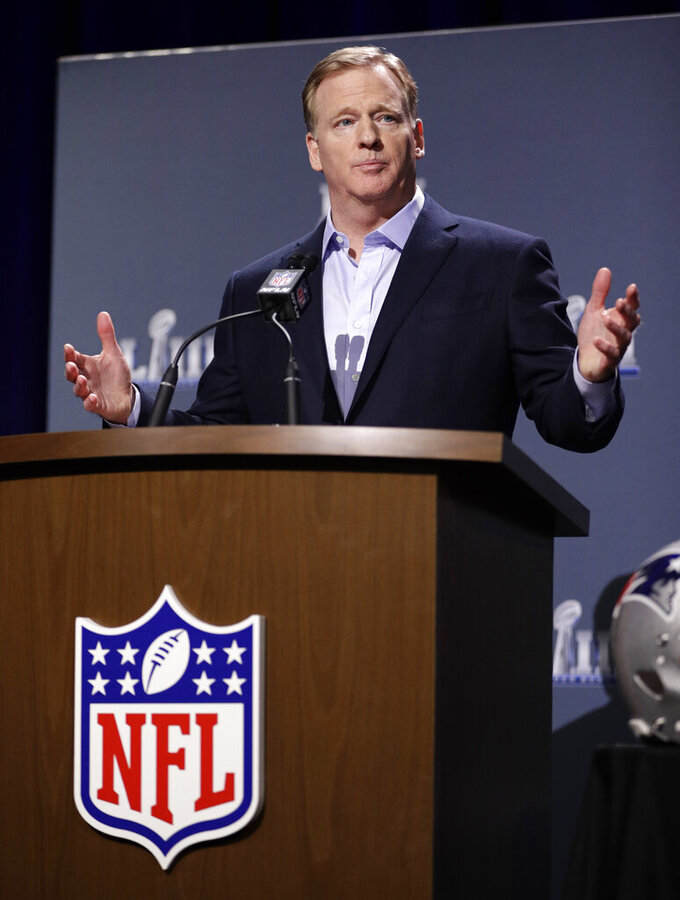 ATLANTA (AP) — This much we know after Roger Goodell's annual State of the NFL gabfest leading up to the Super Bowl.

The league has never been stronger. The commissioner is a fan of the game. And there was a missed call in the NFC championship game.

But Goodell doesn't want to use his immense power to improve the NFL by changing officiating rules, getting Colin Kaepernick back into the league, figuring out where the Raiders should play next season or even to make sure stadium food is cheaper. And no, he never considered ordering a replay of the moments after the missed call in the Rams-Saints game.

Our apologies, Who Dat Nation.

It was all so slick, of course, watching Goodell turn Wednesday's news conference into a display of bobbing and weaving, ducking and parrying — all while making sure not to take a stand on much of anything, certainly not while standing in front of a massive ballroom packed with hundreds of media from around the globe.

He downplayed his role in almost every issue facing the NFL, from Kaepernick to officiating to halftime entertainment, kicking the can to team owners, league committees or Maroon 5 .

Officiating was on everyone's mind, a huge stain on the league after the debacle that occurred in the NFC championship. But Goodell wouldn't be lured into giving details on possible solutions, whether it be increased use of replay (the most obvious way to address the problem) or a suggestion that the league add an eighth official.

Instead, we got the smooth-as-silk Goodell offering up an order of non-commitment, covered with a heaping helping of covering all the bases.

"As it relates to what I think my role is, it's to make sure that the Competition Committee understands that this is critical for us to analyze, to evaluate and try to see if there's a better solution than what we have today," Goodell said.

We certainly hope there's a better solution than what we saw a couple of Sundays ago, when the officials didn't bother to call an egregious pass interference penalty (nor a personal foul for a clear helmet-to-helmet hit) that would've likely sent the New Orleans Saints to the Super Bowl.

Instead, the Los Angeles Rams were left with enough time to drive for a tying field goal and win the game in overtime, sending them on to Atlanta to face the New England Patriots.

Goodell acknowledged that the call was blown, but came up far short of offering the aggrieved fans in the Big Easy any sort of satisfaction.

"We understand the frustration that they feel right now," the commish said. "We certainly want to address that."

Then, he proceeded not to address much of anything.

But when the officials get one so wrong, it's up to those in charge — starting with the guy at the top — to take a strong, forceful, unequivocal stand that restores a bit of confidence.

Goodell did none of that.

"The game is not officiated by robots. It's not going to be," Goodell said. "We will look again at instant replay. There have been a variety of proposals over, frankly, the last 15 or 20 years. Should replay be expanded? It does not cover judgment calls. This was a judgment call. The other complication is that it was a no-call. Our coaches and clubs have been very resistant, and there has not been support to date about having a replay officials or somebody in New York throw a flag when there's no flag."

Just when it sounded like Goodell was taking a position, he quickly put that notion to rest.

"They have not voted for that in the past. It doesn't mean that we won't," said Goodell, ducking off the ropes and finding plenty of space in the middle of the ring.

Goodell took the same tack on any other issue of substance.

He shrugged off a significant dip in the reduction of minority head coaches , not to mention the dearth of minorities who serve as offensive coordinator and quarterback coaches — the spots on the staff that most often provide a conduit to the top job. "We don't look at one-year increments," he said.

Just as troubling, he treated Kaepernick's continued blackballing (now at two years and counting) as nothing more than a personnel matter, insisting that all 32 teams decided, completely independent of each other, that a quarterback who led the 49ers to a Super Bowl is no longer qualified to play.

Naturally, it has nothing to do with the national anthem protests that Kaepernick led in a bid to address racial and social injustice, a stand that won't be a judgment call at all when history is written. Kaepernick was right. Goodell and NFL were wrong.

A child journalist asked him if it was tough to be commissioner and a fan of the game.

"What a good question!" Goodell exclaimed.

Actually, there were plenty of good questions.

Just not a lot of answers.