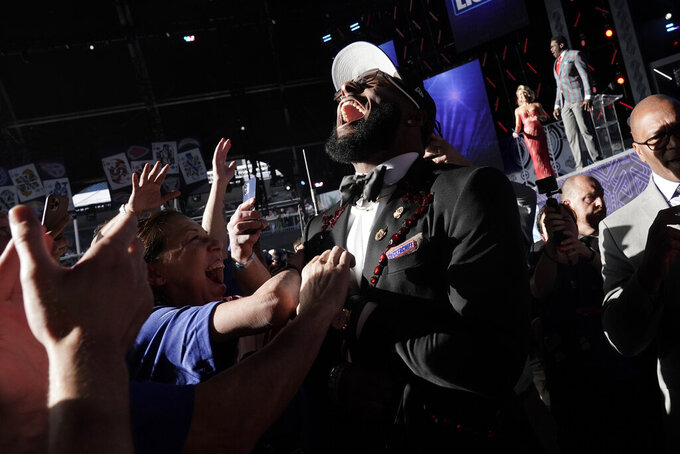 LAS VEGAS (AP) — The NFL draft served up some special Sauce to go along with Roger Goodell’s usual array of hugs.

On the first day of the draft, Las Vegas stepped up to provide the sizzle.

In a scene that would have been unimaginable just a few years ago, the city delivered just when needed most. If a draft top loaded with defensive players and offensive linemen wasn’t exactly must-see TV, the stunning backdrops on the Las Vegas Strip surely were.

And who will ever forget Goodell introducing Ice Cube to kick off the whole show.

“Everybody, Ice Cube,” the commissioner proclaimed. “Come on, baby!”

No, the NFL draft wasn’t in Cleveland anymore. Not with 100,000 people partying beneath a giant observation wheel on the Las Vegas Strip, and players walking the floating red carpet in between Cirque du Soleil performers spinning around at the Bellagio fountains.

Not with one giant party going on outside and who knows how many more in the nightclubs and showrooms of the glittering hotels that line the iconic Strip.

It was almost enough to make everyone forget there were no star quarterbacks anywhere near the stage under the High Roller wheel. It wasn’t until the Pittsburgh Steelers used pick No. 20 to take a hometown player in Kenny Pickett that a quarterback’s name was even mentioned.

That was the longest wait for a quarterback pick since Jim Druckenmiller was taken 26th in the 1997 draft. Steelers fans can only hope Pickett fares better than Druckenmiller, who threw only 51 passes in his two-year career with the San Francisco 49ers.

The paucity of quarterback picks — Pickett was the only one chosen in the first round — dulled the draft, if only because of the position’s outsized importance in today’s NFL. The Los Angeles Rams won the Super Bowl largely because they were able to snag a top quarterback last year — by trade, not draft — and any team turnaround usually begins beneath center.

But while there were no quarterbacks to be found among the early picks, there were some potential stars. That includes Ahmad Gardner, the cornerback known as Sauce who was picked by the New York Jets at No. 4, and immediately started a buzz online with a jeweled sauce jug around his neck and a potential Big Apple Sauce nickname.

Kayvon Thibodeaux got the rest of New York buzzing with his outsized personality when he was picked next by the Giants. The defensive end from Oregon celebrated exuberantly with Make-A-Wish recipient Sam Prince, who was brought on stage to announce the pick, in perhaps the most touching moment of the night.

Thibodeaux then served notice when asked about his college career that he will be a fixture on the New York City tabloid sports pages for years to come.

“When you bring up college football, I just think about playing for free,” Thibodeaux said. “I don’t miss that.”

Thibodeaux and the other first rounders won’t have that to worry about anymore. He’ll get a $19.9 million signing bonus as part of a four-year $31.3 million deal that comes with being the No. 5 pick. Even those called late in the first round will get at least $5 million guaranteed, one reason there were a lot of happy faces and hugs from family members in the green room as the picks were announced.

While quarterbacks were in short supply, the guys who chase them were on center stage. That included edge rushers Travon Walker of national champion Georgia and Aidan Hutchinson of Michigan who went to Jacksonville and Detroit as the Nos. 1 and 2 picks.

For the first time in 31 years, though, no offensive players were among the top 5 picks.

That didn’t matter much to fans who came dressed in their team’s finest from around the country to celebrate all things NFL. The draft has been a traveling road show since leaving New York for Chicago in 2015, but no city hosts a party like Las Vegas does and it seemed everybody was in a party mood no matter who their team picked.

The party went on long after the last picks were made. It continues through Saturday with the full muscle of the NFL and Las Vegas combining to make sure even the most casual fans are paying attention.

Maybe by then there will even be a few quarterbacks picked.