Column: Will draft make your team better? Don't bet on it. 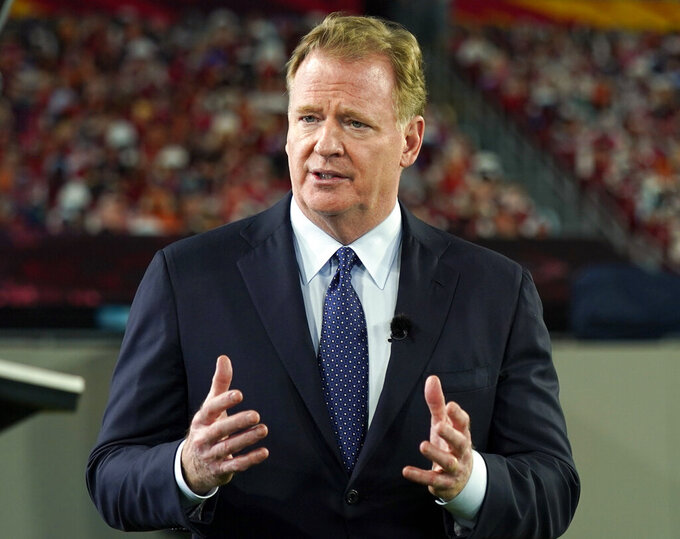 The NFL has embraced sports betting so fully that you almost expect Roger Goodell to open the draft by placing an over/under bet on the number of cornerbacks drafted by the, yes, Las Vegas Raiders.

Luckily, the commissioner is paid so handsomely he doesn’t need his ticket to cash. If betting a typical NFL game is hard — and it is — imagine trying to make a few bucks off a draft that experts have spent every waking hour analyzing for the last few months.

The top three picks seem so set that even Goodell couldn’t make a dime off of them. But even the people who set odds on everything are having trouble figuring out exactly where things go from there.

And, no, for those wondering, there’s no line on whether Goodell will reimagine his draft day sweater from last year, when COVID-19 forced him to run things from his socially distanced basement.

One thing the bookies in Las Vegas do know: Little that happens over three days this week will have much effect on how many games your favorite team wins this season.

``The draft really doesn’t affect the futures market too much,’’ said Nick Bogdanovich, who sets odds for the big William Hill betting chain. ``Quick changes can happen with teams, but there are so many stars that have to align for that to happen.’’

Count Bogdanovich among those who don’t expect that happening. William Hill and several other major sports books have already set win total lines for the upcoming season in advance of both the draft and the actual schedule being released by the NFL.

The NFL has always been about parity and even in an expanded 17-game season that figures to hold true. William Hill lists total wins between 4.5 (Houston) and 12 (Kansas City) with the rest of the teams slotted somewhere in between.

Among those teams is Jacksonville, which has a new coach in Urban Meyer and will soon have a new quarterback in Trevor Lawrence. The Jaguars are the rare team that bookies figure will make a big move, though they have nowhere to go but up after winning one game last season.

Don’t expect to steal some money on the Jags, though. The bookies are way too smart for that, figuring Jacksonville will take a small step toward respectability by winning six games this season.

You can bet on that, just as you can pick the Chiefs to win more than a dozen games in the longer season. And why bet on which long shot the Steelers take in the draft when you can wager on them to win less than their over/under of nine games behind aging quarterback Ben Roethlisberger?

With Lawrence seemingly a lock to go No. 1 and Zach Wilson No. 2 to the Jets, don’t even think of trying to find a reasonable wager at the top of the class. The sports books that even bother to offer bets on the top two picks have them so lopsided that someone betting $500 on Lawrence going No. 1 would only win $5.

“It’s a little like knowing the score of the game before the game starts,’’ said Jimmy Vaccaro of the South Point Hotel sports book. ``If they didn’t draft the Clemson kid first that would be insane.’’

Actually, the definition of insanity might be taking the rent money and trying to outsmart both the bookies and the wise guys in betting the draft. Still, there are enough props available that the new wave of sports bettors will find hard to resist.

Betting on the draft is a relatively new phenomenon, as is being allowed to bet legally somewhere other than Las Vegas. But limits are generally low, and there’s not a ton of action, with the handle probably not even matching a Thursday night game during the season.

Unlike a game, though, it’s a nightmare for oddsmakers to handicap.

``We are accepting wagers on something where you could already have a good idea of what is going to take place,’’ said Jay Kornegay of the Westgate Superbook. ``Therefore, as a bookmaker you have to be very well versed on the draft landscape. The information is out there and what we found over the last couple of years is that the information has been pretty accurate.’’

Still, it’s a chance to wager on football. And with the NFL by far the most popular betting sport in the country, there will be bettors stepping up to take that chance.

That's true even if they can't find 2-1 odds against Goodell bringing back the sweater for an encore performance.

___ Tim Dahlberg is a national sports columnist for The Associated Press. Write to him at tdahlberg@ap.org or http:twitter.com/timdahlberg