Cowboys will have 4th starting QB of season against Steelers 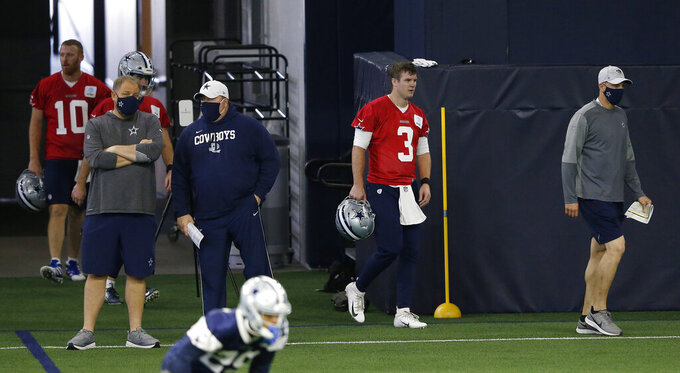 FRISCO, Texas (AP) — Dallas receiver CeeDee Lamb stammered briefly when asked about his first practice with Cooper Rush and Garrett Gilbert as those two quarterbacks compete to start against Pittsburgh.

And that's the guy who at least has a little history with the Cowboys.

Dallas will have its fourth different starting quarterback of the season against the undefeated Steelers (7-0) on Sunday with Andy Dalton unavailable because of COVID-19 protocols.

Coach Mike McCarthy said Wednesday he was benching rookie Ben DiNucci in favor of either Gilbert or Rush, who running back Ezekiel Elliott said shared the reps in the first practice.

DiNucci looked overmatched in his first start at Philadelphia last weekend, a 23-9 win by the Eagles. The Cowboys (2-6) rarely threw down the field, and DiNucci lost two fumbles.

“The decision was made to go with the two experienced quarterbacks,” McCarthy said. “I just felt with the opponent that we’re playing, we need some more experience at that position.”

Dallas last had four different starting quarterbacks in the same season five years ago, when Tony Romo broke his collarbone twice and the Cowboys finished 4-12.

Brandon Weeden, midseason pickup Matt Cassel and Kellen Moore, now the Dallas offensive coordinator, were the others. It happened one other time in franchise history — 2001, when the Cowboys finished 5-11.

The Cowboys have lost all three games Prescott missed, and haven't scored a touchdown the past two. Dallas had the NFL's No. 1 offense before Prescott's injury. The Cowboys have dropped from first to 24th in points per game in just three weeks.

“Whoever goes out there and plays for us Sunday, we’re going to rally behind them and rally with them and go try to win a football game,” Elliott said.

The Cowboys had to start DiNucci, a seventh-round pick, because Dalton sustained a concussion the previous week in Washington. It was Dalton's second start in place of star Dak Prescott, who is out for the season with a broken ankle.

McCarthy said the club is hopeful Dalton will come off the COVID-19 list late next week, when Dallas has its bye. If so, Dalton would be in line to start at Minnesota on Nov. 22.

While Gilbert and Rush have fewer combined career passing attempts (nine) than DiNucci's 43 from the past two games, both have been in the league significantly longer.

Gilbert, the former Texas starter who finished his college career at SMU, was a sixth-round pick by the Rams in 2014 and has bounced around the NFL since. The Cowboys signed him off Cleveland's practice squad after Prescott's injury in Week 5.

Rush was Prescott's backup for three seasons but rarely saw the field. The Cowboys waived him after signing Dalton to a one-year contract to be Prescott's backup. Dalton started for nine years in Cincinnati before the Bengals drafted Joe Burrow No. 1 overall and turned the 33-year-old loose.

After Dalton was injured, the Cowboys added Rush to the practice squad. The Giants claimed Rush off waivers in May, but released him from their practice squad in December.

“It would be nice to come to a decision by Saturday’s practice,” McCarthy said. “I think it would be important for one guy to take the majority of those reps. It’s obviously something we’ll be talking about throughout the week.”

NOTES: Punter Chris Jones had surgery for a core muscle injury and was expected to miss several weeks. Hunter Niswander was signed to the practice squad last week and will take Jones' spot. The 31-year-old Jones has started every game since 2013. ... Elliott was listed as limited in practice with a hamstring injury. The fifth-year back hasn't missed a game because of injury for the Cowboys.

By John Glennon 60 minutes ago
an hour ago
By Dan Scifo 2 hrs ago
By Josh Dubow 8 hrs ago
By Dennis Waszak Jr. 9 hrs ago