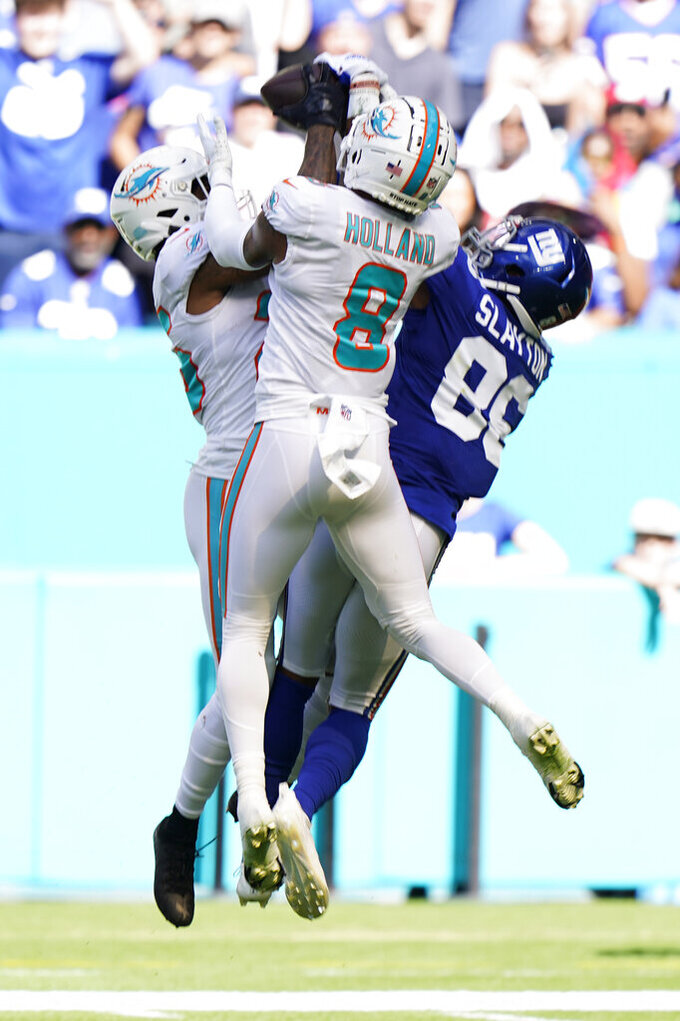 MIAMI GARDENS, Fla. (AP) — The Miami Dolphins now have four players on the NFL's COVID-19 reserve list after adding safety Jevon Holland and running back Phillip Lindsay there on Monday.

Those moves come after running backs Myles Gaskin and Salvon Ahmed were put on the list last week. The addition of Lindsay meant all three running backs on the Dolphins' 53-man roster were on the list, obviously not a great development heading into a week of practice for Sunday's game against the New York Jets.

In response to the positive tests, Miami elevated running back Duke Johnson to the active roster as a COVID-19 replacement on Monday from the practice squad. The team also worked out some running backs Monday.

Fully vaccinated players have a chance of testing out and getting cleared faster than unvaccinated players, so there is a chance that any or all of the Dolphins' players on the list may be ready to go by Sunday.

The Dolphins, who returned to work Monday following a few days off for their bye week, all were tested on their first day back.

“We just follow the protocols as we normally do ... but I also don’t have a crystal ball here," Dolphins coach Brian Flores said when asked if he had concerns of wider spread among the team. “With everyone coming off of the bye week and kind of getting away, part of our discussion was being safe and understanding that there is still a pandemic out here. We’ll follow the protocols and practice the guys who are here.”

Holland has played in all 13 games, starting 10, in his rookie season for Miami. He has 50 tackles, two sacks, two interceptions, nine passes defensed and three fumble recoveries.

Gaskin is the Dolphins' leading rusher this season, with 526 yards. Lindsay and Ahmed are second and third with 172 and 149 yards, respectively. Johnson has appeared in one game for Miami this season, with four carries for 18 yards.