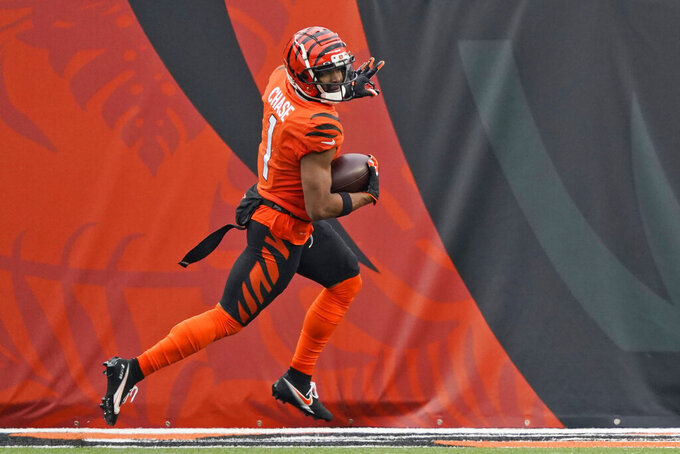 Cincinnati Bengals wide receiver Ja'Marr Chase celebrates after scoring a touchdown during the second half of an NFL football game against the Kansas City Chiefs, Sunday, Jan. 2, 2022, in Cincinnati. (AP Photo/Jeff Dean)

CINCINNATI (AP) — Many in Cincinnati scoffed when the Bengals passed on elite Oregon offensive tackle Penei Sewell to take Ja'Marr Chase with the fifth-overall pick in the NFL draft last spring.

Cincinnati sorely needed offensive line help, and Sewell seemed an obvious choice. Chase, like Sewell, sat out the pandemic-shortened 2020 season and was perhaps less of a sure thing.

It's hard to quibble with that call now.

After shaking off some rust, Chase emerged as a record-breaking star and leading candidate for Offensive Rookie of the Year while helping Cincinnati (10-7) get to the postseason for the first time since 2015.

“I still have a lot more to do,” Chase said. "Hopefully I can break some playoff records.”

The Bengals used the last two drafts wisely to add some critical parts and proven winners who drove this worst-to-first AFC North champion team. Taking Burrow with the first overall pick in the 2020 draft was a no-brainer. He won the Heisman Trophy and a national championship with LSU in 2019. His teammates — half joking, half not — nicknamed him “Joey Franchise.”

Then came Chase, reuniting him with former LSU teammate Burrow.

“Well, when we drafted (Chase), he said he was going to break all the records, and it was hard to know if that was going to be true or not," Cincinnati coach Zac Taylor said. “He’s put himself in a position to do that, not just relying on his talent, but becoming a professional, really since day one and in his consistency over the course of the season.”

"Between Joe and Ja’Marr and I, our last couple first-round picks all have national championship rings," noted tackle Jonah Williams, the team's top 2019 draft pick from Alabama. “And there’s a bunch of other guys on the team, too, who have been there. That feeling of being in a big game isn’t as daunting as it might be for people who haven’t experienced that.”

Guard Jackson Carman, a 2021 second-rounder who also has a national championship ring from Clemson, was the sixth man on a much-improved O-line. Kicker Evan McPherson, a fifth-round 2021 pick out of Florida, made 85% of his field-goal attempts — including 9 of 11 from 50 yards or more — and could give Cincinnati some stability there for years to come.

“A lot of them have playoff experience that’s very specific to the culture and kind of how we want to build this team,” he said. “That’s not to say you’re not going to take great players that played for other college teams that weren’t in the playoffs, but we’ve got a quarterback and some other guys who have been in these types of moments before. And I think that carries over to a lot of guys who haven’t been in those situations.”

The Las Vegas Raiders, Cincinnati's opponent Saturday in the opening round of the playoffs, haven't been quite as lucky.

The 2020 draft was one of the worst in recent memory with Las Vegas cutting both first-rounders earlier this season. The 2021 class has been a little better even though first-round tackle Alex Leatherwood was forced to move inside to guard and has struggled there as well.

The Raiders' top 2020 pick, receiver Henry Ruggs III, showed promise on the field this season but was released after being charged with felonies in a DUI crash that killed a 23-year-old woman in November.

Sewell, by the way, went to the Lions as the seventh overall pick and had a solid rookie season, albeit for a bad team.

The Bengals' O-line remains a work in progress, but they couldn't be happier with their exciting young draftees.

“You got someone like Franchise back there who, when you put the ball in his hands is going to make a play, and he expects us to do the same,” said tight end C.J. Uzomah, a seven-year veteran who at 28 is one of the team's senior members. “And you got somebody like Ja'Marr over there. The chemistry was already there, and now it's exploding and people are seeing just how great Ja'Marr is already. It's fun. It's a fun atmosphere, it's a fun locker room, it's a fun huddle.”