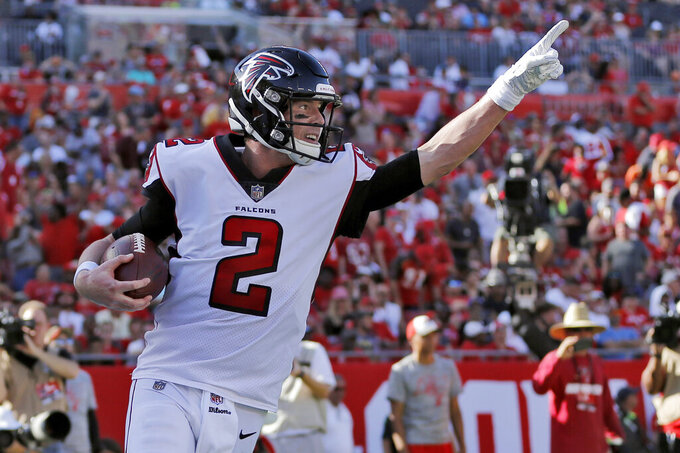 FILE - In this Dec. 30, 2018, file photo, Atlanta Falcons quarterback Matt Ryan (2) celebrates after catching a 5-yard touchdown pass from Mohamed Sanu during the second half of an NFL football game against the Tampa Bay Buccaneers in Tampa, Fla. The Falcons have gained some much-needed salary cap room by restructuring Ryan’s contract. The Falcons confirmed that $8.75 million of Ryan’s 2019 base salary will be paid as a signing bonus. (AP Photo/Mark LoMoglio, File)

The Falcons on Tuesday confirmed that $8.75 million of Ryan's 2019 base salary will be paid as a signing bonus. The move creates $7 million in cap space, more than doubling the team's available funds for free agency and the NFL draft.

The tweak to Ryan's contract leaves Atlanta with approximately $13.5 million in cap space. The Falcons still rank only 27th in the NFL in available cap room, according to Spotrac.

The adjustment to Ryan's contract was first reported by ESPN.

When Atlanta placed a $15.209 million franchise tag on Jarrett on March 4, Dimitroff said he still hoped to negotiate a long-term contract with the defensive tackle.

The Falcons can negotiate with Jarrett until July 15. Jarrett, 25, had 52 tackles and set career highs with six sacks and three forced fumbles as the leader of Atlanta's defensive front in 2018.

Dimitroff said at last month's NFL combine he believes the team's highest-paid players deserve the salaries but acknowledged the top-heavy payroll can be challenging.

"We have a group that we think deserves it and we know we've put ourselves on the line putting those types of players on our roster," Dimitroff said, adding the Falcons "have some expensive people that we need to continue to look at, make sure they're producing, which we feel they are, and make sure we build around them strategically so that we can continue to put together a team that we think and feel will be thriving in the NFL."

The Falcons finished 7-9 in their disappointing 2018 season, only two years after their Super Bowl loss to New England. The losing season increases the pressure on Dimitroff and coach Dan Quinn in 2019.

Ryan, 33, posted numbers last season that compared with his 2016 MVP season. He passed for 4,924 yards with 35 touchdowns and only seven interceptions.

"Going back to when I first got this job in 2008, it was so important for us to have that quarterback in place, as we know," Dimitroff said. "... To have Matt here has been great for us and we'll continue to grow and build around him."