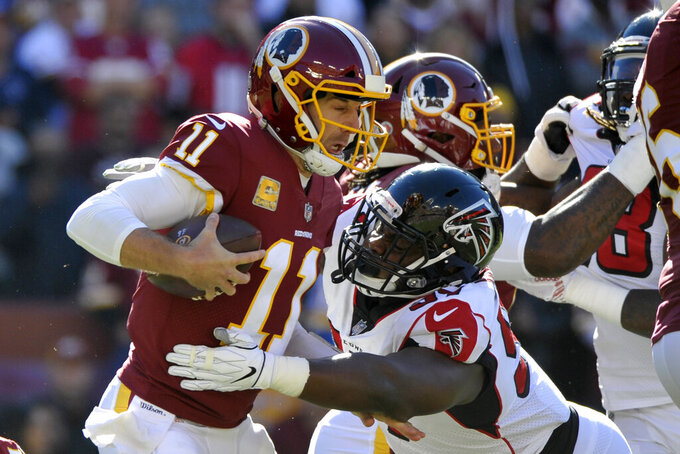 FILE - In this Nov. 4, 2018, file photo, Washington Redskins quarterback Alex Smith, left, is sacked by Atlanta Falcons defensive tackle Grady Jarrett during an NFL football game in Landover, Md. The Falcons have agreed to terms with Jarrett on a four-year contract extension before the NFL deadline for franchise-tagged players. (AP Photo/Mark Tenally, File)

ATLANTA (AP) — The Atlanta Falcons have agreed to terms with defensive tackle Grady Jarrett on a four-year extension before the NFL deadline for franchise-tagged players.

The Falcons had until 4 p.m. ET Monday to finalize a multi-year deal with Jarrett, and general manager Thomas Dimitroff said in a statement that the Falcons made clear since last season ended that a new contract for Jarrett has been a priority.

Terms were not disclosed. NFL.com reported the deal is worth $68 million and makes Garrett the third highest-paid defensive tackle behind Aaron Donald of the Rams and Philadelphia's Fletcher Cox.

Jarrett tied an NFL record in the 2017 Super Bowl with three sacks in a loss to New England, matching Darnell Dockett, Kony Ealy and Reggie White.