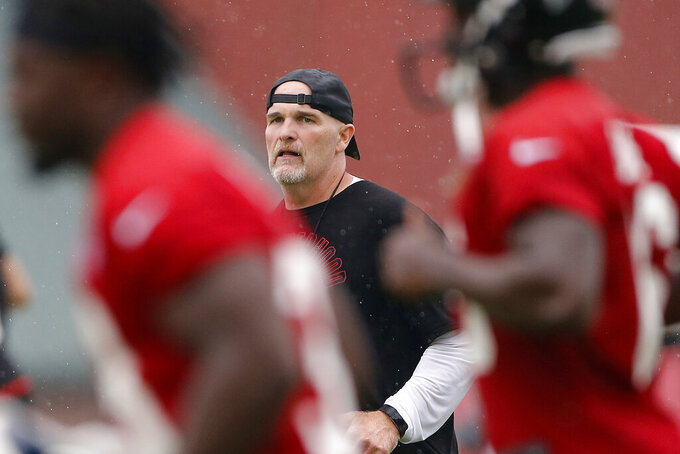 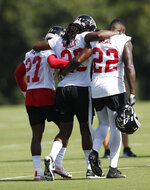 FLOWERY BRANCH, Ga. (AP) — Injuries already are mounting for an Atlanta Falcons' defense hoping to avoid a repeat of its 2018 health woes.

Coach Dan Quinn confirmed Tuesday that safety J.J. Wilcox will miss the season with a right knee injury. Also, defensive tackle Michael Bennett has suffered a broken ankle and will miss the start of the season. Both were hurt on Monday's opening day of training camp.

Wilcox worked with the first-team defense this offseason while Keanu Neal continued his rehabilitation from a knee injury. When Wilcox was hurt on Monday while covering wide receiver Christian Blake, Neal was one of the first players to offer comfort.

"I've been through it," Neal said Tuesday. "I knew what it's like to get that news. It sucks."

The loss of Wilcox is significant. Even though Neal is on track to reclaiming his starting job, Wilcox was expected to serve as the team's third safety.

Neal and safety Damontae Kazee helped Wilcox off the field after the injury. Quinn said Neal had a message for the defense after practice.

"As we went to the team Keanu said, 'You just can't take it for granted. You never know when these opportunities can be taken from you," " Quinn said. "It was so fresh in his memory that he shared that with the other defensive guys."

Atlanta lost linebacker Deion Jones and both safeties, Neal and Ricardo Allen, to injured reserve last season. The Falcons also lost running back Devonta Freeman and both starting offensive guards on the way to a 7-9 finish.

The injuries at the start of training camp were quickly followed on Tuesday by a move to bolster the defense. The Falcons and former Kansas City Chiefs defensive end Allen Bailey agreed to a two-year, $10.5 million contract.

Bailey, 30, had a career-high six sacks for the Chiefs in 2018. He could join practice on Wednesday.

Quinn said the team began talking with Bailey at the start of free agency. The team placed an emphasis on finalizing new contracts for Jones and defensive tackle Grady Jarrett before completing the deal with Bailey.

"I'm really glad he wanted to be a part of this because we really wanted him to be here," Quinn said.