Falcons have several areas to fix after sloppy opener 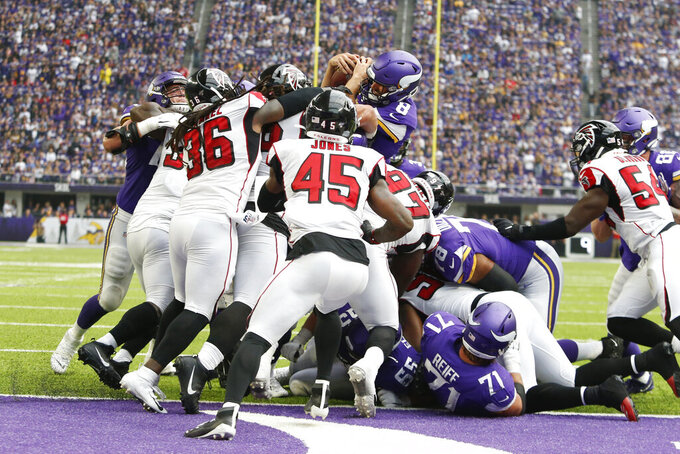 FLOWERY BRANCH, Ga. (AP) — Say this much for the Atlanta Falcons: They wasted no time showing how ill-prepared they were to start the season.

The Falcons were sloppy from the start. Matt Ryan was sacked for an 8-yard loss on the first play from scrimmage. Three snaps later, Minnesota blocked a punt, and two snaps after that the Vikings threw a 23-yard touchdown pass.

That's all three phases of the game breaking down right after kickoff, and the day only got worse in a 28-12 loss. The offense had three giveaways and lost rookie right guard Chris Lindstrom to a broken foot. The defense, which gave up a touchdown on the second drive, too, had no takeaways and was gouged for 172 yards rushing.

"I was more (ticked) off than I've been in a long time, and we've had tough losses," Quinn said. "There was a lot of preparation, a lot of buildup that goes on to start the season. The energy, to have that right, sometimes it can feel like an Olympic race. You're ready to go and it's false start, false start before you even get going."

Quinn was bothered most, and rightfully so, that some of Atlanta's best veterans played poorly. Ryan threw two interceptions that could've easily been avoided. Running back Devonta Freeman lost a fumble early in the second quarter to set up Minnesota's third TD. Left tackle Jake Matthews had one of his roughest days in six solid years.

And that's just the offense. Quinn, after his fourth season ended 7-9, fired all three of his coordinators and took personal charge of the defense, and his unit couldn't have looked much worse against the run.

Quinn complicated the situation by switching throughout the game from his customary 4-3 alignment to a 3-4 scheme, a move he will need in games against a run-pass option quarterback, but that was unnecessary against Kirk Cousins, who passed just 10 times for 98 yards.

Not much. Defensive tackle Tyeler Davison led the team with eight tackles. Tight end Austin Hooper caught all nine of his targets for 77 yards.

The offensive line is in flux. The unit began the day with three new starters and lost Lindstrom in the third quarter. Matthews struggled most of the afternoon. Rookie Kaleb McGary started at right tackle but split snaps with Ty Sambrailo.

Davison led the team in stops, but Grady Jarrett is still the main man at defensive tackle. Jarrett, who signed a lucrative contract extension in July, had five tackles, a sack and a forced fumble.

"We've known about Grady, but to see him take another step this offseason and where he's starting this season, I think that goes a lot to the work that he put in even when he wasn't here," Quinn said. "The unseen grind."

Ryan is the Falcons' marquee player and franchise cornerstone. The 2016 NFL MVP can't make the kind of mistakes he had against Minnesota and expect his team to stay relevant.

Both of his interceptions were unnecessary. He threw into tight coverage for Julio Jones on his first pick, which came on the second possession and set up Minnesota's second score. He rolled right on the second pick in the third quarter and should've thrown the ball out of the end zone. Instead, he set up the Vikings' fourth TD.

The news was bad for Lindstrom, who will spend the next eight weeks on injured reserve. The 14th overall draft pick is scheduled for surgery later this week and is eligible to return to game action in Week 10 at New Orleans.

Receiver Russell Gage is in the concussion protocol after getting hurt Sunday.

Immediate fixes are needed in the run defense. The team failed to set the edge and force ball carriers into tight space, getting particularly embarrassed on the second and third level.

Pro Bowl center Alex Mack is eager for the offensive line to settle on a starting five. Losing Lindstrom means the Falcons will start Jamon Brown at right guard against Philadelphia. He was signed to provide depth in the offseason and was inactive at Minnesota.