Fields' lapse on fumble costs Bears in loss to Cowboys 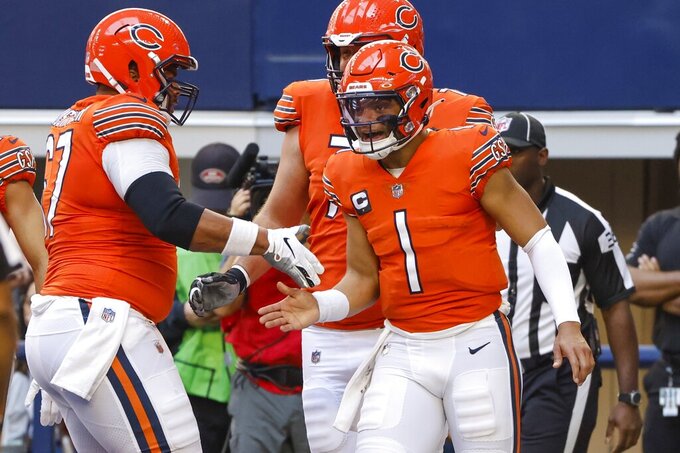 Chicago Bears' Justin Fields is congratulated after running for a touchdown during the first half of an NFL football game Sunday, Oct. 30, 2022, in Arlington, Texas. (AP Photo/Ron Jenkins)

ARLINGTON, Texas (AP) — Justin Fields planted both feet inches from Micah Parsons, and bunny-hopped over the Dallas linebacker who had just recovered a fumble.

The Chicago quarterback wouldn't mind having that moment back.

“It was my fault for just hopping over him,” Fields said. “I should’ve tagged him.”

The Cowboys had the touchdown to prove it, a 36-yard return of David Montgomery's fumble by the reigning NFL Defensive Rookie of the Year in the third quarter of a 49-29 win over the Bears on Sunday.

Dallas quarterback Dak Prescott sure thought Parsons was down, having seen the recovery but immediately heading toward offensive coordinator Kellen Moore to talk about the next series.

Except that Parsons got up, thinking he would be celebrating and instead hearing teammates telling him to run. He took off, stumbled near the goal line and rolled in the end zone to give Dallas a 42-23 lead.

Yes, this is the same Parsons who believes the speed in his dynamic pass-rushing ability translates to just about any skill position.

“Honestly, I'm like, 'Geez, I'm going hear this for a while about how he needs to run the ball or be on offense,'” Prescott said.

“I saw the fumble happen, thought it was down, I was running to talk to Kellen to figure out what was coming and then we looked at each other, 'I guess we're staying on the sideline.'”

Montgomery caught a pass, then lost the ball in the open field. Parsons won a race to the ball with safety Jayron Kearse. He had it corralled on all fours when Fields jumped over him.

Parsons is among the fastest players in NFL history to reach 20 sacks, and has already forced five fumbles thanks mostly to his penchant for getting to the quarterback.

“Zeke said I look just like him,” Parsons said. “I think I definitely deserve a rep now. They can’t say they haven’t seen it in the game. So hopefully I get thrown in on a goal-line package or red zone package.”

Fields and Parsons were workout buddies before the 2021 draft, then went one pick after the other starting with the former Ohio State QB at No. 11 to the Bears.

Now the fellow Big Ten alums (Parsons went to Penn State) are linked by one of the strangest plays of 2022.

“You’ve got to touch him, man,” Chicago right tackle Riley Reiff said. “I kind of had an angle at it. I tried making a play. Obviously, I’m not the most athletic guy out in space. But hats off to them.”

“Obviously very excited, but part of me is annoyed because he wants to be on offense already now,” McCarthy said. “I’m going to have a hard time keeping him out of my office.”

Ah, but the coach already has his rebuttal.

“His ball security is awful,” McCarthy said. “So he still needs to focus on defense.”