Fine line between longevity, Brady and a Sayers-like career 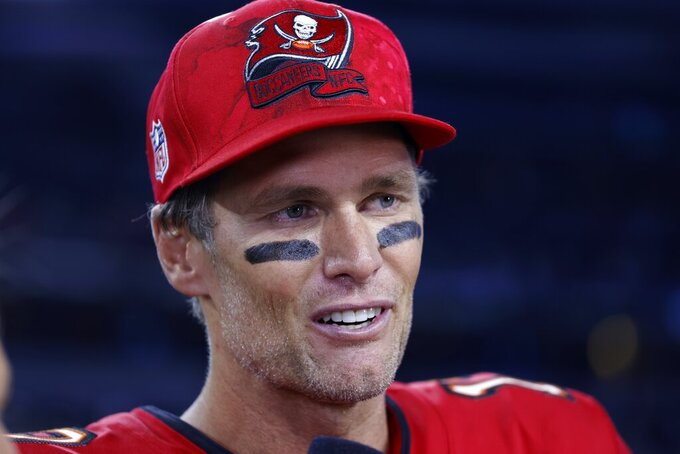 TAMPA, Fla. (AP) — There’s a fine line between a Tom Brady and a Gale Sayers.

Whether a player is a seven-time Super Bowl champion who plays well into his 40s like Brady or all-time great running back knocked out of football during his prime like Sayers there’s an element of luck to longevity in the NFL.

It's inescapable, regardless of the era.

For all the evolving technology, increased awareness of the value of year-round fitness regimens and rule changes designed to make the game safer, players concede good fortune is a common denominator to staying on the field.

“People don’t like to use the word luck, but there’s no doubt there’s something to that," Hall of Fame linebacker Derrick Brooks said. “You do have to take care of your body and do everything you can to give yourself a chance to play every week, but you’ve got to be fortunate, too.

“I can’t tell you how many times my ankle got twisted in the bottom of a pile or somebody hit me and I’m thinking, man, I’m lucky I didn’t get hurt,” Brooks added. “Then you look at somebody else and think that’s not that bad a hit, and it turns out to be a serious injury. You just never know.”

Trey Lance can relate. The San Francisco quarterback suffered a season-ending injury Sunday, just two games into the season. But the 22-year-old needs to look no further than Brady for inspiration.

In a league where the average career spans three to five years, Brady is in his 23rd season and is the oldest starting quarterback in NFL history at age 45. The league’s career passing leader returned from a knee injury that sidelined him for all but one game in 2008 to shatter numerous records and raise the NFL standard for winning.

Sayers, an electrifying runner whose career with the Chicago Bears was cut short by injuries 50 years ago, wasn’t as fortunate.

The first player to score six touchdowns in a NFL game retired in 1971, having appeared in just 68 games over seven seasons. Sayers played in two games each of his last two seasons, but had such an impact on the Bears and the league that at age 34, he became the youngest player ever inducted into the Hall of Fame.

“We don’t know when our career is going to be over. We just got to prepare for each day and attack each day with our best effort,” said New Orleans Saints quarterback Jameis Winston, who’s back this season after missing much of 2021 while recovering from surgery to repair the anterior cruciate ligament in his left knee.

“I’m fortunate I get to play quarterback. I don’t have to play running back, linebacker, defensive line or offensive line. So, I can’t complain,” Winston added. “Those guys in the trenches, they’re really hitting. They’re really putting their life at risk every play. But they enjoy that, and they do whatever it takes to protect themselves.”

Brett Favre made 297 consecutive regular-season starts from 1992 to 2010 for the Green Bay Packers, New York Jets and Minnesota Vikings — the longest such streak for an offensive player in league history. Jim Marshall had the longest iron-man streak for a defensive player, starting 270 straight with the Vikings from 1961 to 1979.

Brooks’ stretch of 208 consecutive starts for the Tampa Bay Buccaneers from 1996 to 2008 is tied for 12th on the all-time list with Peyton Manning.

“Every player knows the risk, what’s at stake on every play,” Brooks said. “You don’t think about it. You go out and play. You can’t play in fear.”

Saints defensive end Cameron Jordan, who’s father Steve played in the NFL, was drafted by New Orleans in 2011 and has only missed one game his entire career.

And that was because of COVID-19, not a football injury.

“Everybody plays with nicks and bruises,” Jordan said. “The ongoing funny story my dad would tell me, or I’ll probably tell my kids, is that the first day you play football is the last day you’ll be truly 100 percent healthy.”

One reason for that is a hurt player will take the field while an injury will sideline them.

Brady has the longest streak of consecutive starts among active quarterbacks (94). He’s closing in on becoming the only player with three streaks of at least 100.

The Bucs entered this season with two new young starters on the offensive line. Second-year pro Robert Hainsey and rookie Luke Goedeke had earned Brady’s trust in practice, in part by “showing up every day” and learning from their mistakes.

“Football is a dangerous sport. If they don’t do a great job, they put other people at risk. If you don’t know what you’re doing, it could be dangerous for the (running) backs and for the quarterback, and vice versa,” Brady said.

“No one wants to be hung out to dry,” Brady added. “We’re all out there together, we’re all trying to protect each other. The more you feel like guys know what to do and care about what they’re doing, I think you gain more trust in them.”

Aaron Rodgers is 38 and in his 18th season. He said shoddy playing surfaces can contribute to injuries, and noted it also can be difficult avoiding fluky things from occurring off the field.

The Green Bay quarterback said he fractured his left pinky toe while working out at home during his quarantine after a positive COVID-19 test in 2021.

While the injury didn’t cause him to miss any games and didn’t limit his effectiveness, Rodgers recalled playing without practicing because of his ailing toe.

Jordan knows all about doing whatever is necessary to be available for the Saints.

“In terms of not missing a game, I feel like that’s just major blessings from above," the defensive end said. “I feel like God has blessed me with not only talent but opportunity and I’ve been able to take advantage of each and every opportunity presented.

“I mean, long before the NFL, there’s college, and I missed a game there, too,” Jordan added. “So I’ve missed one at that level, one at this level. Apparently, I’m allowed to miss one.”

Not many NFL players can say that.