The fire still burning, Witten wants his snaps with Cowboys 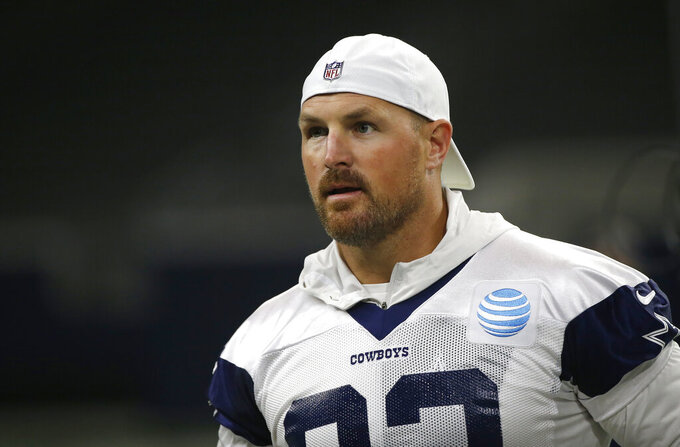 In this May 29, 2019, photo, Dallas Cowboys tight end Jason Witten (82) stands on the field during an organized team activity at its NFL football training facility in Frisco, Texas. Witten talks a lot about blending in now that he's back for what will be a club-record 16th season with the Dallas Cowboys following a year in retirement. (AP Photo/Ron Jenkins)

FRISCO, Texas (AP) — Jason Witten talks a lot about just wanting to blend in now that he's back for a club-record 16th season with the Dallas Cowboys following a year in retirement.

Ask about playing time among a group of decidedly younger tight ends, and, well, the franchise leader in catches and yards receiving doesn't seem quite sure what to say.

In other words, an 11-time Pro Bowler many consider an easy choice for the Pro Football Hall of Fame whenever he retires for good just isn't comfortable accepting the idea of fewer snaps when he took almost all of them for 15 years.

"Those coaches work long hours; they're smart," Witten said a week before getting all the first-team reps in the only offseason practice reporters saw in which he participated. "I think that I can't worry about how that plays out. My job is to kind of make it tough on them. We all benefit if that's the case."

Witten is back after just a year as lead analyst on "Monday Night Football" because he missed playing and thought the Cowboys looked like future contenders for a Super Bowl — something he could never deliver — despite a divisional playoff loss to the Los Angeles Rams last January.

The 37-year-old is also back because, unlike best friend and former Dallas quarterback Tony Romo, the Cowboys hadn't replaced him. Dak Prescott sent Romo into retirement/broadcasting with a debut worthy of the NFL Offensive Rookie of the Year award after the 10-year starter got hurt in 2016.

The only experienced tight end trying to replace Witten last season — 2015 seventh-round pick Geoff Swaim — is in Jacksonville now after another injury-plagued year.

Blake Jarwin, an undrafted pass catcher lacking Witten's blocking ability, had the biggest impact by tying the club record for tight ends with three touchdown catches in a game , but not until a meaningless regular-season finale.

And then there's Dalton Schultz, drafted in the fourth round about a week before Witten announced his sudden retirement last year . He went from thinking he'd have a year to learn from one of the best, to not, to Witten leading the tight end room — and probably taking a lot of the snaps.

"I was saying this when I got drafted last year, he's only going to be good for this organization, no matter what," Schultz said. "He was my idol growing up, which is weird. Don't tell him I said that. Just to have a guy that you literally grew up watching, trying to emulate in your room, is pretty cool."

Witten didn't get his old locker back, or his parking space at the practice facility. He appeared in the locker room only once in the three days it was open to reporters during offseason workouts. The team's mandatory minicamp starts Tuesday.

But his presence on the field was unmistakable, even on the days he didn't participate in drills. During simple footwork sessions, Witten worked alongside tight ends coach Doug Nussmeier, another who joined the Cowboys last year only to discover Witten wouldn't be there.

With Witten, the Cowboys have one of two tight ends in NFL history with at least 1,000 catches and 10,000 yards. The other, Tony Gonzalez, will be enshrined in the Hall of Fame in August after being voted in on his first try.

A third-round draft pick by Dallas in 2003, Witten figures to build on the club records of 1,152 catches and 12,448 yards. The 16th season will break a tie with defensive end Ed "Too Tall" Jones, safety Bill Bates and late offensive lineman Mark Tuinei for the most among Cowboys.

While Witten never has been a prolific scorer, he needs six receiving touchdowns to break Dez Bryant's team record of 73. Of course, numbers have nothing to do with why he came back.

The Cowboys have the pieces, and now Witten is another. Anything less than the franchise's first trip to the NFC championship game since the last of its five Super Bowl titles during the 1995 season will be a disappointment.

"I kind of like that the back's against the wall for the whole football team, the whole organization," Witten said. "I want those guys to know that I'm just a part of that. I want to be a part of it. It's as simple as that. I didn't overthink it. The fire was too strong."