Foles signs with Jaguars, welcomes being a starter again 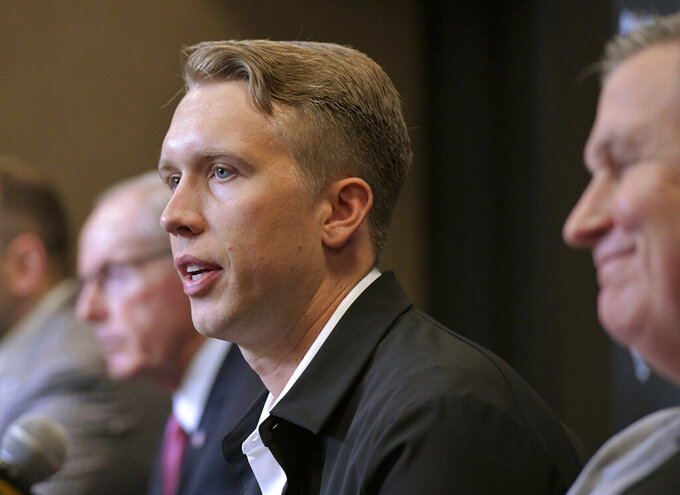 JACKSONVILLE, Fla. (AP) — Tom Coughlin gushed about Nick Foles for several minutes and then had one request for his new Jacksonville Jaguars quarterback.

"I hope every game in 2019 is like the Oakland game of 2013," said Coughlin, the franchise's top executive.

That's the game in which Foles threw for 406 yards, with seven touchdown passes, no interceptions and a perfect (158.3) quarterback rating.

Foles nodded his head, smiled and turned to look at coach Doug Marrone.

The Jaguars formally introduced Foles on Thursday, hours after he signed a four-year, $88 million contract that includes $50.125 million guaranteed.

Foles welcomed being a starter again, embraced his new home, and gave Jacksonville the belief it has a franchise quarterback for the first time since Mark Brunell led the team to two AFC championship games (1997, 2000).

"This is a real good day," Coughlin said. "This signing signals change and a new start for the Jacksonville Jaguars."

It also signals the end of the Blake Bortles era.

Coughlin and general manager Dave Caldwell both said they have no regrets about giving Bortles a three-year, $58 million contract just 13 months ago. The deal included $26.5 million guaranteed and will cost the Jags $16.5 million in dead money in 2019. Jacksonville released Bortles on Wednesday, parting with him after five up-and-down seasons.

"It was the right thing to do," Coughlin said. "The guy took us to the AFC championship game (in 2018). There wouldn't have been anybody that would have disputed the fact that he deserved the opportunity. ... So what we did at that point in time is try to fortify our team around him. Obviously, we wish it was better, but I have no regrets about that."

Because of the financial commitment to Bortles, the Jags had to cut five veterans — including former Pro Bowl defenders Tashaun Gipson and Malik Jackson — to create enough salary cap space to sign Foles.

Foles will count roughly $12 million against the cap in 2019, leaving Jacksonville about $12 million to spend frugally on a remaining free agent or two.

"We have limited funds, so we're obviously studying everything," Coughlin said. "We'd like to think there's a bargain or two out there that we can advantage of. That's basically where we are."

The Jaguars need a right tackle and at least two tight ends to help Foles.

Coughlin also made it clear the team has no plans to deviate from its run-first approach.

"I think that Nick won't have any trouble handing the ball off," Coughlin said. "We believe in balance. I think it's the factor which allows and helps the quarterback — to be able to run the ball, to be able to keep defenses off-balance, to not know whether you're going to run or throw. ... But what we truly believe is this quarterback, this young man, gives us the best chance to win."

Foles led the Eagles to four playoff victories over the last two seasons, including the franchise's first NFL title since 1960. He earned 2018 Super Bowl MVP honors and made himself the league's premier quarterback commodity.

Foles will reunite with former Eagles quarterbacks coach John DeFilippo, who was hired in January to be Jacksonville's offensive coordinator.

"Coach DeFilippo over here is someone that I've been on the biggest stage with," Foles said. "We have gone through so much together. We know each other's personalities. He knows how I like to play the game, what my tendencies are. We know how to work together, so that is something that is great."

Foles also will wear No. 7 for the first time since high school.

He wanted it in college at Michigan State, but Brian Hoyer had it. He transferred to Arizona, where Willie Tuitama had it. Philadelphia drafted him in 2012, but Mike Vick had it. Foles signed with the St. Louis Rams, who retired it in honor of Bob Waterfield. He signed with Kansas City, but Aaron Murray had it. He could have donned No. 7 during his return to the Eagles, but opted to stick with No. 9.

"This was the first opportunity where I could go back to my roots: my high school and my childhood and I was just playing free like that and wear my No. 7," he said.

Now, he just has to perform like he did against the Raiders in 2013.

"This is where I want to finish my career and this is ultimately where we are going to put down roots," Foles said. "I don't know if it is ever something I'm going to be able to sit back and realize, 'Wow, that really happened.' It's been a wild ride, but we are so grateful for everything that happened, and we are looking forward to it continuing on."