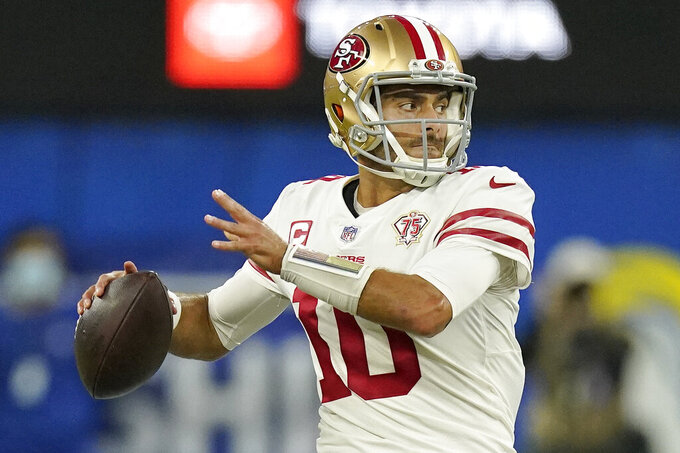 SANTA CLARA, Calif. (AP) — The San Francisco 49ers went through another round of roster cuts with quarterback Jimmy Garoppolo still on the roster.

The Niners reduced the active roster from 85 players to 80 on Tuesday without making a move with Garoppolo, their former starter who has spent all training camp working out on his own while San Francisco tries to find a trade partner.

Garoppolo spent the start of practice Tuesday throwing on a side field without his teammates as he has not taken part in any meetings or practices this summer. San Francisco has turned the offense over to Trey Lance and still hopes to trade Garoppolo before the start of the season but there haven't been any teams willing to take on his $24.2 million nonguaranteed salary for 2022.

Coach Kyle Shanahan said “any scenario is possible” in terms of whether the Niners trade, keep or release Garoppolo but added that he has recovered from offseason shoulder surgery.

“He looks the same as he always has," Shanahan said. "He always throws really good, so it looks the exact same.”

General manager John Lynch told the team's flagship radio station KNBR that he feels like a resolution is “getting pretty close.” San Francisco must reduce its roster from 80 players to 53 next Tuesday.

“From the beginning, I think our take has been that Jimmy’s a good player," Lynch said. "He’s a starting quarterback all day long in this league, and I think proven to be a really good one. Just look at the record, look at where he’s taken us. And so, with guys like that, you don’t just give it away.

“I think there’s been some complications that have been much chronicled with his injury. The good news is he’s kind of come out of that, and no one’s really presented something that would make us jump, as to now. So I think the options, not much has changed. The options are open but just like always, having some sort of a deadline tends to force action on these things, and we’ll see."

Lance has run the offense the entire offseason as he's ready to take over as starter after playing sparingly behind Garoppolo as a rookie.

Lance and the rest of the starters are expected to play as much as the entire first half in the exhibition finale at Houston on Thursday night. They mostly sat last week in Minnesota.

The other big question at quarterback for the Niners comes behind Lance. Nate Sudfeld and rookie Brock Purdy alternated playing against the Vikings as Shanahan wanted to get a longer look at Purdy.

Sudfeld signed a contract with a $2 million guaranteed salary but San Francisco might be worried about whether they could get Purdy on the practice squad without another team claiming him.

That could lead the Niners to keep three quarterbacks on the 53-man roster at the expense of another position.

“It’s always hard, but it’s something you debate every year,” Shanahan said. "It’s something we’ll debate this year. It’s not always just the quarterbacks. It’s kind of like you asked, it’s how it plays out with other positions.”