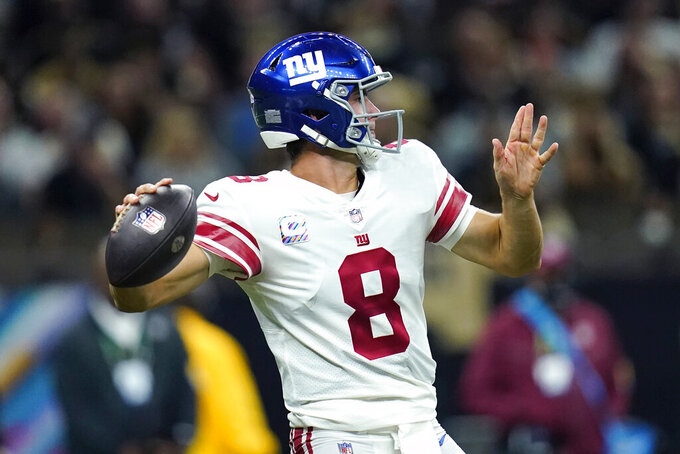 EAST RUTHERFORD, N.J. (AP) — The NFL has produced surprises on a weekly basis and none might have been as big as the New York Giants rallying and beating the New Orleans Saints in overtime.

Forget that the 27-21 decision gave the Giants their first win in four games. It was how they did it and circumstances surrounding the game.

Joe Judge's team was coming off two straight last-play losses against Washington and Atlanta. It was playing with two of its top receivers sidelined with injuries and a new left guard.

The biggest obstacle might have been New York was in New Orleans for the Saints' first home game this season. Hurricane Ida had displaced the team for weeks.

Wrong . Daniel Jones and Saquon Barkley rallied the Giants from an 11-point fourth-quarter deficit. Graham Gano, who earlier saw his streak of 37 straight made field goals snapped, kicked a game-tying 48-yard field goal and Barkley won it in overtime with a 6-yard run.

“We have a special group,’’ Barkley said. “I say it every week and it’s not really easy to believe me after a loss. But I think that locker room is starting to believe in each other and see what we have.’’

Still, the Giants need to take the next step. They have to follow up their unexpected win with another one in a game few expect them to win. They are heading to Dallas next weekend to face the NFC East-leading Cowboys, who have won three in a row after losing their opener to the Super Bowl champion Bucs.

It's not going to be easy. Dak Prescott has returned from the broken right ankle he sustained against the Giants around this time last season and is playing well. Of greater note, Dallas' defense seems vastly improved.

If the Giants pull another surprise, they are back in the playoff hunt. If not, they are once again facing a long fruitless second season under Judge and more questions.

Jones and Barkley. The third-year quarterback had a career-best 402 yards passing and two touchdowns. The net passing yards is the ninth-highest total in franchise history. Barkley had his most successful game since tearing his ACL in the second game of last season. He had 13 carries for 52 yards and a game-winning 6-yard TD run in overtime. He also caught five passes for 74 yards, including a 54-yard touchdown. The 126 yards from scrimmage was Barkley's 21st game with more than 100 yards.

Tackling. The defense seemingly forgot how to tackle at times against the Saints, particularly when Taysom Hill carried the ball. He broke at least seven tackles on his 8-yard TD run in the third quarter. It also seemed few wanted to hit him on his 8-yard TD run early in the fourth quarter.

Cornerback James Bradberry. The Pro Bowl cornerback was turned outside-in on a 58-yard pass to Marquez Callaway in the third quarter. He fell for the same move by Deonte Harris later in the quarter, but Hill waited too long to throw and Bradberry intercepted the ball. A quicker decision and it's another big gain.

Starting safety and punt returner Jabrill Peppers sustained a hamstring injury, the same injury that sidelined Shepard and Slayton. It's likely he won't play against Dallas. C.J. Board had a 26-yard punt return in the fourth quarter before Jones' TD pass to Barkley started the comeback.

1 and 3 — Not the record. Turnovers and penalties. The Giants lost the ball once and were flagged for three penalties for 25 yards. The turnover was an interception on the final play of the first half. That's how you win games, even if just barely.

It's only the fifth game of the season, but facing Dallas might be considered must win. A Giants' loss would put them three games behind the division-leading Cowboys (3-1) and leave them 0-2 in the NFC East. It would make their chances of winning the division a lot slimmer. A win and they are in the hunt.