Harbaugh ready to launch 'new era of football' for Ravens 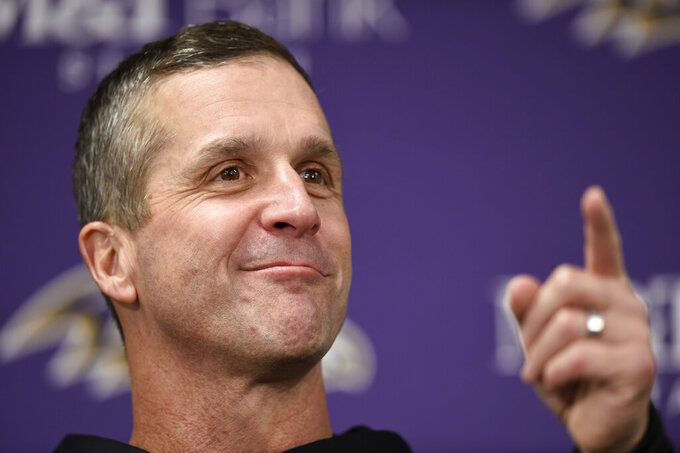 FILE - In this Dec. 30, 2018, file photo, Baltimore Ravens head coach John Harbaugh speaks at a news conference after an NFL football game against the Cleveland Browns, in Baltimore. It should be a busy offseason for Harbaugh, who's working with a new contract, adjusting to a first-year general manager and teaming with a different offensive coordinator. (AP Photo/Gail Burton, File)

OWINGS MILLS, Md. (AP) — After signing a four-year contract, Baltimore Ravens coach John Harbaugh is excited about a "new era" for a team already well on its way to sporting a different look in 2019.

The metamorphosis of the Ravens began with the ascension of rookie Lamar Jackson to starting quarterback in November. In the 2½ weeks since Baltimore was eliminated from the playoffs with a 23-17 loss to the Chargers, Eric DeCosta took over as general manager, Greg Roman was promoted to offensive coordinator and Harbaugh signed a deal through 2022.

After Joe Flacco served as the starting quarterback for the better part of 11 seasons, Harbaugh will team with Roman and DeCosta to put together a run-oriented offense headed by the fleet-footed, slippery Jackson.

Roman replaced Marty Mornhinweg because of his proficiency with the running game and his experience working with quarterbacks who were a threat to run, most notably Colin Kaepernick with San Francisco in 2012 and Tyrod Taylor with Buffalo in 2015.

"This was just me looking at our situation and feeling that was the direction we needed to go," Harbaugh said. "The way our offense was going to be built from the ground up, we needed to start with the running game and build into the play-action pass and then the drop-back pass from there. Kind of built around our quarterback and what he's going to bring to the table going forward."

The Ravens closed the regular season with a 6-1 surge under Jackson, who took over for the injured Flacco on Nov. 18. The switch turned Baltimore into a team that relied on ball control and the ability of Jackson to use his legs more than his arm, and the result was an AFC North title that ended the Ravens' three-year hiatus from the playoffs.

Harbaugh understands completely that Jackson — who ran 147 times for 695 yards and five touchdowns — is at risk every time he tucks the ball and heads downfield. But in the coach's mind, the reward outweighs the potential for injury.

"You can't live your life in fear. I think there's just as much fear on the other side that he's going to take that thing to the house when he gets out and runs," Harbaugh insisted. "So we'll live in that world. Lamar is just a heck of a player. He's a threat every time he touches the ball, run and pass."

With Flacco headed elsewhere as a free agent, Harbaugh said, "We still have to sign a No. 2 quarterback, potentially a No. 3 quarterback. I would probably lean toward the backup being similar to Lamar. Obviously, RG3 (2018 backup Robert Griffin III) is a great option there. Some have written about Tyrod. There are others out there like that."

That task will fall on DeCosta, the longtime assistant to Ozzie Newsome. DeCosta spurned several offers from other teams while hoping the Ravens' job would be his and owner Steve Bisciotti finally made it happen.

Because DeCosta had been around for so long, Harbaugh said the transition has been "seamless."

"Eric's energy, his passion, his ideas, it's exciting," Harbaugh said. "It's a new start, but yet we've been together side by side for 11 years. So we've got all that behind us and we're standing on that."

Regarding personnel, Harbaugh is hoping Pro Bowlers Eric Weddle and Marshal Yanda will return in 2019.

"They're both under contract. Unless something changes along the way, they will be back. No decisions have been made," the coach said. "I want them both back, for sure. We'll do everything we can to make that happen."