Hopkins produces in return, which bodes well for Cardinals 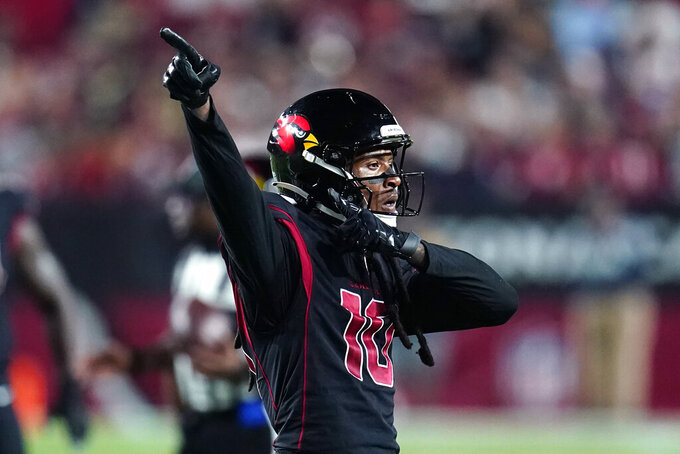 TEMPE, Ariz. (AP) — The return of DeAndre Hopkins was obviously a boost for the Arizona Cardinals.

The two interceptions returned for touchdowns were even more important.

The result was a 42-34 win over the New Orleans Saints on Thursday night that the Cardinals needed to keep pace in the NFC West.

The Cardinals (3-4) can't expect to replicate the heroics of Marco Wilson and Isaiah Simmons, who each had a pick-6 late in the first half to turn a tight game into a fairly comfortable win.

But as long as he stays healthy, Hopkins should be around for the next 10 games. That's a game-changer for the Cardinals, who looked much more competent on offense with the three-time All-Pro commanding attention from the Saints' defense.

“He is as talented as ever,” quarterback Kyler Murray said. “Just having him out there — it didn’t look like there was any rust. He knocked it off if he had any. Just his communication, his feel for the game. All of that, you can’t put a price tag on him.”

Hopkins caught 10 passes for 103 yards in his season debut. The 30-year-old missed the first six games after violating the NFL's policy on performance-enhancing drugs.

Not only was Hopkins a great receiver on Thursday, he's also a peacemaker. He broke up a verbal spat between coach Kliff Kingsbury and Murray late in the first half.

Hopkins didn't divulge what was said, but said it was the mark of a winning team.

“Both of those guys want to win, and I love to see that,” Hopkins said. "I love being a part of a team where two people are dedicated and so focused on winning and obviously you’re going to butt heads.

“I’m not married, but from what I hear, that’s a marriage,” the receiver added with a grin.

Elite receiver. Marriage counselor. Hopkins can do it all.

Now the Cardinals look like a much more dangerous team as the second half of the season approaches.

The defense gave up nearly 500 yards, which is not ideal, but it's hard to ignore the big plays from Wilson and Simmons.

The best news for the Cardinals is that those huge defensive plays are coming from younger players. Wilson is a second-year cornerback while Simmons is a third-year linebacker and former first-round pick.

The Cardinals let veterans like Chandler Jones and Jordan Hicks leave in free agency, taking the gamble that Wilson, Simmons and others were ready to provide big plays. So far, Arizona's front office is looking pretty smart.

The Cardinals still have not scored a touchdown in the first quarter this season and have been outscored 48-6.

Arizona has managed to recover for three wins, but its poor performance early in games remains a big problem.

RB Eno Benjamin was a seventh-round pick three years ago and has slowly developed into a valuable role player. He was forced into a starting role on Thursday because of injuries and responded with 12 carries for 92 yards rushing and a touchdown. He also caught four passes for 21 yards.

Kingsbury said James Conner will be the starter when he returns from an injury to his ribs, but Benjamin has solidified his role as a versatile playmaker when needed.

Seven-time Pro Bowl receiver A.J. Green didn't play a snap on Thursday, which begs the question if he'll have any sort of role in the offense going forward. The 34-year-old is a popular, low-key presence in the locker room, but his production has dipped substantially.

The Cardinals hope more than a week of recovery will allow some of the team's starters to return. Conner, LB Dennis Gardeck (ankle), K Matt Prater (hip), and C Rodney Hudson (knee) were all inactive against the Saints. Kingsbury hopes at least some could return for the Oct. 30 game at Minnesota.

42 — The number of points Arizona scored on Thursday night, which is the most in Kingsbury's four-year tenure in the desert.

The Cardinals play at Minnesota on Oct. 30.