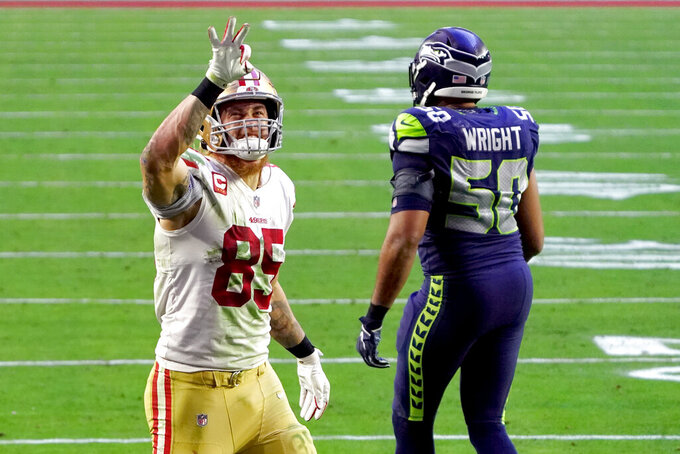 San Francisco 49ers tight end George Kittle (85) signals after a first down as Seattle Seahawks outside linebacker K.J. Wright (50) walks away during the second half of an NFL football game, Sunday, Jan. 3, 2021, in Glendale, Ariz. (AP Photo/Rick Scuteri)

The San Francisco 49ers' season barely got started when the star players began getting sidelined by injuries.

Tight end George Kittle and shutdown cornerback Richard Sherman got hurt in the opener and then several other stars including edge rusher Nick Bosa, quarterback Jimmy Garoppolo and running back Raheem Mostert got hurt the following week.

That set the tone for the entire season as the Niners struggled to stay healthy and fell from a Super Bowl appearance to a 6-10 record in one year.

The 49ers never really got healthy, with players like Garoppolo, Kittle, Sherman, Bosa, Mostert and receiver Deebo Samuel all missing at least half the season.

The team managed to stay in contention for a bit and took a 5-6 record into December before losing four of the final five games during a one-month extended road trip after being kicked out of its home stadium because of county COVID-19 protocols.

“We got behind the eight ball,” general manager John Lynch said. “Sometimes stuff just happens and I think it happened league wide. We certainly got hit by it, not only in the quantity of people that got hurt but the quality. I looked over in the suite yesterday and it look like an All-Pro team. We need those guys on the field, not in the suite watching the game.”

The Niners believe the core of their team is good enough to get back to the Super Bowl, and coach Kyle Shanahan told the players he'd like to keep as much of the foundation together as possible.

While that will be difficult because of a likely reduced salary cap, there still should be plenty of pieces left.

“We had a Super Bowl roster, and it sucks that we didn’t have a chance to put all those guys on the field together enough to have a winning season,” left tackle Trent Williams said.

The biggest decision for San Francisco this offseason will be deciding whether to stick with Garoppolo at quarterback. He was limited to six games because of ankle injuries and has played in only 25 of 48 games the past three seasons because of injuries.

“It’s all about availability,” he said. “I know that. It’s been a series of unfortunate events with the injuries and things like that.”

The Niners have a 22-8 record when Garoppolo starts, but he has not proven himself to be in the upper echelon of QBs in the league. Shanahan and Lynch remain publicly behind Garoppolo but San Francisco can get out of his deal with little dead money so it could target a more proven veteran or someone in the draft.

One of Shanahan’s best moves since being hired was bringing along Robert Saleh as his defensive coordinator. Saleh helped put together a dominant unit last season and managed to piece together another strong one this season despite significant injuries. Saleh figures to be a prime head coaching candidate and is already set to interview with Atlanta, Jacksonville and Detroit. His departure would create a big void.

The best move the Niners made in 2020 was acquiring Williams from Washington during the draft. Williams quickly returned to his Pro Bowl form after sitting out all of last season, and he anchored the offensive line. He’s a free agent and should command a hefty salary, but the Niners are hoping to keep him.

The interior of the offensive line needs work, especially at center and right guard, where San Francisco struggled to find consistent pass blocking all season.

The Niners likely will be saying goodbye to Sherman this offseason after his three seasons in San Francisco. Sherman went from hated rival in Seattle to beloved leader in San Francisco but was hampered by injuries this year. Sherman said it would take a “miracle” for him to return because the Niners have higher priorities like Williams and a long-term deal for linebacker Fred Warner and little available cap room.

The 2020 season did give the Niners a taste of a bright future, even if they didn’t see it enough. Receiver Brandon Aiyuk had an impressive rookie campaign, with 60 catches for 748 yards in 12 games. The combination of Aiyuk, Samuel and Kittle should provide a dynamic offense for whoever is at quarterback if the three can stay healthy after all missing time this season.