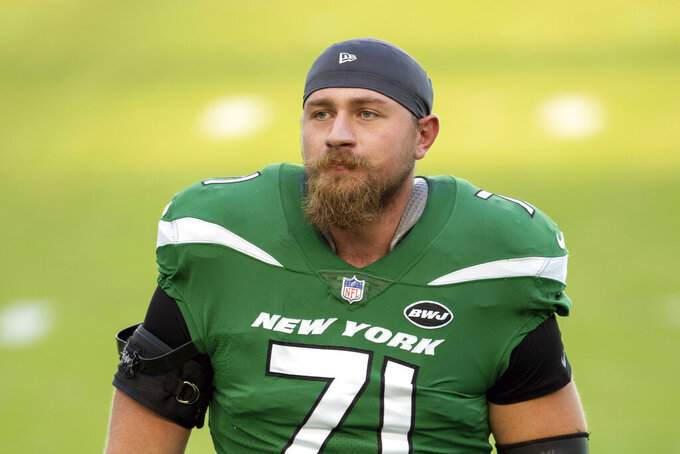 FILE - New York Jets offensive lineman Alex Lewis (71) warms up on the field before an NFL football game against the Miami Dolphins in Miami Gardens, Fla., in this Sunday, Oct. 18, 2020, file photo. Jets left guard Alex Lewis is being benched for the second straight game as a result of what coach Adam Gase called “an organizational decision.” Lewis was limited at practice last Friday for what the team said was not injury related. He didn't play last Sunday against Miami, and Gase announced Friday, Dec. 4 that Lewis wouldn't play against Las Vegas this Sunday after not practicing all week. (AP Photo/Doug Murray, File)

Lewis had already been ruled out for the team's game Sunday against Las Vegas for what coach Adam Gase called “an organizational decision.”

Lewis is dealing with some off-field issues, two people told The Associated Press on condition of anonymity because the team has not publicly discussed details of the situation due to privacy issues.

ESPN.com first reported the team's decision to place Lewis on the NFI list.

Lewis will have to sit out at least three weeks, but one of the people told the AP that the Jets will continue to pay the offensive lineman — something NFL teams aren't obligated to do with players on the NFI list — while he is sidelined. There is hope Lewis could return to play before the end of the season.

Lewis was limited at practice last Friday for what the team said was not injury related. He didn't play last Sunday against Miami, and Gase announced Friday that Lewis wouldn't play against Las Vegas this Sunday after not practicing all week.

Neither Gase nor the winless team has explained the situation surrounding Lewis, who had started all but one game this season before last week.

Gase would not go into any details, other than to say that Lewis' roster spot was not in jeopardy. He also said it was not correct to say Lewis' benching is disciplinary, and the offensive lineman is not being fined by the team.

Lewis has been attending the team's virtual meetings, but has not practiced.

“As soon we have a resolution to this, we can talk more about it,” Gase said.

On Monday, Gase was asked if he and Lewis had perhaps gotten into a “verbal altercation” at some point last week.

The 28-year-old Lewis was acquired from Baltimore in August 2019 for a 2020 seventh-round draft pick. He opened last season as a backup before moving into the starting lineup when Kelechi Osemele was injured. General manager Joe Douglas signed Lewis to a three-year, $18.6 million contract extension in March with the team perhaps viewing him as a long-term part of the offensive line.

Lewis missed the Jets' home game against Buffalo on Oct. 25 because of a shoulder injury, but had been in the lineup until last Sunday. The Jets' latest loss dropped them to 0-11.

NOTES: DL John Franklin-Myers tested positive Thursday for the coronavirus and did not practice as the team had him stay away for precautionary reasons, but follow-up testing revealed it was a false positive. Franklin-Myers was back with the team and practiced fully Friday. ... RT George Fant (knee/ankle) was limited and listed as questionable for the game after being sidelined last week. Gase was optimistic Fant would be able to play. “Unless we have some major setback (Friday), it looks like we’re in good shape with him, which that’ll be good for us,” the coach said. ... OL Pat Elflein (shoulder) was also limited and listed as questionable.