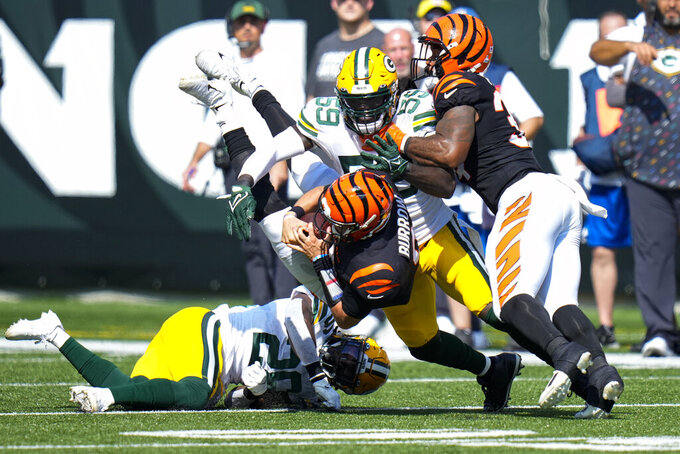 Joe Burrow of the Cincinnati Bengals was taken to a hospital as a precaution after suffering a bruised throat, and Daniel Jones of the New York Giants was carted off the field with a concussion on a rough day for young quarterbacks.

The Bengals said Burrow, the first pick overall in the 2020 draft, was having trouble speaking after a 25-22 overtime loss to Aaron Rodgers and the Green Bay Packers.

Burrow, already playing with a surgically repaired left knee, was knocked down hard in the second quarter by defensive end Dean Lowry and stayed on the ground for several minutes before walking off the field. The Bengals punted, but Burrow returned on the next drive and threw a 70-yard touchdown pass to Ja’Marr Chase.

Jones, the sixth pick overall by the Giants in the 2019 draft, was ruled out against the Dallas Cowboys after sustaining a concussion in the first half. He looked woozy and was taken off on a cart following a hit near the goal line as he was trying to score on a bootleg. Jones tried to get up twice, the second time stumbling before others rushed to keep him upright. After a brief evaluation, the cart came out and took Jones to the locker room.

Chargers guard Oday Aboushi (knee) was knocked out in the first quarter.

Tight end Maxx Williams of the undefeated Arizona Cardinals was carted off the field in the second quarter after a knee injury. Williams caught a 14-yard pass and then his knee appeared to buckle as he ran out of bounds. The Cardinals also lost linebacker Ezekiel Turner (shoulder) and center Rodney Hudson (ribs) in the third quarter.

Derek Carr of the Las Vegas Raiders was shaken up on a quarterback sneak on the first snap of the fourth quarter of a loss to the Chicago Bears. Carr appeared to take a head shot from Roquan Smith, but returned after a brief trip to the injury tent.

New Orleans’ Taysom Hill suffered a concussion while trying to catch a pass in the second quarter of the Saints’ 33-22 win against Washington, and Deonte Harris, who caught a 72-yard scoring pass from Jameis Winston, left with a hamstring injury.

Washington also lost multiple players. Wide receiver Curtis Samuel’s lingering groin injury that caused him to miss the first three games of the season knocked him out after being targeted once by Taylor Heinicke. Rookie right tackle Sam Cosmi injured his left ankle, attempted to return later but then aggravated it, limped off and was ruled out for the rest of the game. Cornerback Darryl Roberts left with a quadriceps injury.

In a potentially huge loss for Jacksonville, center Brandon Linder was carted to the locker room with what appeared to be a significant leg injury during a 37-19 loss to Tennessee. Linebackers Myles Jack (back) and Dakota Allen (shoulder) also were injured in the Jags’ 20th straight loss.

Pittsburgh Steelers wide receiver JuJu Smith-Schuster went to a hospital with a shoulder injury sustained while getting tackled following a 3-yard gain on an end-around in the second quarter of a 27-19 win against Denver. Inside linebacker Devin Bush left in the third quarter with an unspecified leg injury.