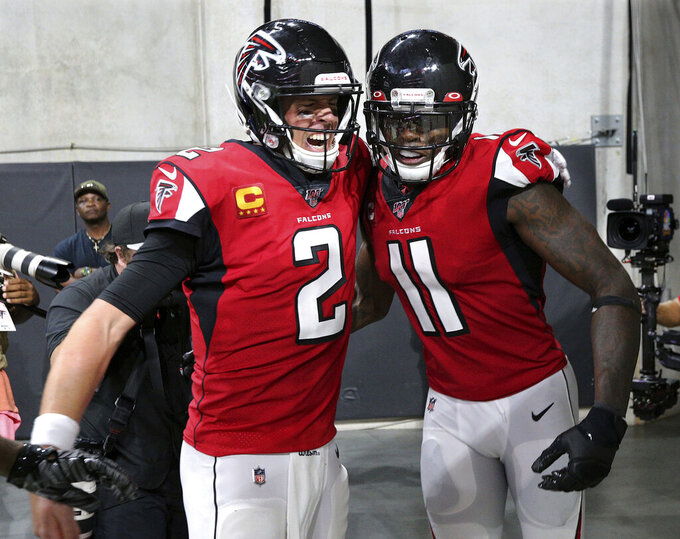 ATLANTA (AP) — Julio Jones hauled in a short pass behind the line of scrimmage, got the blocks he needed and didn't stop running until he was well past the end zone.

The Philadelphia Eagles never had a chance.

In the blink of an eye, Jones turned a fourth-down screen pass into a 54-yard touchdown with 2:10 remaining Sunday night. The Atlanta Falcons surrendered a huge play of their own on fourth down but came up with the defensive stop they needed to preserve a wild 24-20 victory.

Jones' speed on the winning play was stunning, reaching an estimated 20 mph as he glided away from a futile swipe by Rodney McLeod and left Andrew Sendejo far behind.

"OK, it's a footrace now," Jones said. "That was it. It really wasn't like I had to try hard or anything like that. I just had to stay on course."

A sluggish game turned thrilling in the final minutes. The Falcons (1-1) squandered a 17-6 lead against an injury plagued team that lost two of its top receivers, falling behind for the first time when Carson Wentz dove over from the 1 with 3:13 left and then connected on a two-point conversion pass to give the Eagles a 20-17 edge.

Philadelphia (1-1) had a chance at the end when Wentz converted on fourth-and-14, somehow getting off a pass with a rusher in his chest that Nelson Agholor hauled in between Keanu Neal and Ricardo Allen for a 43-yard completion to the Falcons 18.

But Neal and Isaiah Oliver dragged down Zach Ertz less than a yard short of the marker on another fourth-down play inside the 10 to preserve a much-needed victory for Atlanta after a dismal performance in the season opener at Minnesota.

It was Jones who really bailed out the Falcons — and became the franchise's career leader in receiving yards with his winning score, passing Roddy White.

"He's had a lot of great ones, that's for sure," said quarterback Matt Ryan, who helped keep Philadelphia in the game with three interceptions. "It's special for him to break a record that way, in such a critical situation, in such a clutch moment. That's pretty cool."

On fourth-and-3 at the Falcons 46, Jones dropped behind the line to haul in Ryan's short pass and got just enough of a pick from fellow receiver Mohamed Sanu to take out cornerback Rasul Douglas. Left tackle Jake Matthews squashed another defender with a crunching block out on the edge.

Jones crossed over the goal line and kept right on going, disappearing down the tunnel. He finished with five catches for 106 yards and two touchdowns, also hauling in a 4-yard score that gave the Falcons their 11-point lead early in the third quarter.

The Eagles were hampered by injuries that took out receivers DeSean Jackson (groin) and Alshon Jeffery (calf), forcing them to go with backups Mack Hollins and J.J. Arcega-Whiteside much of the game.

'It was tough," Wentz said. "Some of the stuff tonight you can't make up. I've never seen guy after guy like that early in the ballgame, but guys stepped up. Guys were resilient. We came up a little short today, but I'm proud of the way the guys fought."

Wentz and the short-handed offense finally got going in the fourth quarter, completing eight straight passes for 72 yards on a drive that culminated with a quarterback sneak for the go-ahead touchdown. He finished 25 of 43 for 231 yards with two interceptions.

"What a game he had," Agholor said. "That's one of the best performances I've seen from our quarterback, man. He's very resilient, getting the ball to everybody."

Ryan was 27 of 43 for 320 yards and three touchdowns, giving him 300 TD passes in his career. He is tied with John Elway for 11th place on the NFL's career list.

Atlanta's Calvin Ridley had the second 100 -yard receiving game of his career, hauling in eight passes for 105 yards including a 34-yard TD.

With Jackson and Jeffery sidelined, Agholor stepped up to make eight catches for 107 yards and a TD.

But he let a potential go-ahead score slip through his hands with under 2 minutes to go after breaking free down the left sideline.

Agholor lost the ball in the lights of the retractable-roof stadium but said, "I've still got to make that play. That's something we prepared for in pregame."

Falcons rookie Kaleb McGary missed a good portion of the game after being helped off the field with a left knee injury.

The offensive tackle went down near the midway point of the second quarter while protecting on a pass play but was able to return in the fourth quarter.

Philadelphia lost another player before the game even began.

Dallas Goedert sustained a calf injury, apparently in pregame in warmups, which left Ertz as the Eagles' only tight end.

Philadelphia returns home next Sunday to host the Detroit Lions in the first meeting between the teams since 2016.

The Falcons hit the road to face Indianapolis, which has won 14 of 16 meetings between the teams.