Julio Jones in coach mode for start of Falcons' minicamp 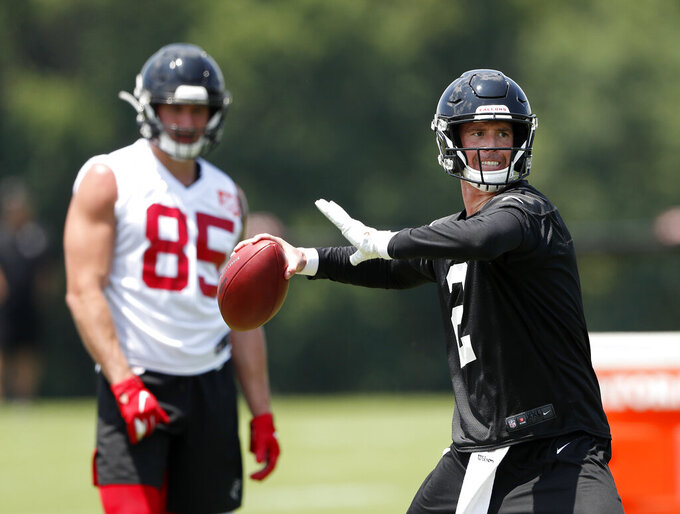 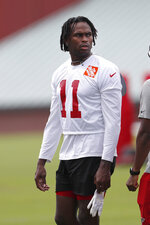 FLOWERY BRANCH, Ga. (AP) — Julio Jones left his helmet inside and wore a floppy hat to the opening day of the Atlanta Falcons' three-day minicamp.

As he prepares for his ninth season, Jones was in player-coach mode on Tuesday as he made mental notes to pass on to younger teammates.

For the Falcons, the biggest news was the wide receiver reported, one year after he missed the mandatory minicamp.

Last year he had the approval of coach Dan Quinn to work on his own. Jones has continued to set his own workout pace this offseason. He missed the voluntary organized team activities (OTAs) while making sure he is healthy for training camp.

Jones, 30, called his schedule the "same thing" as last offseason.

"I'm just taking it slow," he said. "A little maintenance work. Just taking it slow for me. Not really trying to jump in and get in the swing of things right now. I'm a veteran. I've been doing it for a while."

Jones said he knows how "to get better and be where I need to be when the season comes around."

The difference from 2018 is Jones can be a better leader when he is in minicamp, if only as an observer.

"He is the type of player who enjoys the mentor side of it and he takes that responsibility seriously to help the group and others, not just the wide receiver group," Quinn said.

Jones' leadership role was an appropriate topic on the day his mentor, former Falcons wide receiver Roddy White, was announced as the 11th player to be inducted into the Falcons Ring of Honor. The ceremony has been planned for the Dec. 8 game against Carolina.

White, who retired after the 2015 season, was a four-time Pro Bowl selection in his 11 years with the team and a first-team All-Pro in 2010. White's franchise records for TD catches and yards receiving are being challenged by Jones.

"Roddy mentored me," Jones said. "... He didn't shy away from helping me out. You've got to understand we want to win. You can't win by hiding things from younger guys."

Despite frequent problems with injuries that force him to miss practice, Jones has not missed a game the past two seasons. He was in top form in 2018 , when he had 113 catches and led the NFL with 1,677 yards receiving. He had eight touchdown catches.

Falcons owner Arthur Blank has said he wants Jones to play his entire career in Atlanta. There are ongoing talks about a new deal for Jones, who has two years remaining on his five-year, $71.5 million contract. His 2019 base salary under his current deal is $9.6 million, far below contracts given to other top wide receivers.

NOTES: DT Grady Jarrett, OLB Vic Beasley Jr. and LB Deion Jones also did not participate in OTAs. Each reported Tuesday. Jarrett has signed his $15.209 million franchise tag and he wouldn't comment on chances he will remain in Atlanta after the 2019 season. The Falcons have until July 15 to sign Jarrett to a long-term deal. ... Quinn said that all players still recovering from injuries or, like Jones, held out on Tuesday as a precaution, are expected to be ready for training camp.