Julio Jones still waiting on a new contract with Falcons 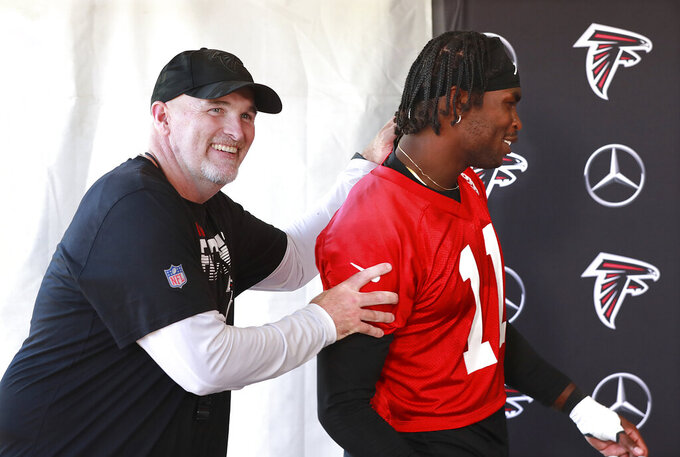 FLOWERY BRANCH, Ga. (AP) — Julio Jones is using the same approach he took at the start of training camp last year: report on time and wait for the Atlanta Falcons to offer a better contract.

Jones, a two-time All-Pro and six-time Pro Bowl receiver, expects to rank among the highest-paid players at his position before too much longer.

A five-year deal he signed in August 2015 included $47 million in total guarantees, but that deal is so outdated that it ranks Jones, one of the NFL's most consistently productive players, 12th among receivers. The Falcons bumped his salary a modest $2.9 million last year with the assurance that another lucrative, long-term deal would be in place before the start of this season.

Jones, who ranks fifth among active players with 698 career catches and 10,731 yards receiving, told The Associated Press on Wednesday that he wants to be a Falcon for life.

Jones indicated he's not concerned with eclipsing Cleveland's Odell Beckham Jr. as the NFL's highest-paid receiver. He just wants a deal that matches his value.

"I want to be the best teammate I can possibly be no matter where I'm at and the type of person that when you see me you say, 'I enjoyed playing with that guy. I had a great time with that person,' " he said. "More than all this other stuff that everybody gets all caught up in. Contract talk, things like this — I just love the game of football in general."

Jones brushed aside a question from a reporter that he already has a deal in place and is waiting to meet the Collective Bargaining Agreement mandate that he must wait a full year signing a new contract.

"I don't care about what anybody else thinks or whatever we've got going on," he said. "We're together here. We talk among each other. In-house stays in-house. You don't go outside of that. So if somebody else has any type of information, it has to be false because whatever we talk about is confidential."

Regardless of his financial timetable, Jones isn't expected to return to full speed on the field for another 10 days to two weeks. He has run a few routes for quarterback Matt Ryan but has mostly worked on the side with trainers as he nurses a sore foot.

Jones took no snaps in preseason last year after playing through a hip flexor, a back injury and an ankle injury in 2017. It had no effect once the games began as he finished with a league-best 1,677 yards receiving.

"I don't want to chance anything since I've been just taking my time to get back in the swing of things, but I'll be ready to go," he said. "Like I said, we have a plan in place. Nobody, not me, not (coach Dan Quinn), is really forcing something like 'I really need you to do this, I need you to do that.' I'm in the classroom. I'm studying. I'm helping the young guys. I'm getting my reps. I'm getting better every day working, working, working."