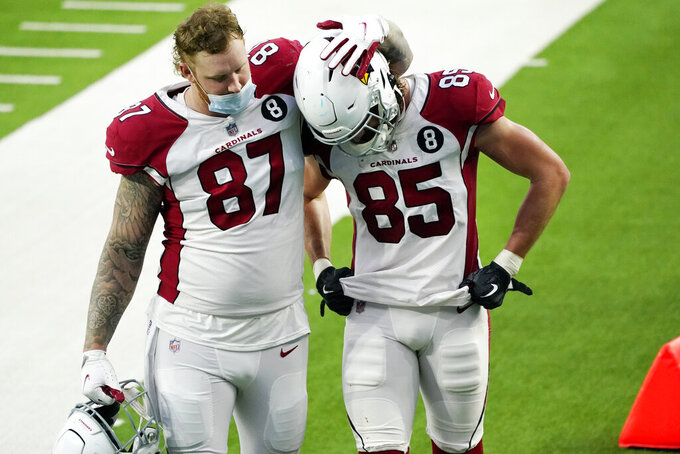 GLENDALE, Ariz. (AP) — Cardinals coach Kliff Kingsbury was an offensive genius a few short weeks ago. Now there's a sizable chunk of Arizona's fan base that wouldn't mind if he was out of a job.

Barring something very unexpected, that's not going to happen. But there's little doubt the 41-year-old Kingsbury will enter his third season under pressure after a late-season collapse extended the franchise's playoff drought to five years.

Arizona finished with an 8-8 record, which was a three-win improvement over the previous season. The problem is the Cardinals raised expectations with a 6-3 start and then fell apart down the stretch. The last two weeks were downright painful: Arizona lost two games when playing against backup quarterbacks and scored a combined 19 points.

Kingsbury said on Monday that the season “obviously didn't end the way we wanted it to” but remains optimistic that the frustration of falling just shy of the playoffs will make the franchise stronger in 2021.

“I think they're all learning experiences,” Kingsbury said. “As a staff, as players, we have to get better in those moments and those opportunities. There's no question. We all know we had two opportunities late, the last two games, to have a chance to make the playoffs and we didn't take advantage of them.

"Those are things we've got to work on, work through, and you learn through some of your failures.”

But the failures must turn into success soon. Quarterback Kyler Murray will be entering his third season and the Cardinals what to take advantage of building around him while he's still on his rookie contract and fairly inexpensive.

The 2019 top overall pick had an encouraging second season, throwing for 3,971 yards, 26 touchdowns and 12 interceptions. He also ran for 819 yards and 11 touchdowns.

Murray suffered an ankle injury on Sunday against the Rams and missed a big chunk of the game. He returned but couldn't rally the Cardinals, who were held to a season-low in points in the 18-7 loss that kept them out of the postseason.

“We just have to be better in all phases,” Murray said. “I hope this motivates us as an organization. It’s an ugly feeling and nobody wants to feel like this, especially when we’ve all talked about it. We’ve kind of shot ourselves in the foot. I feel like we should already be in the playoffs, but we’re not.”

It's become an offseason staple for the Cardinals over the past few years: They're waiting for word if veteran receiver Larry Fitzgerald will return for another season.

The 37-year-old is one of the most productive receivers in NFL history and beloved in the desert, where he's easily the most popular player since the franchise moved to Arizona in the 1988. His production has tailed off in recent seasons and he finished with a career low in catches (54), yards receiving (409) and touchdowns (1), but he's still useful for making tough catches in traffic and for his blocking.

He missed two games earlier this season after a bout with COVID-19 and didn't play in the season finale because of a groin injury.

Kingsbury and teammates have made it clear they want Fitzgerald to return. The receiver has several interests outside of football, including being a part owner of the NBA's Phoenix Suns.

“That's tough to even think about,” Arizona left tackle D.J. Humphries said. “I don't even want to think about it. But he's put himself in position to be able to write his future however he wants it to go. Everyone will respect it. But it's hard to wrap your head around him not being in this building.”

The Cardinals have to decide whether to bring back several big contributors, including three-time All-Pro cornerback Patrick Peterson, running back Kenyan Drake and linebacker Haason Reddick.

Peterson will be 31 years old in July. He had three interceptions and other good moments in 2020, but teams also weren't afraid to challenge him.

“I love Patrick Peterson, he knows that,” Kingsbury said. “We’ll see where that all goes.”

Drake, who will be 27 this month, ran for a career-high 955 yards and 10 touchdowns. He tailed off down the stretch and averaged just 4 yards per carry.

The 26-year-old Reddick had a breakout season with 12 1/2 sacks, 15 tackles for loss and 16 quarterback hits. Arizona would love to have him back, but there's little doubt he'll command serious money in free agency.

It's fair to wonder if NFL defenses are starting to figure out how to slow down Kingsbury's “Air Raid" offense.

The Cardinals topped 400 total yards in seven games during their 6-3 start and were particularly effective on the ground. During their seven-game slide to end the season, they topped 400 yards once.

The Cardinals made one of the biggest moves of the offseason when they added three-time All-Pro receiver DeAndre Hopkins in a trade that sent running back David Johnson back to the Houston Texans.

It's safe to say that's worked out well for Arizona.

Hopkins tied a career high with 115 catches and had 1,407 yards receiving and six touchdowns. He was also part of one of the most spectacular moments of the regular season when he jumped over three Buffalo Bills with 2 seconds left to secure a touchdown and a 32-30 win.