The Latest: RB Aaron Jones having career day for Packers 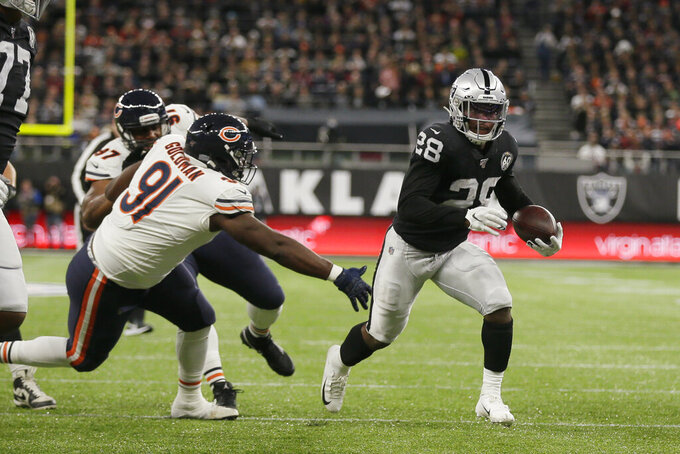 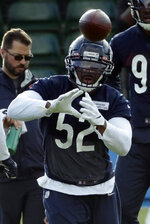 The Latest on NFL Week 5 (all times EDT)

Green Bay running back Aaron Jones keeps building on a career day at the Dallas Cowboys.

Jones has four touchdowns rushing, already two more than his career high with time remaining in the third quarter, to help the Packers build a 31-3 lead.

The third-year back was coming off consecutive games with 19 and 21 yards rushing. He already had more than 100 scrimmage yards before halftime with 114, 66 rushing and 48 receiving. Jones was closing in on his career high of 172 scrimmage yards.

Jones grew up in El Paso in far West Texas and went to his hometown school at UTEP.

Broncos cornerback De'Vante Bausby has been strapped to a backboard and taken off the field on a cart in the second quarter of Denver's game against the Los Angeles Chargers.

Bausby was hurt when he collided with Denver teammate Alexander Johnson while making a tackle on the Chargers' Austin Ekeler.

The defensive back didn't appear to be moving, but appeared to be talking to trainers while they helped him.

Several Broncos knelt around Bausby while he was aided.

The third-year NFL pro signed with Denver in April. He made 11 tackles in the Broncos' first four games.

Christian McCaffrey is having a special day for the Carolina Panthers.

McCaffrey is currently on pace for 2,764 yards this season, which would shatter the NFL record set by Tennessee's Chris Johnson in 2009 (2,509).

Teddy Bridgewater has thrown for a fourth touchdown against the Buccaneers beleaguered secondary to give New Orleans a 31-17 lead in the fourth quarter.

The Saints are finding all kinds of ways to pass against the Bucs. During their latest scoring drive, running back Alvin Kamara completed a 13-yard, first down pass to tight end Josh Hill. Earlier in the game, reserve QB Taysom Hill completed an 18 yard pass to star receiver Michael Thomas. Bridgewater, meanwhile, has a season high 300 yards passing as he looks to go 3-0 as a starter in place of the injured Drew Brees.

New England's 42-year-old star passed Brett Favre, who compiled 71,838 yards with three teams. Brady surpassed that total in the third quarter against the Redskins on a 15-yard pass to Julian Edelman. That gave Brady 271 yards in the game and 71,846 over his brilliant career.

Giants wide receiver Sterling Shepard was asked to leave the field with 4:04 left in the third quarter to be evaluated for a concussion.

He was shaken up falling to the ground trying to make a catch. He looked woozy. Shepard sustained a concussion in the season opener against Dallas and didn't tell anyone nor was it noticed.

Pittsburgh Steelers quarterback Mason Rudolph left in the third quarter during Sunday's game against Baltimore after taking a hit to the head from Ravens safety Earl Thomas.

Rudolph had just released a pass to teammate James Washington when Thomas hit Rudolph in the chin. The quarterback fell to the Heinz Field turn and lay motionless on the turf. Thomas was flagged for roughing the passer on the play.

Rudolph was able to walk off the field after several minutes after trainers cut off his face mask. He was replaced by backup Devlin Hodges with the Steelers trailing 17-13.

Philadelphia Eagles running back and punt returner Darren Sproles moved past Tim Brown into fifth place on the NFL's all-time list for all-purpose yards with a 4-yard return on a punt in the third quarter against the Jets.

They join former linebacker Sam Mills and former team president Mike McCormack as the only members of the Hall of Honor in the team's 25-year history.

Smith received the biggest ovation and during his speech said he never thought he would be able to wear the Panthers' No. 89 jersey again after being released late in his career. Smith then paused and peeled off his ceremonial Panthers blue jacket to reveal he was wearing his No. 89 jersey underneath, sending the crowd into hysterics. Smith then turned to Panthers owner David Tepper and said "make sure nobody wears that jersey again."

Delhomme called it the greatest sporting day of his life and said "Nothing can be finer than to be in Carolina."

The New York Giants have lost another running back.

Wayne Gallman, who starting for the injured Saquon Barkley, has been knocked out of the Giants' game the Minnesota Vikings with a concussion.

Rookie Jon Hilliman, the Rutgers rookie who spent the first three weeks on the practice squad, has replaced Gallman. He apparently was hurt at the end of an 11-yard run in the first quarter.

The Giants came into the game with three running backs. Eli Penny is the other. He has been used as a blocker mostly with the Giants.

Barkley sustained a high sprain to his right ankle against the Tampa Bay Buccaneers on Sept. 15. He practiced on a limited basis on Friday but was ruled out.

The Oakland Raiders are dominating the Chicago Bears at halftime in London.

Oakland has taken a 17-0 lead thanks to TD runs by Josh Jacobs and DeAndre Washington and have outgained Chicago 208-44 at the break. This matches Oakland's biggest lead at any point in a game since coach Jon Gruden returned last season.

The Raiders have controlled the matchup against their former star edge rusher Khalil Mack by rushing for 99 yards and allowing no sacks.

Oakland has three sacks of its own against backup quarterback Chase Daniel.

The performance might leave the Bears questioning their decision to arrive in London only two days before the game. The Raiders spent the entire week here.

Officials have ejected Tampa Bay starting cornerback Carlton Davis from Sunday's game against New Orleans because of a heavy, blind hit to the helmet of tight end Jared Cook.

Davis was assessed a 15-yard personal foul for the play and after a short delay the hit was judged to have been flagrant enough to warrant an ejection. The decision, coming in a 10-10 game in the second quarter, thinned the ranks of a Tampa Bay defensive backfield that entered the game ranked second to last in the NFL against the pass.

The Saints have ended a streak of 13 possessions without a touchdown and taken a 10-7 lead over Tampa Bay in the process.

Saints quarterback Teddy Bridgewater, starting his third straight game for the injured Drew Brees, found Michael Thomas for a 14-yard catch and run to the left pylon for the score.

In Week 4, the Saints beat Dallas, 12-10, with four field goals. The Saints hadn't scored a TD since their second-to-last possession of a victory at Seattle in Week 3.

Bridgewater also has had his first completion longer that 30 yards this season against the Bucs, also to Thomas, who has five catches for 94 yards before the midway point of the second quarter.

Giants running back Wayne Gallman is being evaluated for a concussion in the first quarter of New York's matchup with Minnesota.

Gallman started in place of injured starter Saquon Barkley (ankle), who is out for the second straight week. Gallman's injury leaves rookie Jon Hilliman to carry the load in the running game. Eli Penny is the other option with Barkley out

The winless Redskins have taken an early 7-6 lead over the unbeaten New England Patriots.

Wide receiver Steven Sims Jr. ran for a 65-yard touchdown on an end-around the right side. Washington has Colt McCoy at quarterback, who's seeing his first action since breaking his leg against Philadelphia last December. McCoy was sacked to end the Redskins' first possession, and Tom Brady was sacked to end New England's opening drive.

The Patriots quickly responded with a six-play, 75-yard drive capped by a 6-yard touchdown pass from Brady to Julian Edelman. But veteran kicker Mike Nugent, signed this week after Stephen Gostkowski was placed on injured reserve, missed the extra point wide right.

Josh Allen is back and starting for the Buffalo Bills.

The quarterback was in the concussion protocol after a helmet-to-helmet hit early in the fourth quarter of a 16-10 loss to New England last weekend. He was a limited participant in practice Wednesday and Thursday before practicing fully on Friday, when Buffalo listed his status as questionable.

Allen has rallied the Bills from deficits in each of their three victories this season. Turnovers have been an issue. The second-year starter has thrown six interceptions and lost two fumbles.

He completed both passes on the Bills' opening drive for 23 yards. But he scrambled on third down and was sacked forcing Buffalo to punt.

Khalil Mack went all the way to Europe for a chance to sack his former teammate Derek Carr as the NFL kicks off the first of four games in London.

Mack and the Bears (3-1) enter Week 5 tied for first in the NFC South while the Raiders (2-2) are tied for second in the AFC West. Mack faces the Raiders at Tottenham Hotspur Stadium 13 months after being traded to Chicago following a contract dispute.

Next Sunday, NFC South rivals Carolina and Tampa Bay will also play at Tottenham. It's already their second meeting of the season after the Buccaneers beat the Panthers 20-14 on Thursday night in Week 2.

In Week 8, Bengals head coach Zac Taylor, the former quarterbacks coach for the Rams, will lead Cincinnati as it faces the NFC champions in Wembley Stadium.

And in Week 9, the London games conclude as Houston plays its first game in London in an AFC South matchup against Jacksonville, which will be playing its seventh annual "home" game in the city. This will also be the second matchup of the season for the teams. Houston won the first meeting 13-12 in Week 2 as the Jaguars failed on a late 2-point conversion attempt.

By Teresa M. Walker 3 hrs ago
By Steve Megargee 10 hrs ago
By David Brandt 11 hrs ago
By Mark Anderson 12 hrs ago
By Joe Reedy 13 hrs ago