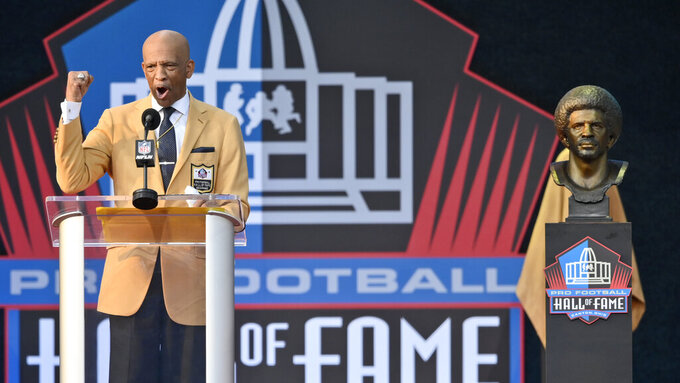 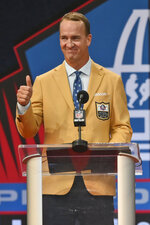 CANTON, Ohio (AP) — The Latest on the Pro Football Hall of Fame inductions:

For 18 seasons, whether playing cornerback or safety, Charles Woodson was as dependable as they come.

And now he has been inducted into the Pro Football Hall of Fame.

The 1998 Defensive Rookie of the Year with Oakland who won Defensive Player of the Year honors 11 years later as a Packer, Woodson never cared where he played as long as he was on the field.

Wherever he was, as Aaron Rodgers said, Woodson “understood his craft” perfectly.

Woodson, who spent 11 seasons with the Raiders and seven with Green Bay, where he won a Super Bowl, had 65 interceptions and also was a dynamic punt returner.

In a emotionally charged speech, Woodson cited his family — mother, father, brothers, sister, wife, children — and told them, “Without you, I'm not here.”

“Football is what I did, but these people I mentioned are who I am. Build your legend.

Alan Faneca overcame bouts with epilepsy to become one of the premier offensive linemen in the NFL. He’s now been inducted into the Pro Football Hall of Fame.

A six-time All-Pro with Pittsburgh in his 10 seasons there, he also was a lead blocker and locker room presence for the Jets for two years. Faneca completed his stellar career with one season in Arizona.

Faneca, who won a Super Bowl with the Steelers, takes daily pills to deal with his condition and has not had a seizure in about eight years.

“Instinctively I knew I was not going to allow anything to prevent me from fulfilling my dream,” he said. “Epilepsy is part of me, but that does not define me. We are in charge of our destiny.”

A regular finalist recently for the hall, he saw fellow offensive linemen Kevin Mawae and Steve Hutchinson precede him into the Canton shrine before getting the nod.

The guy called Megatron once had an unenviable nickname: Butterfingers.

Calvin Johnson certainly outgrew his penchant for dropping the ball, becoming one of the NFL’s most productive receivers. He has been inducted into the Pro Football Hall of Fame.

Johnson spent nine seasons with the Lions, and Detroit made the playoffs only twice. Indeed, Johnson suffered through an 0-16 season, yet led the league with 12 touchdown catches and had 1,331 yards for a 17.1 average.

Johnson finished his nine-year career with 731 receptions for 11,619 yards and 83 TDs. Those numbers, and the impact he had on the sport made him a first-year eligible selection for the hall.

Stressing how much pain he was in throughout his career, Johnson said he still “made up my mind I'd be the most dominant receiver in the NFL.” He accepted the nickname given to him by fellow receiver Roy Williams, pinpointing his second pro season as when “the Megatron mindset was born.”

John Lynch hadn’t quite given up on making the Pro Football Hall of Fame. Still, when David Baker, the hall’s president, came knocking on his door to tell Lynch that after seven years of being a finalist that Lynch had been voted in, the former safety admitted he nearly fell to his knees.

Lynch, who won a Super Bowl in Tampa Bay and also starred with Denver for four seasons after 11 with the Bucs, has been inducted into the hall.

Playing both strong and free safety, Lynch was a key to the Tampa-2 defense, a “coach on the field” according to his former coach, Tony Dungy, and one of the surest tackler the NFL has seen. Now the general manager of the 49ers, Lynch made nine Pro Bowls as a player.

“What a privilege to be inducted in this brotherhood,” Lynch said. “It takes a lot of belief to get to this stage. However, belief has to be nurtured time and time again.

“One person can make a difference. I encourage each and every one of you to be that person.”

Peyton Manning, the record-setting quarterback who won Super Bowls for Indianapolis and Denver — and five, yes, five, MVP awards — has been inducted into the Pro Football Hall of Fame.

The seven-time All-Pro considered among the headiest and resourceful players in league history was a slam-dunk choice for the hall in his first year of eligibility. In his 18 NFL seasons, Manning was a measuring stick at the position, and the first QB to win Super Bowls with two franchises.

The son of college football great Archie Manning and brother of former Giants QB (and two-time Super Bowl winner) Eli Manning, Peyton was the top overall draft choice in 1998 and, by the next year was establishing himself as an NFL force. He led the league in touchdown passes four times, including a phenomenal 55 in 2013 for the Broncos.

“I don't know about you but I will never be done with this game.” said Manning, who earlier stood at the podium and nodded and smiled while his ovation went on. He then joked about how short the length of the limited speeches are this year, mentioning that Ray Lewis just concluded his speech “which began in 2018.”

Thrilled to be entering the hall on the same weekend as “one of my favorite teammates, Edgerrin James,” Manning also urged anyone involved in the NFL to “ignite the future of the sport. If not, we are not doing football justice. It is about nurturing football to live another day, another year ... The future of this game is ours to shape."

The first man to win Super Bowls as a player, assistant coach and head coach, Tom Flores has been inducted into the Pro Football Hall of Fame.

Flores was a backup quarterback for the Chiefs in the fourth Super Bowl, a Raiders assistant to John Madden in the ninth, and head coach when the Raiders won the 15th and 18th games.

Despite the chaos surrounding the Raiders as owner Al Davis filed lawsuits against the NFL, Flores kept the ship afloat. And more: his overall record against Hall of Fame coaches Don Shula, Bill Walsh, Chuck Noll and Tom Landry was 12-4.

Flores, of Mexican descent, long ago became a hero to the Latino community, a symbol of success on and off the field.

Explaining to the crowd — which shouted “Raiders” as he rose from his wheelchair and also when he stood at the podium — why he was scheduled second to speak, Flores said “I'm 84 years old, I go to bed at 9 o'clock. Where's my pillow?”

“Being at this enshrinement,” he added, “means the world to me.”

Drew Pearson likely figured it would take a Hail Mary for him to get into the Pro Football Hall of Fame.

Nope. Pearson has been inducted into the shrine as a senior member.

The former standout receiver for Dallas from 1973-83 was a three-time All-Pro who made the NFL’s 1970s All-Decade Team. He was the only position player from that squad not in the hall.

Pearson, of course, caught Roger Staubach’s winning touchdown pass in a 1975 playoff game at Minnesota that is considered the original Hail Mary. But he should be recognized for 557 catches, including postseason, for nearly 9,000 yards and 56 touchdowns.

“This confirms it,” Pearson said after noting his bust's hairdo. "I had the biggest Afro in NFL history.

“The wait is over. How about that! A tough long journey on the road less traveled."

Bill Nunn, who was recognized posthumously in April from the contributors, will be featured in a video tribute.

By Maryclaire Dale 21 minutes ago
By John Wawrow an hour ago
By W.g. Ramirez 5 hrs ago
By Noah Trister 12 hrs ago
By Kyle Hightower 13 hrs ago