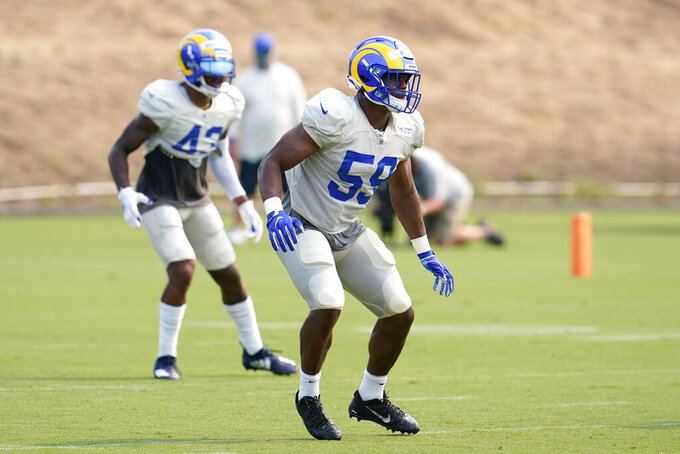 FILE - In this Aug. 18, 2020, file photo, Los Angeles Rams linebacker Micah Kiser (59) takes part in the NFL football team's training camp in Thousand Oaks, Calif. Kiser is bouncing back from a season-ending pectoral injury during the 2019 preseason with a strong effort in training camp. He looks like a favorite in a four-man derby for two starting jobs at inside linebacker and the chance to replace leading tackler Cory Littleton, who left for Las Vegas as a free agent. (AP Photo/Marcio Jose Sanchez, File)

THOUSAND OAKS, Calif. (AP) — During the Los Angeles Rams' training camp one year ago, Micah Kiser was a fifth-round pick who had barely played as a rookie. The young linebacker knew he had to make a big impression in August, and he was well on his way to winning more playing time, perhaps even a starting job.

And then his left pectoral muscle completely tore off the bone while he made an ordinary preseason tackle against the Dallas Cowboys.

Kiser felt searing pain, but his determination overrode his common sense for a moment. He stayed in the game for several most snaps and only reported his injury to the training staff after the defense got a stop.

“I was like, 'I’m not trying to waste this opportunity,” Kiser said. “They were going to have to pull me out of the game for me to come out. I was ready to go out on my shield.”

The injury was season-ending, but Kiser had done enough to keep the Rams' attention. One year later, he looks like a favorite in a four-man derby for two starting jobs at inside linebacker and the chance to effectively replace leading tackler Cory Littleton, who left for Las Vegas as a free agent.

“You see the instincts, you see the awareness,” coach Sean McVay said of Kiser. “Great communication ability. He’s been attacking the football. ... His feel for the game, he’s got an innate feel. Football makes sense to him, and it’s been good to see him out here healthy, and we’re optimistic that he’s going to be a big contributor this year.”

Filling Littleton's always-moving shoes is a tough assignment, but recovering from a badly torn chest muscle is no picnic, either. Kiser, who led the ACC in tackles three times at Virginia, feels capable of just about anything after surviving that setback.

“I guess the easiest thing was just to feel sorry for myself,” Kiser said. “It took a while to get over that, honestly. Going to the games was really tough, knowing like, man, I wish I can be out there, and just not really being in the thick of it, not really being in the foxhole. That’s the kind of guy I am. (I was) just trying to get over the feeling of feeling down on myself and feeling sorry for myself.”

Kiser did it in part by spending time with Carrie Hastings, the Rams' sports psychologist. His five-month physical recovery wrapped up near the end of the Rams' 9-7 season, and he worked out obsessively alongside his girlfriend during the months of coronavirus quarantine, cutting weight for the season well before training camp began.

The cap-strapped Rams elected not to sign any veteran inside linebackers in free agency, deciding to replace Littleton and Clay Matthews, who started 13 games before getting cut, with the prospects already in the building. Kiser is competing with Travin Howard, Kenny Young and Troy Reeder for two starting spots.

The wisdom of the Rams' strategy will depend solely on how well Kiser and his fellow competitors perform, since linebacker can be a difficult position at which to identify quality NFL contributors. Just look at Littleton, an undrafted free agent from Washington who grew into a pillar of LA's defense.

Reeder started eight games last season, while Young and Howard played as backups and on special teams. The Rams couldn’t afford to keep Littleton, but they also dropped Matthews and Bryce Hager, who started four games last year before a season-ending shoulder injury.

McVay and new defensive coordinator Brandon Staley have been careful not to name favorites in this competition, perhaps because they didn't have any.

“There is a group of guys there that have not played a lot of football in the NFL,” Staley said. “I think that we are optimistic about who they are as competitors, who they are as people.”

This green group of remaining inside linebackers still has the confidence of the rest of the Rams' defense.

“You say that there’s a lack of experience, but Micah Kiser, he has the all-time ACC record in tackles or something like that,” said Rams safety John Johnson, who played in the ACC for Boston College while Kiser was at Virginia. “If we’re on the same page, I know we’ll have success.”