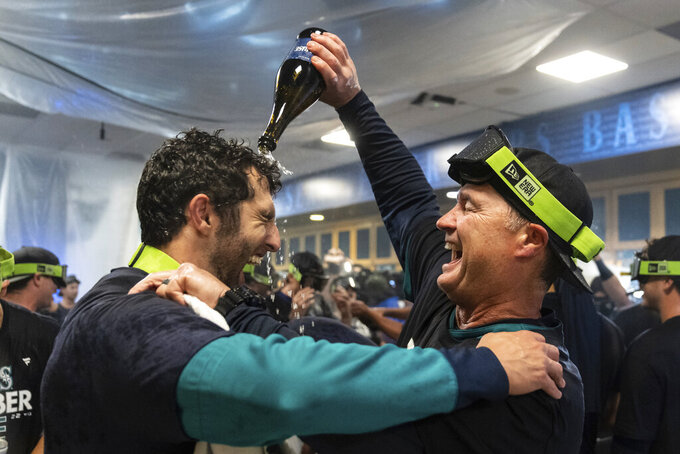 Seattle Mariners manager Scott Servais, right, celebrates in the clubhouse after the team's baseball game against the Oakland Athletics, Friday, Sept. 30, 2022, in Seattle. The Mariners won 2-1 to clinch a spot in the playoffs. (AP Photo/Stephen Brashear)

SEATTLE (AP) — Because of one stat, pitcher Matthew Boyd has become the go-to player to ask about the Seattle Mariners' situation.

Not the stats on the back of his baseball card, mind you. It's the fact Boyd was born in Bellevue, Washington, on Feb. 2, 1991. That he grew up on nearby Mercer Island and was 10 years old the last time Seattle reached the postseason.

“I was really lucky to have really good baseball teams at a point in my life where it was kind of those transformative years,” Boyd said. “I just wanted to watch the game on TV. I wanted to go to the Kingdome every day. That was really special. It was huge for me. I’m very lucky that was the case because baseball was fun.”

Baseball is fun again in the Pacific Northwest in a way that it hasn’t been in more than two decades. The longest postseason drought in the four major professional sports ended Friday night when the Mariners earned a long-coveted spot in the Major League Baseball playoffs.

And Seattle did it in the most dramatic fashion possible. Cal Raleigh, sent to the minors because of struggles early in the season, stepped up as a pinch-hitter and launched a game-winning solo home run with two outs in the ninth inning on a 3-2 pitch to beat the Oakland Athletics 2-1.

It was storybook stuff, played out by kids in backyards for generations. And it joins a small list of singular, unforgettable moments — a shot, a play, a swing — in Seattle's sports history.

“It was the craziest thing ever. I don't think I'll be able to forget that moment,” Raleigh said.

Seattle will play in the wild-card round, potentially as the beneficiary of the postseason expansion that added a third wild-card team for each league. Toronto and Tampa Bay have clinched the other two extra spots in the AL, and the playoff schedule has yet to be set.

But the path hardly matters to fans, who if they were born the last time Seattle made the playoffs are now legally old enough to buy an alcoholic beverage to celebrate the return.

That includes Boyd, who was acquired by his hometown team at the trade deadline.

“The thing about Seattle, Seattle loves baseball and really it’s a baseball city,” Boyd said. “Recently the focus has been on the Seahawks because of their great success, but when you have a winner it’s really cool to see the energy and the fans come out in droves.”

Seattle fans last saw their team play a postseason game on Oct. 22, 2001, when the Mariners lost to the New York Yankees in Game 5 of the AL Championship Series. So 7,656 days will have passed for them by next Friday, when the AL wild-card playoffs begin.

The last time the Mariners had a playoff game, Tom Brady had made four career starts. Blockbuster Video still had more than 5,000 stores nationwide. Michael Jordan was about to begin a two-year addendum to his career with the Washington Wizards.

That long drought has made Seattle a woebegone franchise, the butt of jokes. The Mariners still remain the only team never to reach the World Series despite rosters that included the likes of Ken Griffey Jr., Randy Johnson, Alex Rodriguez and Edgar Martinez.

Manager Scott Servais seems set that this can be a team to end that piece of trivia, too.

"I know everyone is exhausted. ‘End the drought. End the drought.’ I’ve heard it for seven years,” Servais said. “Every day when I get up and drive to work that’s what’s been on my mind. The goal is to win a World Series, not just end the drought.”

Ichiro Suzuki played in 1,861 career regular-season games for the Mariners and just 10 playoff games, all during his first season. Franchise cornerstones Felix Hernandez and Kyle Seager never saw playoff baseball after spending most or all of their career with the Mariners.

All the moves that were supposed to push Seattle over the top at various times during the two decades never equated to a playoff berth.

Adrian Beltre, Richie Sexson, Cliff Lee, Erik Bedard, Chone Figgins, Robinson Cano and Nelson Cruz were all brought in at some point over the past two decades with the belief they could be the difference. And while Seattle got close on several occasions, an entire generation of fans missed the postseason experience.

Those fans were instead treated to championships by the Seahawks, the Storm and the Sounders. They saw the SuperSonics leave and the Kraken arrive.

That led to apathy and anger among baseball fans. And a belief that the ownership at times cared more about ballpark entertainment and profit than it did about the product on the field.

But there's no doubt that when the Mariners are good, Seattle hugs the team differently from the way it embraces the other local teams.

Whether those fans will get a playoff home game to celebrate Seattle’s return remains a question. That’ll be decided in the coming days as the Mariners battle with Toronto and Tampa Bay for seeding and settle Seattle's postseason path.

But for the first time in a generation, there is a postseason to talk about in Seattle.

“A lot of people worked really, really hard for this a long time,” Seattle pitcher Marco Gonzales said. "Even when the times were dark. We didn’t see the light at the end of the tunnel. And a lot of people believed when they didn’t have a reason to. And so this is for them.”