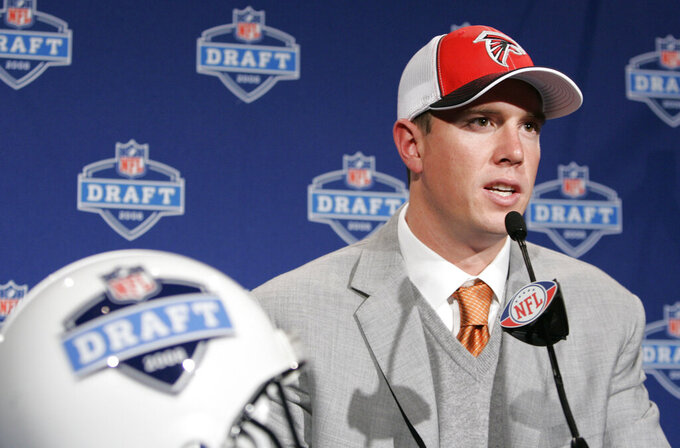 FILE - In this April 26, 2008, file photo, Matt Ryan, a quarterback from Boston College, speaks at a news conference after being selected third overall by the Atlanta Falcons during fthe irst round of the NFL football draft in New York. Ryan has started all but three games over his 12-year career, earning four Pro Bowl appearances and the NFL’s MVP award in 2016, when he led the Falcons to only the second Super Bowl appearance in team history. (AP Photo/Frank Franklin II, File)

ATLANTA (AP) — BEST FIRST-ROUND DRAFT PICK: QB Matt Ryan. Hard to go with anyone other than Matty Ice, who restored some credibility for the franchise in 2008 as the No. 3 pick from Boston College on the heels of Michael Vick going to prison for dogfighting. Ryan has started all but three games over his 12-year career, earning four Pro Bowl appearances and the NFL’s MVP award in 2016, when he led the Falcons to only the second Super Bowl appearance in team history.

BEST SECOND-ROUND DRAFT PICK: G R.C. Thielemann of Arkansas was the 36th overall choice in 1977 and quickly established himself as a stalwart on an offensive line that would power the Falcons to the first three playoff appearances in franchise history. He started all 114 games he played over nine seasons in Atlanta, earning three Pro Bowl selections. (Note: The Falcons picked a future Hall of Fame quarterback in the second round in 1991, but we’ll get to him later.)

BEST LATE-ROUND DRAFT PICK: C Jeff Van Note. A linebacker when the Falcons made him an 11th-round pick out of Kentucky in 1968, Van Note was shifted to center the following year and went on to have one of the longest careers with one team in NFL history. Over his 18-year tenure in Atlanta, he played in 246 games with 226 starts and earned six Pro Bowl appearances. Honorable mention: RB Jamal Anderson, a seventh-rounder out of Utah in 1994.

WORST FIRST-ROUND DRAFT PICK: LB Aundray Bruce. There’s plenty of competition for this unwelcome distinction, but we’ll give it to one of just four No. 1 overall picks in Falcons history. Bruce was heralded as the next Lawrence Taylor when he arrived from Auburn in 1988, but he's now remembered as one of the most notorious busts in NFL history at the top spot. Bruce somehow managed to hang around the league for 11 seasons, but he made just 41 career starts — with only 12 coming after 1989.

WORST SECOND-ROUND DRAFT PICK: C Peter Konz. Again, there’s a lengthy list of botched Atlanta picks in this normally fertile round, but the Wisconsin lineman goes down as the biggest disappointment. The 55th overall pick in 2012, Konz started 10 games at guard as the Falcons advanced to the NFC championship game. Heading into Year 2, Atlanta essentially forced long-time center Todd McClure into retirement to clear a spot for Konz. He was thoroughly overmatched, the Falcons plunged to 4-12 and Konz’s career was over after just one more season.

BEST DRAFT TRADE: GM Thomas Dimitroff made one of the gutsiest moves of his tenure in 2011, trading Cleveland a mammoth package of five picks — including two first-rounders — for the chance to move up from No. 27 to No. 6. The prize? Alabama receiver Julio Jones. While there was plenty of debate whether Dimitroff gave up too much, Jones is one of the greatest pass catchers in NFL history and likely headed to the Hall of Fame. The Browns, for their part, didn’t make any splash with any of the picks they got from Atlanta.

WORST DRAFT TRADE: Coming off their first Super Bowl appearance, the Falcons decided to make a bold move in the 1999 draft. Enamored of blocking tight end Reggie Kelly out of Mississippi State for some reason, coach Dan Reeves traded away his first-round pick the next year for Baltimore’s second-round choice at No. 42. Reeves justified the trade by saying it would help the Falcons remain one of the league’s best teams. Boy, was he wrong: The Falcons plunged to 4-12 and handed the Ravens the No. 5 overall pick, which they used on running back Jamal Lewis. All he did was help Baltimore win a Super Bowl title as a rookie and rush for more than 2,000 yards in another season.

DID YOU KNOW THEY ONCE DRAFTED?: QB Brett Favre. Yep, that’s the second-round pick we referred to earlier, selected 33rd overall from Southern Mississippi in 1991. It could have been the greatest pick in team history, but the Falcons were an especially dysfunctional group in those days. Coach Jerry Glanville didn’t want Favre and played him in just two games. His first career pass was an interception returned for a touchdown, which pretty much epitomized his dismal season in Atlanta. Favre was dealt to Green Bay for a first-round pick (wasted on running back Tony Smith) and went on to a brilliant career with the Packers. Another tidbit: Favre is one of just three Hall of Famers drafted by the Falcons, the others being Deion Sanders and Claude Humphrey.