McVay: Reeling Rams have time to reset in bye week 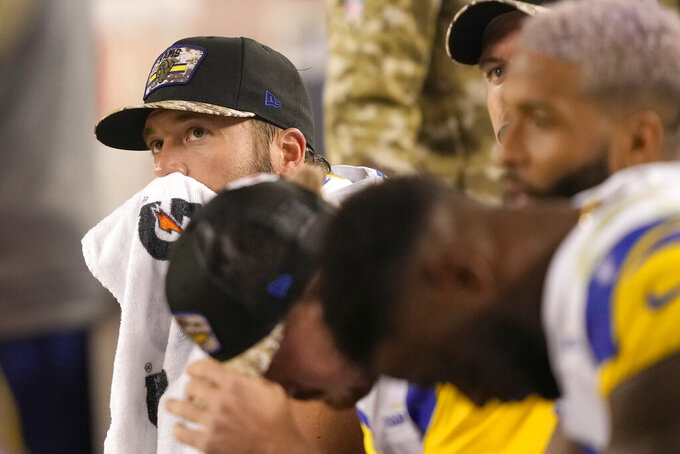 Los Angeles Rams quarterback Matthew Stafford, left, and teammates sit on the bench during the second half of an NFL football game against the San Francisco 49ers in Santa Clara, Calif., Monday, Nov. 15, 2021. (AP Photo/Tony Avelar)

LOS ANGELES (AP) — The Los Angeles Rams got the NFL's attention when they added two high-profile veteran stars to their roster in the two weeks before their bye.

Just as dramatically in the same stretch, a team that was rolling before its acquisition spree has now added two one-sided losses to its record.

The Rams (7-3) also acquired far more than just two reasons to be worried about their evident status as a teetering Super Bowl contender as they head into their bye week.

Sean McVay understands the Rams could be nearing a make-or-break point after the first back-to-back, double-digit losses of his coaching career. The 28-16 loss to Tennessee and Monday night's 31-10 thrashing from San Francisco also comprised the first stretch in which Los Angeles was held under 20 points in back-to-back defeats under the offense-minded McVay — a stunning development for a unit that appeared to be back in elite form with new quarterback Matthew Stafford.

The additions of Von Miller and Odell Beckham Jr. in Santa Clara did nothing to prevent the slide in production and execution on the field, but McVay says he needs to think about this star-studded team's mental approach as well.

While Los Angeles is thin in several roster areas that were exposed in Santa Clara, McVay firmly believes the Rams have a team that should be in contention if it can once again play as well as it looks.

“There is a trajectory on the season, and right now our trajectory is not going in the right way,” McVay said Tuesday. “Is that something that can be fixed? Without a doubt it can, and that's everything we're going to focus and concentrate on over this next week. But we are 7-3. We're not an 0-10 football team. But we haven't played good enough to win.”

McVay is already at work figuring out how to patch all the holes and leaks that have sprung in the Rams over the past two weeks, which felt “really out of whack for us,” according to the coach.

The losses had one key similarity: Stafford threw two interceptions — including a pick-6 — early in both games, putting the Rams in an early double-digit hole from which they never escaped.

Much of what happened after the turnovers was a product of being behind, and McVay will analyze the problems while realizing many of them wouldn’t have happened without those errors by the quarterback and his receivers.

"I know our players have a lot higher standards, and our coaches for the way we can play," McVay said.

Jalen Ramsey continues to shine in what might be the 2020 All-Pro’s best season. He had two tackles for loss and two pass breakups even while the Niners wisely strived to stay away from him. McVay indicated the Rams had to make adjustments when Dont’e Deayon was a late injury scratch, forcing Ramsey to play less at the Niners’ point of attack — although it highlights the Rams' weaknesses at defensive back when a player who was on their practice squad four weeks ago is now a lynchpin of their success.

Stafford's performances would be a whole lot better if his receivers would stop dropping the ball, something they did six times in Santa Clara. Jimmie Ward was gifted a pick-6 when a good pass deflected off Tyler Higbee's hands, while Van Jefferson and rookie Ben Skowronek dropped probable touchdown passes. The group performance was particularly discouraging after Robert Woods' season-ending injury. There's not a lot the Rams can do to improve this area except to count on their pass-catchers to do their jobs.

Not many choices here, but the left side of Los Angeles' offensive line thrived. Tackle Andrew Whitworth and guard David Edwards both had strong performances in pass protection and in the running game.

The Rams' linebackers continue to underwhelm. The Niners worked to exploit Troy Reeder and rookie Ernest Jones in pass coverage, while the group did little to slow down San Francisco's deliberate, grinding run game. The Rams also seemed reluctant to stack the box on defense, contributing to the trouble against the run.

The Rams' injury flow appeared to stop in this game, with McVay reporting no new issues. A bye week should allow cornerbacks Darious Williams and Deayon to heal up, along with center Brian Allen and even Miller, whose ankle appeared to be solid.

15 — Offensive snaps played by Beckham. The wideout made the first of his two receptions on the Rams' first play, but was rarely involved after that — no surprise, given he hasn't had a full practice yet in Los Angeles.

McVay says he'll use the first part of the bye week to evaluate the past two games, but he'll soon have to start planning for a rough seven-game stretch to close the regular season. Los Angeles should be rested and well-prepared next Sunday for its trip to NFC-leading Green Bay, which sent the Rams home from the playoffs last season.