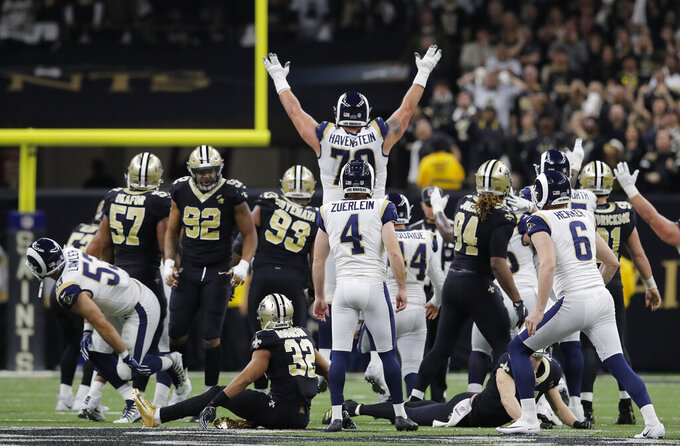 Zuerlein's injury doesn't appear to be serious, and the Rams expect him to kick in the Super Bowl next week, coach Sean McVay said Thursday.

Rams special teams coordinator John Fassel disclosed what happened to Zuerlein, but the coach wasn't even aware his kicker had injured himself until well after their 26-23 overtime victory over the New Orleans Saints.

Zuerlein made four field goals against the Saints, including three after halftime. He hit a 48-yard field goal with 15 seconds left in regulation to force overtime, followed by a booming 57-yard field goal that went in with plenty of distance to spare, clinching the Rams' first conference title in 17 years.

"Didn't seem like it affected him, did it?" McVay said with a grin.

The right-footed Zuerlein was wearing a walking boot on his left foot earlier in the week, but McVay said the team is only being cautious. He has been listed on the Rams' injury report for the past two days.

"He's fine," Fassel said. "The next morning, I said, 'Greg, why do you have a boot on your foot?' I think he didn't tell me because it was good I didn't know."

The 31-year-old Zuerlein has been one of the NFL's top kickers for several years, earning a Pro Bowl selection last season. Since the Rams moved to Los Angeles three seasons ago, he has made 84 of his 93 field goal attempts — missing just once inside 40 yards — and 102 of his 105 extra points.

The Rams face the New England Patriots next Sunday, Feb. 3, in Atlanta.