“Miracle” workers? Browns need one after loss to Steelers 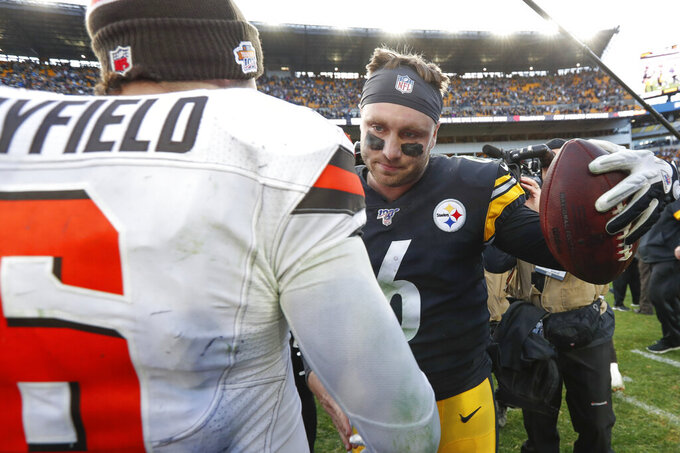 The fact the Cleveland Browns head coach decided to wear a T-shirt that read “Pittsburgh started it” in the run-up to a rematch with the Steelers was no big deal to Kitchens’ quarterback.

Besides, Mayfield’s headwear following a baffling 20-13 loss to Pittsburgh on Sunday provided a more apt message on where the Browns find themselves heading into the final month of what is looking like another lost season.

Fitting, because the Browns likely need one if they want to have any shot at playing in January. While Cleveland’s remaining schedule is user friendly, the Browns will probably need to win out and get some help after letting an early 10-point lead disappear while falling to the Steelers (7-5) on the road for the 16th straight time.

“We can't lose anymore,” Cleveland defensive tackle Sheldon Richardson said. “It's just that simple. One week at a time and we on to the next week. We dropped the ball on this week, on to next week. Short-term memory."

The Browns are in danger of missing the playoffs for the 20th time in 21 seasons since the franchise returned in 1999. Not exactly what they had in mind following a series of high-profile moves that turned Cleveland into a trendy pick to win the AFC North. The optimism of August has faded into the reality of December. The division title is already out of reach and unless the Browns get some serious help from the teams above them, so is any shot at the playoffs.

“We're going to come back, go to the lab and hope to not be in this situation again the rest of the season,” running back Kareem Hunt said.

The problem, of course, is that the Browns have already been in this situation too many times. A brutal early schedule dropped them into a 2-6 hole. Three straight victories — including an emphatic drumming of the Steelers on Nov. 14 — provided hope the team had turned the corner. Instead, Cleveland finds itself spinning in circles.

It didn’t appear that way in the opening 25 minutes against undermanned Pittsburgh. When Mayfield found Hunt for a 15-yard touchdown pass in the middle of the second quarter, Cleveland was up by 10 and the Steelers and rookie quarterback Devlin “Duck” Hodges were going nowhere.

The game swung in the final minutes of the first half. Hodges started taking advantage of a Browns secondary missing safety Damarious Randall — who did not make the trip after being benched for undisclosed reasons — and cornerback Robert Jackson, who left in the first half with an ankle injury and did not return. Hodges hit James Washington for a 39-yard lob to set up a field goal and later found Washington for a 30-yard touchdown that drew Pittsburgh even.

Mayfield then smacked his right (throwing) hand on the helmet of Steelers linebacker Bud Dupree just before the break. Mayfield returned for the second half wearing a padded white glove to help him deal with what the Kitchens described as a bruise.

Though Mayfield stressed he wasn’t in pain, he finished 18 of 32 for 196 yards with a touchdown and a pick on Cleveland’s final offensive snap when his pass intended for Jarvis Landry sailed high and into the arms of Pittsburgh’s Joe Haden.

Kitchens, who wore the shirt on Friday night at the request of his daughters, is pretty sure his team’s issues have nothing to do with his wardrobe.

But not quite ready to win in a place where they haven’t been on the right side of the score at the final gun since 2003. A two-score lead, a rookie quarterback on the other side of the ball and Pro Bowlers stuffed into the offensive huddle couldn’t keep the Browns from finding themselves in an all-too familiar position: trudging to the visitor’s locker room wondering how it slipped away.