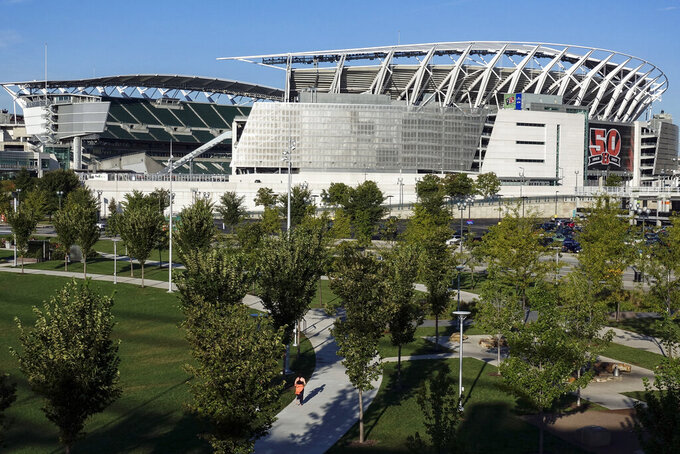 FILE - A pedestrian runs through Smale Park on the Ohio River front near Paul Brown Stadium, home of the Cincinnati Bengals NFL team, as a celebratory 50th anniversary banner is displayed outside its gates in Cincinnati, Thursday, Sept. 28, 2017. The team announced Tuesday, Aug. 9, 2022, that the venue will be called Paycor Stadium after the naming right were bought by the Cincinnati-based maker of human resources software. (AP Photo/John Minchillo, File)

CINCINNATI (AP) — The home of the Cincinnati Bengals will no longer carry the name of team founder and NFL pioneer Paul Brown.

Paycor, a Cincinnati-based provider of human resources software, has bought the naming rights to the stadium in a deal announced Tuesday. The venue will be known as Paycor Stadium.

Terms of the deal were not disclosed, but the development wasn't a surprise. Team owner Mike Brown — the 86-year-old son of Paul Brown — told reporters last month that selling the naming rights was necessary for the Bengals to be able to compete as a small-market team.

"This is a move that I do think (Paul Brown) would have agreed to," Mike Brown said. “He was always for what’s best for the football team. It’s a time now where we need a revenue stream that will help us as do such things as build the indoor (practice) facility. It’ll help us perhaps handle the cap a little bit easier. We’re a small-market team. We need the revenue streams that we can obtain.”

A Paycor spokesman, Jennifer Budres, said in an email that even though Paul Brown's name will no longer be on the stadium, his “legacy is being honored in various ways throughout the stadium.”

The Bengals' stadium beside the Ohio River has been known as Paul Brown Stadium since it replaced Riverfront Stadium as the Bengals' home in 2000.

Paul Brown was a legendary figure in Ohio and beyond. He coached at Massillon High School in northeastern Ohio and Ohio State briefly before World War II, then led the Cleveland Browns from 1946 to 1963.

Brown became part of the ownership group as a well as the general manager and coach of the expansion Bengals, initially an AFL team that began play in 1968. Brown retired in 1975 after 45 years of coaching but stayed on as team president until his death in 1991.