Newton on track to return to practice after testing mishap 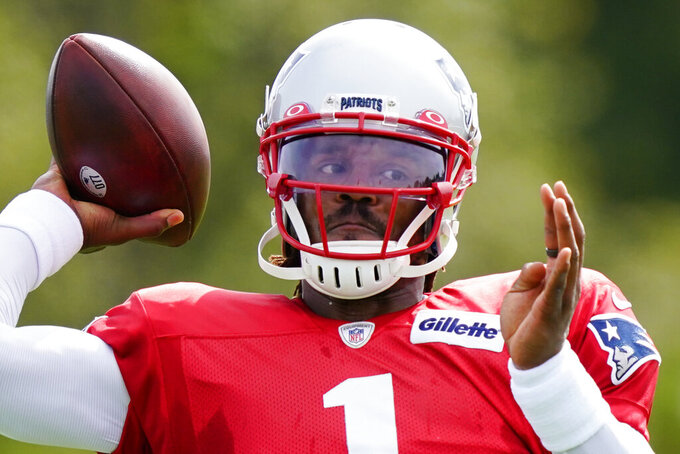 FOXBOROUGH, Mass. (AP) — New England Patriots coach Bill Belichick said Tuesday he expects Cam Newton to return to the field this week for the second day of joint practices with the Giants after the quarterback missed a second day of practice because of a misunderstanding of COVID-19 testing rules.

Newton is under an NFL-mandated five-day reentry process for unvaccinated players after traveling to a team-approved, out-of-town medical appointment over the weekend.

The Patriots issued a statement Monday about the trip, saying the quarterback had tested negative daily for COVID-19 while he was away but had misconstrued the protocols about tests conducted away from NFL facilities.

Newton's absences Monday and Tuesday were his first of training camp. Belichick confirmed he would be eligible to return to workouts on Thursday. He declined to say if he expected Newton to play in Sunday's exhibition finale against the Giants.

Asked if this incident would affect how he handles the quarterback position this season, Belichick said his only concern was adhering to the protocols.

But Belichick did acknowledge that Newton's unavailability would give rookie quarterback Mac Jones an increased opportunity while Newton was missing practice.

Newton started 15 games in his first season in New England and was re-signed to a one-year deal in the offseason. But Belichick still used a first-round draft pick on a quarterback for the first time during his Patriots tenure on Jones.

“Our entire team has opportunities every day, all through the week and against the Giants in the game," Belichick said. "I hope we can all take advantage of those opportunities.”

Giants coach Joe Judge returns to Foxborough on Wednesday to begin two days of joint practice with the Patriots. But for special teams stalwart Matt Slater, it won’t just be a reunion with his former position coach.

It will be a chance to catch up with one of the coaches he says has impacted his NFL career the most.

Judge was a special teams assistant in New England from 2012 to 2014, before serving as special teams coordinator from 2015 to 2019. During that time, Slater earned seven Pro Bowl selections and was an All-Pro twice.

“I think Joe gave me a lot of belief in myself. I think early in my career I didn’t have a ton of belief in myself as a player,” Slater said. “I struggled. I think (former special teams assistant) Scott O’Brien and Joe Judge both did a great job of instilling belief in me. Challenging me in ways that I didn’t like at times but it made me better. And just coaching me hard. No matter what I did, no matter how well I played, how poorly I played. They always challenged me.”

There was a time early in training camp when it looked as if rookie Quinn Nordin might have a chance to unseat veteran Nick Folk as the Patriots kicker this season.

Folk missed more than two weeks of practices with an unspecified injury and Nordin shined in his absence, impressing with both his accuracy and range.

But after a disastrous exhibition outing at Philadelphia last week in which Nordin missed a field goal and two extra points, attention shifted back to Folk following his return to practice Monday.

Folk, who was re-signed this offseason to a one-year contract, connected on four of five kicks in 11-on-11 drills Monday. He said his time off the field was because of some soreness early in camp.

“I was trying to take care of it, make sure I’m ready for the season,” Folk said. “I was back out there yesterday, felt good to be there. So just kind of keep going forward, get ready for tomorrow, get ready for this week with the Giants and have fun doing it.”

He said he welcomes the competition from Nordin.

“It’s always a competition,” Folk said. “Even when you’re by yourself. You have to perform day in and day out so whether he’s here or not or I’m here or not, we’re both trying to improve our position.”