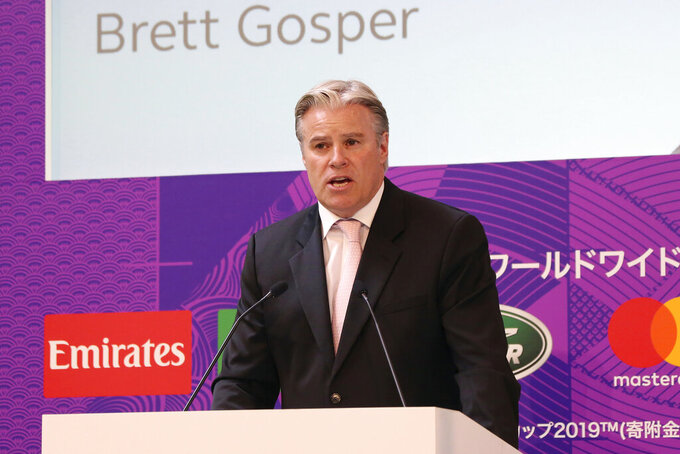 FILE - In this Wednesday, June 12, 2019, file photo, Brett Gosper, CEO of World Rugby, delivers a speech in Tokyo. As the NFL returns to London, the league is also finalizing its short list of German cities to host a game as early as next season. Brett Gosper, NFL Head of UK and Europe, said the opening of an office in Germany is “reasonably imminent,” as is the hiring of a general manager there as the league looks to expand across Europe, with France also in its sights. (AP Photo/Koji Sasahara, File)

LONDON (AP) — The NFL has returned to London with the Atlanta Falcons facing the New York Jets on Sunday but the league is just as focused on its next international destination: Germany.

Brett Gosper, NFL Head of UK and Europe, said they are finalizing their short list of German cities to host a game as early as next season.

The opening of an office in Germany is “reasonably imminent,” he added, as is the hiring of a general manager there as the league expands in Europe, with France and Spain also in its sights.

Eight cities in Germany expressed interest in becoming a partner city to host a regular-season game, he said. The NFL announced a bidding process in June.

“We will whittle down to three and we’re hoping we’ll be able to announce something in the next week or two,” Gosper told The Associated Press in an interview this week.

The announcement could coincide with NFL Commissioner Roger Goodell’s expected trip to London during the International Series.

After the Falcons face the Jets on Sunday, the Jacksonville Jaguars play the Miami Dolphins a week later. Both games will be held at the stadium of Premier League soccer team Tottenham.

Gosper declined to identify the likely German finalists but said bidders might come to London on an “observer program” for the Jags-Dolphins game.

“They're in the final bid,” he said. “There’s some sensitivity on their side in particular because they have to go through their own appropriate decision making. We’ve made sure these cities formed a consortium so it will be a partnership between the region, the city, the owner of the stadium — which in most cases is a Bundesliga football club."

A regular-season game in Germany seems a question of when, not if, with a decision expected by the end of the year. He said the “only hesitation” on 2022 would be scheduling conflicts with soccer's World Cup, which begins next November in Qatar.

A suitable stadium is the biggest factor, followed by ease of travel. Tottenham’s state-of-the-art facility was built to host both soccer and NFL games with capacity seating of 62,850.

The cities of Dortmund, Berlin, Gelsenkirchen, and Stuttgart each have a stadium — and Munich has two — capable of holding at least 60,000 fans, with soccer club Borussia Dortmund’s the largest at just over 81,000.

Sky Sports, which has the broadcasting rights for the NFL in Britain, earlier reported that Munich and Dusseldorf expressed interest but that Berlin did not, due to laws on commercial promotions.

It’s not just about size. Gosper said they’re looking for a “deeper relationship than just a game once a year,” citing grassroots partnerships and an NFL Academy.

A league office in Germany is upcoming.

“It’s reasonably imminent because we’re at the intense phase of a search for a general manager. Where we decide that would be set up might depend on where we land on a possible game in Germany,” said Gosper, the Australian former CEO of World Rugby.

After Germany, NFL analysis has shown that France would be the next logical European host.

“It would seem that France is probably the third market in that sense in the analysis that we’ve done, followed by Spain,” Gosper said. “The Nordics are very strong too, with a smaller population base.”

The NFL has played 28 regular-season games in London from 2007-19. None were played in the city in 2020 — when four were scheduled — because of the pandemic.

Wembley Stadium has also held games, particularly hosting Jacksonville’s as the Jags have built a large fan base in Britain.

“We don’t have total certainty yet but we’re confident that the Jags will continue that relationship into the future,” Gosper said. “The number of games, we’re not sure of at this point.”

And with an expanded 17-game schedule, as well as the new opportunity for NFL teams to negotiate exclusive marketing deals with cities or regions around the world, there are possibilities for even more games in London.

Gosper said the NFL is reviewing marketing plans of teams interested in “deploying internationally” and they could “decide themselves to host the occasional game outside the (home) market.”

“It’s hard to determine at this stage whether we head back to four, three or five (games),” Gosper said. “That will be determined by the market. But there’ll be no less than two in the UK and probably, high likelihood, of more.”

The annual question of whether the Jags would relocate full-time to London hasn’t been discussed, he added.

“We'd love a franchise to come to London one day, obviously, because it’s going to help grow our fan base not just in London but across Europe, as well, given the proximity. It’s now up to any owners — if that’s what they’d feel they’d like to do, then we’re ready for it. But that’s entirely their call.”

By Pat Graham 43 minutes ago
By Arnie Stapleton 4 hrs ago
By W.g. Ramirez 7 hrs ago
By Brett Martel 9 hrs ago
By Dan Greenspan 9 hrs ago