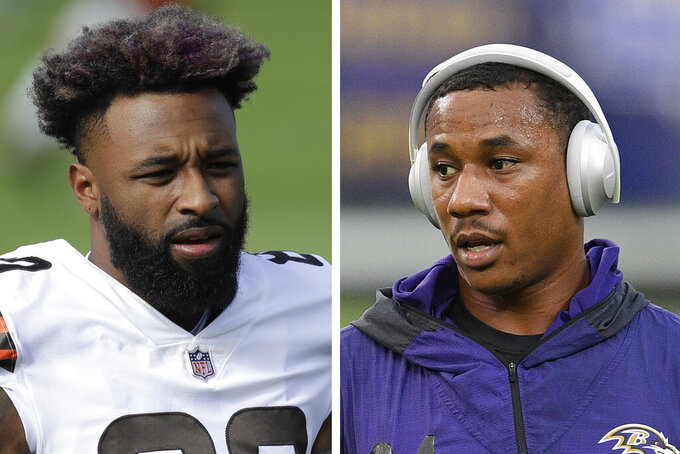 CLEVELAND (AP) — Ravens cornerback Marcus Peters can deny it all he wants, but the NFL thought he spit at Browns wide receiver Jarvis Landry.

The league fined Peters $12, 500 on Saturday for his actions, which were followed by a back-and-forth verbal battle between the players this week.

Peters was fined for unsportsmanlike conduct despite not being penalized during Baltimore's 47-42 win over Cleveland.

TV footage caught Peters spitting in Landry's direction at the end of the first quarter. Landry had his back turned and didn't know what Peters had done until after the game.

“I think he knew that maybe behind my back he could do things like that, but to my face he wouldn’t,” Landry said. "So I take it for what it’s worth and now I know. Everybody knows what type of player he is, what type of person he is.”

Peters said in a statement released by the Ravens that he didn't spit at Landry.

“Where I come from, when you have an issue with someone, you deal with it face to face, man to man,” Peters said. "Anyone who believes that I intentionally spit at him does not know me — plain and simple.”

Following the game, Peters was filmed by a teammate on the team's flight calling Landry and Browns receiver Odell Beckham Jr. “home girls.”

"No way would Marcus do that,” Harbaugh said. “I know Marcus really well. That’s not his style anyway. If he was upset, he wouldn’t be doing that. What he did was, he spat in that direction. It wasn’t in anybody’s direction, per se, and you could tell that on the clip.”

Browns coach Kevin Stefanski declined to comment on the situation.

There has been bad blood between the Browns and Ravens — who were the Browns before moving to Baltimore in 1996 — over the past few seasons.

Last year, Ravens defensive back Marlon Humphrey put his hands around Beckham's throat and appeared to choke after the two wrestled following a play.