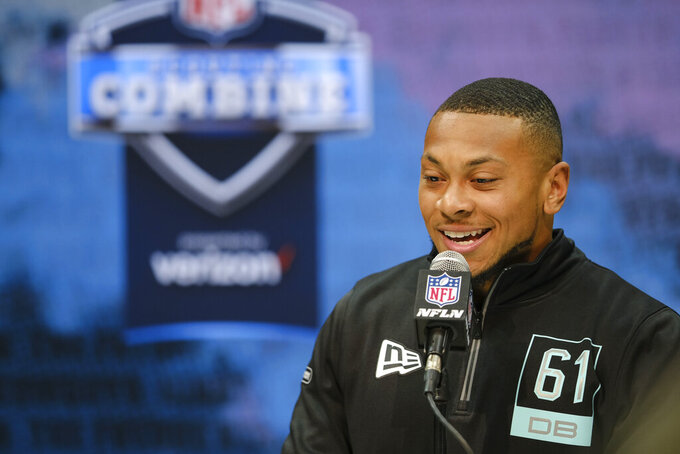 INDIANAPOLIS (AP) — University of Georgia defensive back JR Reed knew all about the NFL scouting combine long before he had the chance to grip the dumbbell at the Indianapolis Convention Center or spring from the launch pad at Lucas Oil Stadium.

His father, Jake Reed, was a wide receiver in the NFL for 12 seasons with the Vikings and Saints. His uncle, Dale Carter, played defensive back for a dozen seasons in the NFL with stops in Kansas City, Denver, Minnesota, New Orleans and Baltimore.

"From my dad, one of the things I learned at an early age is it's never too early to start being a pro," Reed said Friday. “And then from my uncle, it's just to be mean, nasty, and get after the ball and get after everybody, man.”

Having family football ties not only gave Reed a head start as a kid, but it helped prepare him for the combine, where most of the 330 prospects tap their college coaches or former teammates who have gone pro for advice.

"It's definitely an advantage to have family in the NFL and just to lean on them for their expertise," Reed said. "My dad has helped me throughout this whole process."

"I think it gives us the upper hand," said Minnesota defensive back Antoine Winfield Jr., whose father played 14 seasons in the NFL. "If you have family members that have been through it first-hand. ... they'll pretty much tell you everything you need to know prior to coming to an event like this."

Actually, they've been gleaning valuable tips most of their lives.

"At a young age, I was getting taught things that no other kids were thinking about, having an All-Pro dad that played football," Winfield said. “He'd be out in backyard doing footwork, so I'm out there with him doing footwork at an early age. Watching film at a young age. Doing everything that most kids wish they had.”

Reed and Winfield are among some half dozen players in Indianapolis this week with famous fathers, uncles or brothers who have played in the NFL.

The son of Hall of Fame receiver Randy Moss said his famous father is a great resource growing up.

"He's helped me all the way up to this point in my career. He's been through a lot and seen a lot, so he has answers for everything," the younger Moss said. "And this process itself, it's nothing new. It's nothing changed."

Among his fondest childhood memories was the Patriots' 18-1 season when his father caught 23 of Tom Brady's 50 touchdown passes.

“Meeting Tom Brady when I was younger, I was sitting there starstruck,” Moss said.

Catching a pass from Brady now "it'd mean a lot," Moss said. "Just to catch a touchdown pass, period, in the NFL would mean a lot. To catch it from Tom Brady, knowing that he threw a good amount of touchdown passes to my father, it would be a good story."

His father, Montae Reagor, was a defensive linemen for nine years in the NFL and played for the Broncos, Colts and Eagles.

"He's helped me a lot, just giving me info, giving me insight, letting me know what to do, what not to do, and the ins and outs of the game," the younger Reagor said.

Reagor said his fondest childhood memory of his father was "him winning the Super Bowl and then him coming to get me out of the stands," after the Colts beat the Bears in 2007 when Reagor was 8.

He was born on New Year's Day 1999, about four months before his father was drafted in the second round, 58th overall by Denver.

"He wants me to go as high as possible," Reagor said. "All he does is support me. He was a great player in the league and won a Super Bowl. It's not really a competition."

He has the same name and plays the same position as his father, who was drafted 23rd overall by Buffalo in 1999, played five years for the Bills and nine for the Vikings.

"I knew at a young age this is what I wanted to do with my life," Winfield said, "It's just surreal feeling to be here right now."

The younger Winfield packs 205 pounds on his 5-foot-10 frame, 25 pounds more than his father.

When he was 11, "my dad would lay in his bed with his laptop and I sat next to him watching film," Winfield recalled. "In particular, I remember it was Calvin Johnson when they had to play Detroit one week. I was sitting next to him watching it and he was breaking the film down. That was good experience."

In his interviews this week, "every team I went to people either played with him or coached him. They remember my dad," Winfield said.

He's five years younger than his brother, Vikings WR Stephon Diggs, who served as a father figure following their dad's death at 39 of congestive heart failure in 2008.

"He was like my dad when my father passed, he was always taking care of me. I always asked him everything. No matter what, if it was 2 o'clock in the morning I could ask him questions. I could ask him about his experiences, his process, how he managed things. There were a lot of things I asked him," the younger Diggs said.

His older brother didn't hold back when it came to football.

"He always critiqued me. We never talked about the good things. We always talked about the bad things and things we could do to get better," Trevon Diggs said. "He always gave me tips and little cues to work on my game. I'm blessed to have that. I don't have someone patting me on the back all the time and telling me I'm doing good. I've got someone who's telling me, 'Let's get to work.'"

The first NFL game Diggs saw in person was the "Minneapolis Miracle," when his brother caught Case Keenum's winning TD pass against New Orleans in the playoffs two years ago.

"Just to see him make that catch, it was amazing," Diggs said. "I was tremendously happy for him."

He said he can't wait to cover his brother in the NFL, sure that he'd get the better of the matchup.

“Because the younger brother is always better than the big brother."

The nephew of former NFL punter Matt Turk, who played 17 seasons, and ex-NFL offensive lineman Daniel Turk turned heads at the combine when he wowed clubs with his upper-body strength. He recorded 25 reps of the 225-pound bench press, the most by a punter since 2003, per NFL Research.

Although leg strength is what teams really want to see, his bench press numbers were more than 19 offensive linemen at the combine, including Iowa's Tristan Wirfs (24) and Louisville's Mekhi Becton (23).